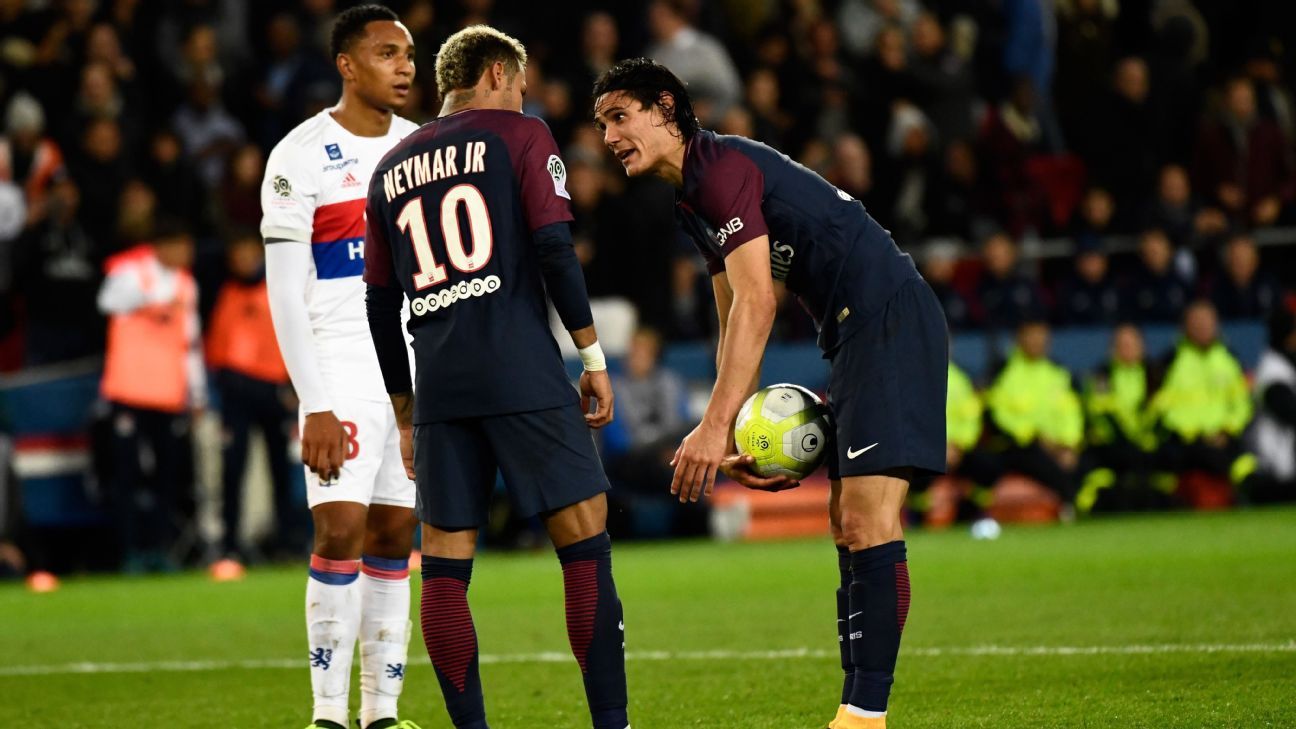 
PARIS — Paris Saint-Germain coach Unai Emery acknowledged the growing tension between Neymar and Edinson Cavani after their 2-0 win over Lyon at Parc des Princes on Sunday.

PSG have won all six of their opening Ligue 1 matches and are three points clear at the summit of Le Championnat after a pair of own goals secured them all three points against Lyon.

However, Neymar and Cavani were at odds over a free kick and a penalty during the second half, while Dani Alves did not help by getting involved in the set piece disagreements.

Speaking postmatch, Emery admitted that the power struggle between the Brazilian superstar and Cavani could quickly become an issue if the players cannot agree with each other.

“I have told them to sort it out between themselves,” the Spaniard declared during his postmatch news conference. “I think that they are capable of doing that and that they will both be our kickers.

“If they cannot reach an agreement, I will decide for them. I do not want this to become a problem for us.”

Elsewhere, Kylian Mbappe made his Parc des Princes debut for his new club and nearly marked it with a goal.

Jeremy Morel was ultimately credited with an own goal but Mbappe, whose efforts led to the second for PSG, praised his teammates and insisted that the Brazilian contingent within the squad is not a problem after a successful maiden league appearance in the capital.

“It was a great debut,” Mbappe told Canal+. “It was a complicated match, a good game against a good side.

“Together, we can do beautiful things. We proved ourselves here. I am enjoying myself. I am also learning a lot. I am going to develop plenty and I have a lot of work to do here. I will progress well alongside these players and staff. The club has placed its confidence in me. I am trying, little by little, to repay their faith.

“It is a great group of players. I was a little apprehensive because it is a star-studded squad. However, the chemistry is strong here. There are many Brazilians — this helps the good mood!”

Alves, who clearly hid the ball from Cavani and gave it to Neymar before a second-half free kick praised Lyon’s effort but insisted PSG deserved their win.

The Brazil international also championed Les Parisiens‘ “team performance” despite a few flashes of individualism and selfishness at times.

“There is emotion because of the win,” Alves told Canal+. “The Lyon team were very fast and this complicated matters. They positioned themselves well and closed us down well. However, we achieved our goal by winning. We put in a team performance. We hope to keep doing that.

“It was tough. Lyon knew what they had to do. They closed the game down and left little space to exploit. We committed a few mistakes in the first half. We were not pressing that well and Lyon were well and truly in the match. In the second half, we did better, our positioning was better. I feel we deserved to win.”

Giovani Lo Celso came on as a second half substitute and helped to decide the match in PSG’s favour by creating the opening goal with a brilliant turn and cross from an acute angle.

The Argentinian was happy with his contribution as a substitute after coming on for Julian Draxler with 18 minutes to go.

“It was important to beat a rival like Lyon,” said Lo Celso. “We worked well in this match because it was difficult and we were not afforded much space.

“When I came on, I wanted to give everything to help the team. For the goal, I picked up the ball, took out the defender and then put in the cross for Edinson. It ended up in the back of the net, so I am happy.”

PSG travel to Montpellier HSC next weekend and can add to their 100 percent start in Ligue 1 before the visit of Bayern Munich in the Champions League.