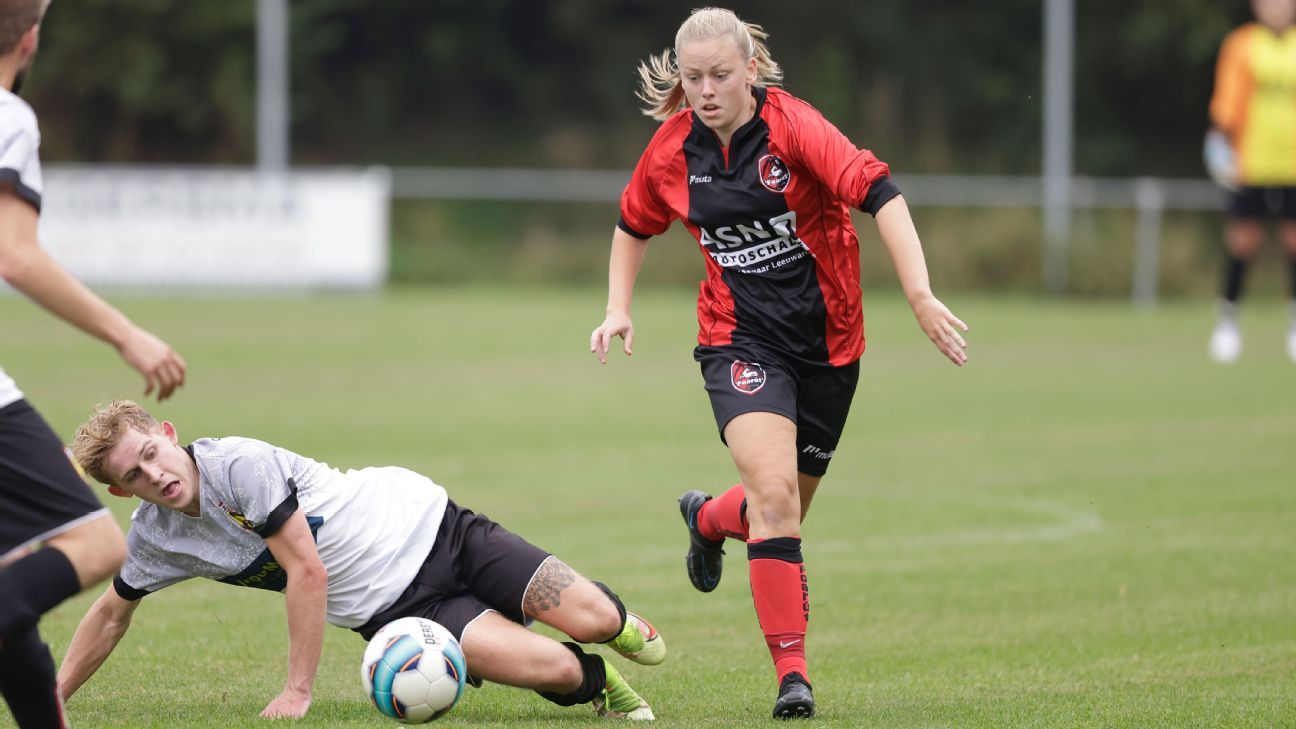 
VV Foarut midfielder Ellen Fokkema has a typical matchday routine: ride her bicycle through the beautiful Friesland fields to the Schatzenburg sports complex in the small village of Menaam, in the north of the Netherlands (about 90 minutes’ north of Amsterdam), where she sees the same faces at the club that’s been her home since the age of five. But Saturday would prove to be anything but normal, as the 20-year-old learned she was going to be on the bench in the club’s “4e Klasse” (ninth tier) opener against Sleat. Not for her usual U19 side, but for the senior men’s team.

In the 60th minute, she made Dutch football history as the first pro woman to play for a senior men’s team in league play.

In May 2021, the KNVB (Dutch Football Association) announced a change in its eligibility rules — thanks to Fokkema’s perseverance, passion and talent — that would allow women to play in senior men’s matches. While mixed football is allowed at youth level and in “category B” amateur teams, she’d previously not been allowed to play at a higher level for a men’s team. But that all changed when Fokkema was given the nod by her coach Janco Croes and walked on to the pitch in front of around 150 spectators to make football history.

Fokkema is used to playing alongside and against men; she has the scars on her leg to prove it. She looks at areas where she could use her nous and speed to get an advantage, just like her hero, Barcelona midfielder Frenkie de Jong. “I play smart, otherwise I’ll never win, that’s biologically determined,” she told ESPN.

The week running up to the match was typical, with two training sessions fitted around her studies. But although she tried to keep everything as normal as possible, Fokkema knew the significance of playing in Saturday’s match. Last Tuesday, she was working in the emergency department at the local hospital, with six months left in her studies before she qualifies as a nurse, but she’s since helped make a seismic shift in football.

“I guess it’s a milestone for soccer in general,” Fokkema said. “Women will be able to choose in which team to play… that’s new, that they have the choice. I hope I won’t be the last, or else it would have all been for nothing.”

Fokkema was five years old when she started playing for VV Foarut. “Back then when I was young, the opponents were like, ‘Hey, there’s a girl!’ But my hair was short, so most people never noticed. I kind of did that on purpose so no one would notice,” she said. Both Ellen’s sisters Jenny and Marianne play football — her brother Auke tried it out, but it wasn’t for him — having inherited their mother Klaske’s passion for the game.

The community has been cheering for Fokkema since she was young. Menaam is a village where everyone knows each other, with a population of just 2,665, and the local football club, VV Foarut, is a family environment where everyone grows up together. Six of the boys she used to play alongside are still with her, 15 years later; they were at her 18th birthday party, they celebrated the wins and picked apart the losses together. All the while, she grew resilient to her opponents’ taunts.

“I used to take the free kicks, that used to really upset the opposition when they went in,” Fokkema says. “Sometimes they’d say, ‘Hey, this isn’t ballet,’ but the next minute I’d outrun them and that feels great.” However, just before she turned 19 years old, it looked like she was no longer going to be permitted to play alongside her friends.

The Dutch FA’s rules prohibited women from graduating to the senior men’s team in the fourth division, meaning that those who played for a single club through the youth levels would have to look for a new team when they turned 19. It left Fokkema with two options: play for the reserves alongside people she didn’t know too well, or move to a women’s side. She had received offers from Heerenveen’s professional women’s side, but chose to prioritise her medical studies and also just wanted to continue playing with her friends.

“I felt like one of the guys and I wanted to be on the first team with them,” Fokkema said.

VV Foraut took this into account; in December 2019, club representative Auke Grijpma wrote to the KNVB asking for special dispensation so Fokkema could continue playing in the men’s team. They didn’t get a response, so they tried again in February and sent a third letter in March.

“I think at first we [at the Dutch FA] didn’t really know what to do with the request,” Roos Brouwer, senior employee in the KNVB’s football development department, told ESPN. “Because we needed to figure out how the regulations were at that time and I imagine people first thought: ‘let see how serious this request is and if they will be persistent and come back again.'”

They would eventually respond; in August, 2020, the KNVB announced a pilot scheme through which Fokkema would be permitted to play for the men’s senior team. She made seven appearances for her club as part of the trial; a representative from the KNVB came to watch her and interviewed her afterwards about the experience.

“They’d also ask the opponents how they felt about it,” Fokkema says. “They [the opponents] didn’t say much to me — after the game, [I got] a fist bump and that was it.”

When another rise in COVID-19 cases meant amateur football was cancelled in late-October, it brought the pilot scheme to an abrupt end. “I loved the higher level. It’s all a bit faster and a bit more brutal, but I play smart rather than tough.” Fokkema said. “But I love the camaraderie.”

The club submitted their dossier to the KNVB, advocating that the trial should result in a permanent change to the eligibility laws in Dutch football. There were few other cases in world football for the KNVB to consider. Professional men’s football teams have made offers for women in the past. Perugia tried to sign German legend Birgit Prinz in 2003, while in 2016 Canadian side Calgary Foothills (playing in the USA’s fourth-tier Premier Development League) signed Canada women No. 1 Stephanie Labbe, only for the league to block the move. It would have been no shock had the KNVB opted against changing their eligibility rules.

But then, in early-May 2021, the KNVB called a Microsoft Teams meeting with Fokkema and her club. They had looked at all the evidence and agreed she should be allowed to continue playing alongside her friends.

“We’ve tracked her during practice matches, cup matches, and league matches during the pilot and there was not a single reason not to do it,” Brouwer said. “So we allowed it, but we keep tracking it, of course. The most important remains the safe place for women to play football.”

They planned out how they’d deal with the expected influx of outside attention and on May 11, they issued a press release from KNVB director of amateur football Jan Dirk van der Zee: “Based on the current information and recent research results, we no longer see any reason to stick to this [previous rule] and opt for equality and diversity. We want girls and women to find a suitable place in the football landscape based on their qualities and their own ambitions.”

While there were roughly 150 women playing B-Category football in the Netherlands (a level of teams predominantly filled with the reserve sides of senior men’s clubs), Fokkema had changed football in the country. No longer would women have to apply to play.

“When it was announced, I then realised [how big a deal it was] — before I thought it would be the same as I used to be, just me playing soccer,” Fokkema said. “But then I was on the news. It was really strange. My phone was hot: I wanted to throw it out of the window! But it was one day, then one week where it was busy, but then it calmed down.”

In the run-up to Saturday’s game, she played a couple of preseason matches and three cup games, but the match against Sleat was a milestone. In the end VV Foarut lost 4-0, and Fokkema admitted that it will take a few more games before she can call this all a “success.” She found the TV cameras strange and the attention a little bewildering, but was delighted with the impact that her appearance could make.

Sources have told ESPN there have already been expressions of interest in the KNVB’s findings from Germany and England. The KNVB isn’t expecting women to play professional men’s football in the near future but say “it isn’t fully impossible.”

While Fokkema hopes this moment will inspire others to “just continue being yourself,” she just wants to continue playing football for the club which means so much to her. “I still don’t realise how big this is really,” she adds. “I am still believing that I am just playing with my friends. For me, there’s not much different. But around me, I can see there is a lot of change.”