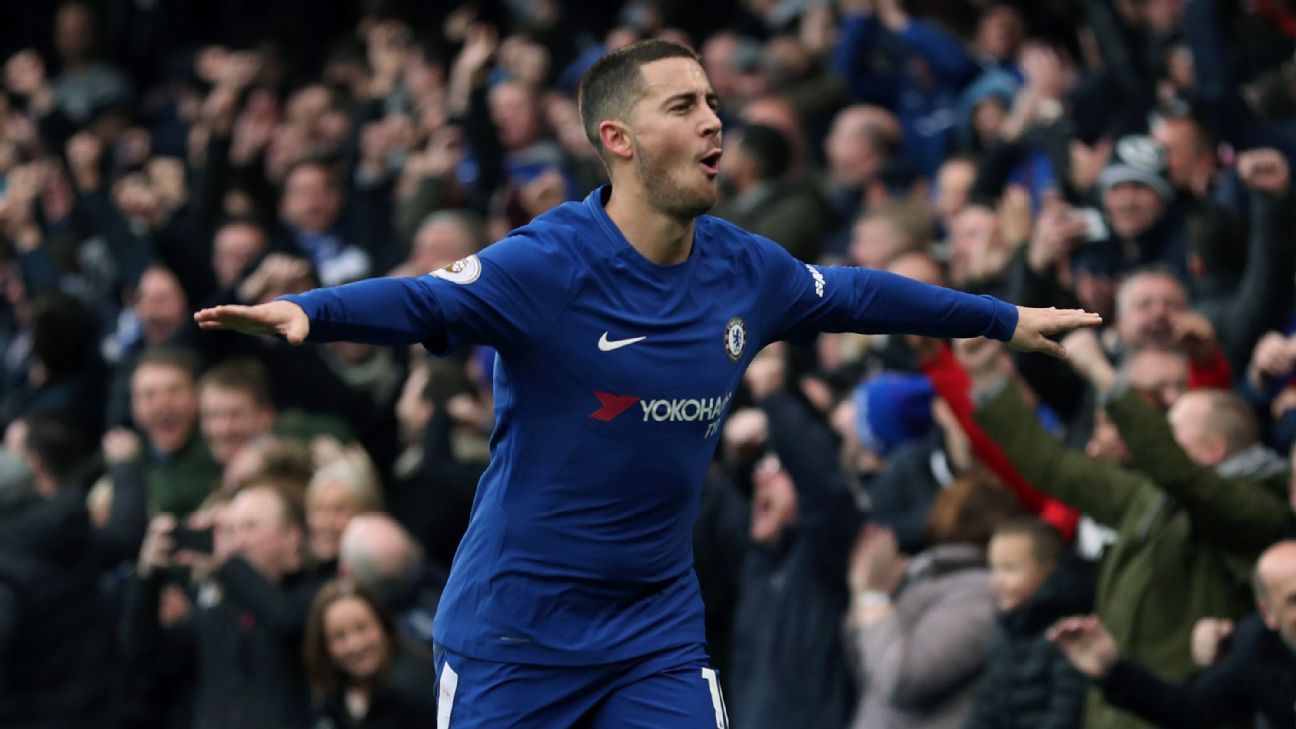 
If Chelsea’s season has been as unpredictable as ever, one thing that has remained constant has been the persistent speculation over the futures of Eden Hazard and Thibaut Courtois. And this week has been no different.

Both the Belgian stars have had their say on the matter in recent days and have given differing, if not entirely contrasting, answers to the inevitable questions. On the surface, Courtois has provided the more encouraging response by saying that he will be a Chelsea player next season no matter what. But while that might be music to the ears of Blues’ supporters, it is important to note that there was no commitment to signing a new contract with the Londoners. With only a year remaining on his present deal, it is a situation that is bound to make his employers nervous.

Hazard has been more evasive, reserving any thoughts about where he might be continuing his club career until after this summer’s World Cup. There was the talk about having two years left on his contract and being happy at Chelsea though in truth those are just the usual platitudes rolled out by players who want to keep their options open and their cards close to their chest.

Chelsea supporters have seen this before, especially with Hazard. It seems that every summer there are rumours linking him with a move away with Europe’s most glamorous clubs courting him behind the scenes. And yet, he has not gone anywhere. This time, however, it feels slightly different.

The twinkle-toed genius recently turned 27, the age where it is traditionally felt that outfield players are entering their prime. That in itself might be of no concern were it not for the fact that Chelsea face an uphill task to qualify for next season’s Champions League. It was Chelsea winning the competition in 2012 that prompted Hazard to sign with them in the first place though in the intervening years he has never won it himself, reaching a solitary semifinal.

The ambition to lift the biggest prize in club football surely factors greatly in his thinking, making Chelsea’s possible absence a major obstacle to him signing fresh terms. Then there is the fact that his next contract is likely to be the biggest of his career given his age and stature. The lure of earning an inflated salary while gracing the latter stages of the Champions League might understandably prove more tempting that locking himself into an extended stay at a club in the Europa League that does not even know who their manager will be next year.

If Hazard is possibly getting itchy feet, then Courtois is in less of a rush and for good reason. At 25, he is still a baby in goalkeeping terms with the prospect of another decade playing at the top level. As long as he maintains his form — or preferably improves it after an indifferent campaign — he will continue to spark interest in his services for years to come.

Additionally, he also holds all of the aces in any negotiations as he is about to enter the final 12 months of his Chelsea contract. Courtois will surely understand the value of being a free agent and the threat to his employers of becoming one. Should Chelsea fail to match their goalkeeper’s ambitions, the club hierarchy might just decide to cash in on him this summer rather than lose him for nothing.

All parties, therefore, will be viewing the forthcoming World Cup as a shop window. Star in Russia and interest will gather pace. While that might give the players some negotiating power, it could also help Chelsea. If Hazard and Courtois do ultimately see their futures away from Stamford Bridge then an excellent World Cup campaign would see prospective employers asked to part with eye-watering sums to secure them. That will either fill Chelsea’s coffers or dissuade interested parties altogether.

If both were to leave for exorbitant sums this summer then Chelsea would surely be in receipt of well over £200m, something that would mesh with the economising now being pursued by the board. Though that in itself has challenges. Tottenham received £90m when Gareth Bale left for Real Madrid in 2013 and subsequently went on a £108m spending spree, bringing in Paulinho, Christian Eriksen, Nacer Chadli, Roberto Soldado, Etienne Capoue, Vlad Chiriches and Erik Lamela. Almost five years later only two remain, Eriksen and Lamela. Both have proven to be astute purchases, even if Lamela took an age to adapt to the Premier League, though the rest failed to cut it at Spurs. A bulging transfer kitty means little unless it is spent wisely, something that cannot currently be guaranteed at Chelsea.

Perhaps Chelsea, if they win their final eight league games and claim a top four finish, can render these quandaries obsolete. If not though, expect the speculation to gather greater momentum over the coming months.