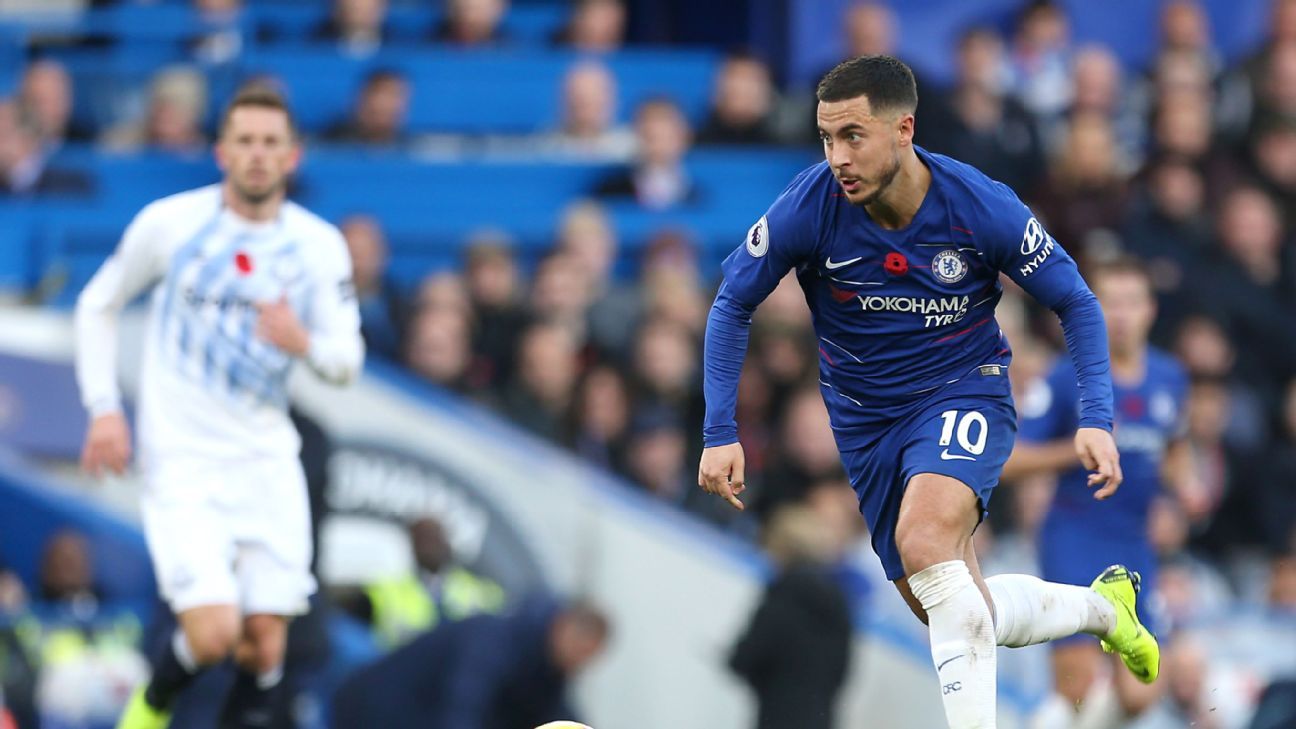 
Chelsea remained unbeaten but dropped points for only the third time this season as Everton earned a 0-0 draw in a frantic and physical game at Stamford Bridge, more memorable for fouls than chances.

Maurizio Sarri’s unbeaten start goes on and Chelsea played isolated pockets of exhilarating one-touch football against Everton, with Eden Hazard in particular looking closer to the man who dominated the first three months of the Premier League season.

Chelsea’s loss of control — both in terms of possession and discipline — in the face of Everton’s intelligent and aggressive high pressing will alarm Sarri. Jorginho could and perhaps should have been sent off, and better teams will make Chelsea pay dearly for such defensive lapses.

7 — Sarri’s decision to pick Mateo Kovacic ahead of Ross Barkley, presumably to tighten Chelsea’s grip on possession, only partly worked. He never stopped looking for ways to win the game, though, and Hazard’s bright performance was a vindication of his careful management of the Belgian’s fitness.

GK Kepa Arrizabalaga, 7 — Not forced into regular action by a wasteful Everton side on the counter-attack, but commanded his area well and reacted well to tip Gylfi Sigurdsson’s long-range shot over his bar.

DF Cesar Azpilicueta, 6 — His battle with Bernard ebbed and flowed and he almost gifted the Brazilian a golden chance by getting drawn too close to David Luiz. Richarlison often drifted over to his flank, but Azpilicueta did well not to let several faster opponents get away from him.

DF Antonio Rudiger, 6 — Plays with real presence these days at the heart of the Chelsea defence, and his recovery speed was important in nullifying Richarlison. His underrated passing also fell just short of making Everton pay for their high line. Got involved in a silly exchange with Bernard that got him booked.

DF David Luiz, 6 — His sloppy passing encouraged Everton in their pressing early on and got his teammates into sticky situations. Once he settled down he handled Richarlison reasonably well, avoiding silly fouls, but this wasn’t his best game of the season.

DF Marcos Alonso, 7 — Chelsea’s most dangerous attacking player for long spells. He worried Jordan Pickford with one curling free kick and forced a great save from England’s No.1 with a sensational volley. Also struck the outside of the post in the second half, and supplied several dangerous crosses.

MF N’Golo Kante, 6 — It’s a wonder that anyone even attempts to dribble on a pitch being patrolled by both Kante and Idrissa Gueye, and the presence of both contributed to the fragmented nature of the game. Got an early yellow card for an uncharacteristic scythe on Richarlison but recovered well.

MF Jorginho, 5 — Charged with setting the tempo for his team in possession, and Chelsea moved the ball too slowly for much of the first half. He was also lucky not to be sent off for a horrendous challenge on Sigurdsson. Perhaps he was feeling the effects of his midweek exertions against BATE Borisov.

MF Mateo Kovacic, 6 — Neat and tidy on the ball, but didn’t do much to justify his selection ahead of Barkley here. Didn’t attack the penalty area too often and when he did, his unwillingness to use his left foot made him slightly predictable.

FW Willian, 6 — Barely got a kick in the first half, but improved as Chelsea did in the second. Came closer than anyone to exposing Everton’s high defensive line, firing one low shot just past Pickford’s post and floating one dangerous cross in for Morata.

FW Alvaro Morata, 6 — Still went to the ground too much for Stamford Bridge’s liking, but it felt in keeping with the physical nature of the game. Carried a threat whenever Chelsea got the ball into good crossing positions and never stopped trying, but he gets caught offside far too often.

FW Eden Hazard, 7 — Spent much of the first half searching for his best rhythm, but showed signs in the second that he is almost fully back. Sarri’s decision to move him more central tilted the game in Chelsea’s favour and when he didn’t test Pickford himself, his creation caused panic in the Everton defence.

MF Cesc Fabregas , 6 — Replaced the tiring and booked Jorginho on 64 minutes and almost played a couple of decisive passes in the final third. The defensive risk in putting him at the base of midfield didn’t come to pass here.

FW Pedro, 6 — Never got an opportunity to showcase his lethal finishing in the final 22 minutes of the game.

MF Ross Barkley, N/R — Came on with eight minutes remaining, having been booked and jeered mercilessly by the travelling Everton fans as he warmed up, and could not find a way to make the kind of decisive impact he did as a substitute against Manchester United.