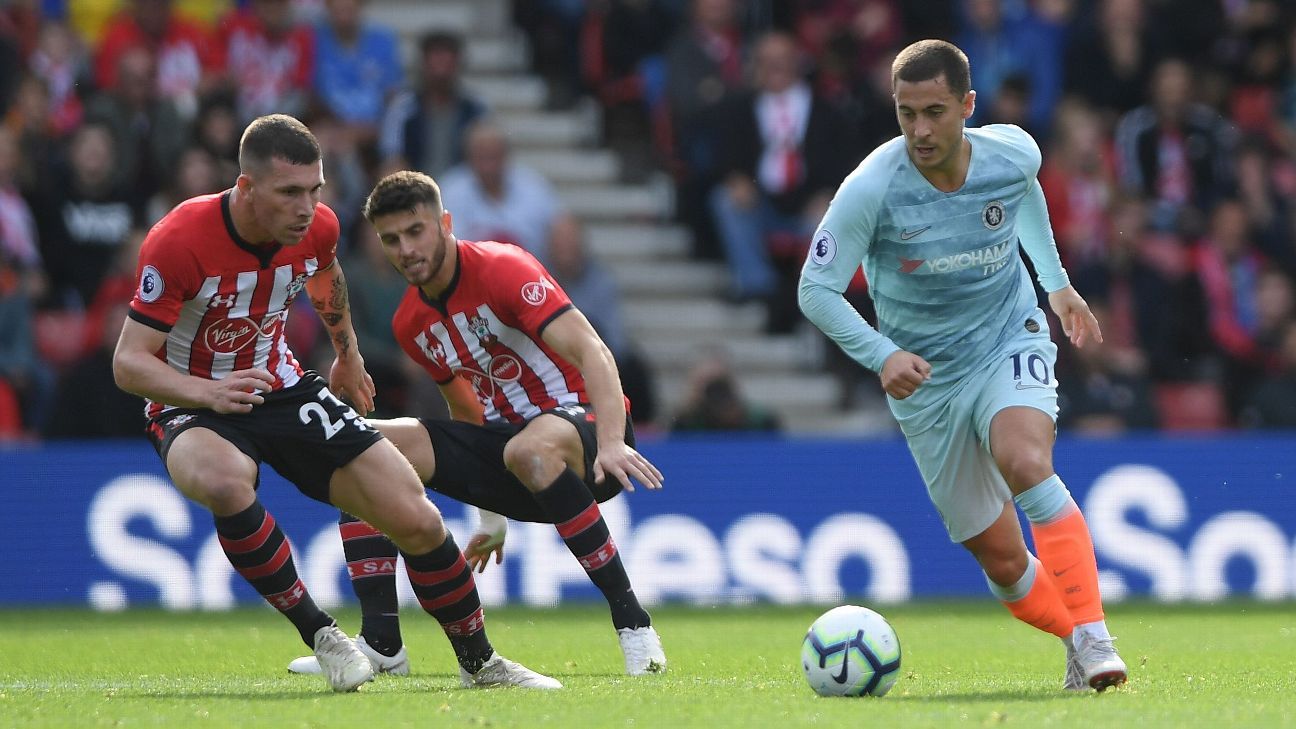 
Chelsea’s unbeaten start under new manager Maurizio Sarri continued with a 3-0 win over Southampton at St. Mary’s. Eden Hazard was the architect in chief of this impressive victory opening the scoring and playing in Alvaro Morata for the Blues final goal. In between, Ross Barkley, recently recalled to the England squad, made it a week to remember by scoring his first goal for the London club.

Southampton had their chances to make a game of it but Chelsea goalkeeper Kepa Arrizabalaga pulled off several excellent saves to keep the home side at bay.

Chelsea head into the latest international break with buoyant morale following this emphatic win. The Blues owe much of their continued success to Hazard’s scintillating form however the emergence of Barkley as an attacking threat and Morata finding the net provide equal reasons to be cheerful.

Chelsea’s inability to make the most of the corner-balls they win is becoming alarming. 18 against Vidi in the Europa League on Thursday and a further 12 today, all without profit suggests there is work to be done on the training ground. Defensively, despite the clean sheet there remain concerns over the ability of Sarri’s preferred backline to optimise their manager’s plans.

8 — Sarri’s big call today was starting Ross Barkley ahead of Mateo Kovacic and the decision was vindicated as the midfielder gave Chelsea an added cutting edge up front. He also made his substitutions at the right time, the key one allowing Morata sufficient time to score his second goal in as many games.

GK Kepa Arrizabalaga, 9 — A spectator for much of the first-half, Kepa suddenly found himself called into action pulling off a string of brilliant saves as Southampton tested his reflexes. The 24-year old also caught the eye with some excellent distribution when clearing his lines.

DF Cesar Azpilicueta, 5 — Found the going tough at right-back, particularly in the first half when Ryan Bertrand ran him ragged. Looked more solid after the break but the question has to be asked about his effectiveness in this position in Sarri’s template back four.

DF David Luiz, 7 — Dependable enough and had to be on point to cover for Antonio Rudiger’s occasional lapses of concentration. Played some decent balls out from the back and linked up well with Jorginho

DF Antonio Rudiger, 5 — Continually had problems keeping tabs on Danny Ings and had the Saints’ striker’s wastefulness in front of goal to thank for a clean sheet credit. Culpable of conceding possession which put Luiz under added pressure.

DF Marcos Alonso, 7 — Has taken time to adjust to playing left-back as opposed to wing-back in Sarri’s system but from a defensive point of view, this was arguably his best performance of the season. Made some decent runs forward and provided a reminder of the attacking threat he can pose.

MF Jorginho, 7 — Although it’s very easy on the eye, Jorginho over-elaborated Chelsea’s midfield play at times and he was too reliant on Kante and Barkley to keep a tighter rein when Southampton muscled him off the ball.

MF N’Golo Kante, 8 — A dynamic performance that saw Kante covering Jorginho’s back and linking up well with Hazard and Barkley to help Chelsea maintain their high-press.

MF Ross Barkley, 9 — Trusted with a start by Sarri, the ever-improving Barkley gave Chelsea added goal-threat from midfield. Anticipated opportunities to win the ball and made some telling passes including a slide-rule assist for Hazard to score before going one better and rippling Southampton’s net himself for his first Blues goal.

FW Willian, 6 — Saw a lot of the ball both in open play and from set-pieces but disappointingly there was no end product. Conceded possession several times to put his side under pressure and was withdrawn in the 75th minute.

FW Eden Hazard, 10 — Another extraordinary match-winning display from Hazard brought with it a goal and assist. The Belgium international was a constant torment to Southampton’s backline who had no real answer to his creativity, pace and world-class skill.

FW Oliver Giroud, 8 — Made an excellent foil for Hazard’s wizardry. Held the ball up well and was unlucky not to win a penalty in the first half when it looked like he had been brought down by Wesley Hoedt. Provided an acrobatic assist for Barkley to tap in Chelsea’s second.

FW Alvaro Morata, 7 — Replaced Giroud in the 68th minute and must have thought his luck was going to be out when he fired a shot at Southampton keeper Alex McCarthy. Made amends for squandering the chance by sealing Chelsea’s win with a fine finish lofting the ball over McCarthy.

MF Mateo Kovacic, NR — Replaced Barkley for the final 10 minutes of the game and continued where his teammate had left off with a decent cameo of tackling and passing.