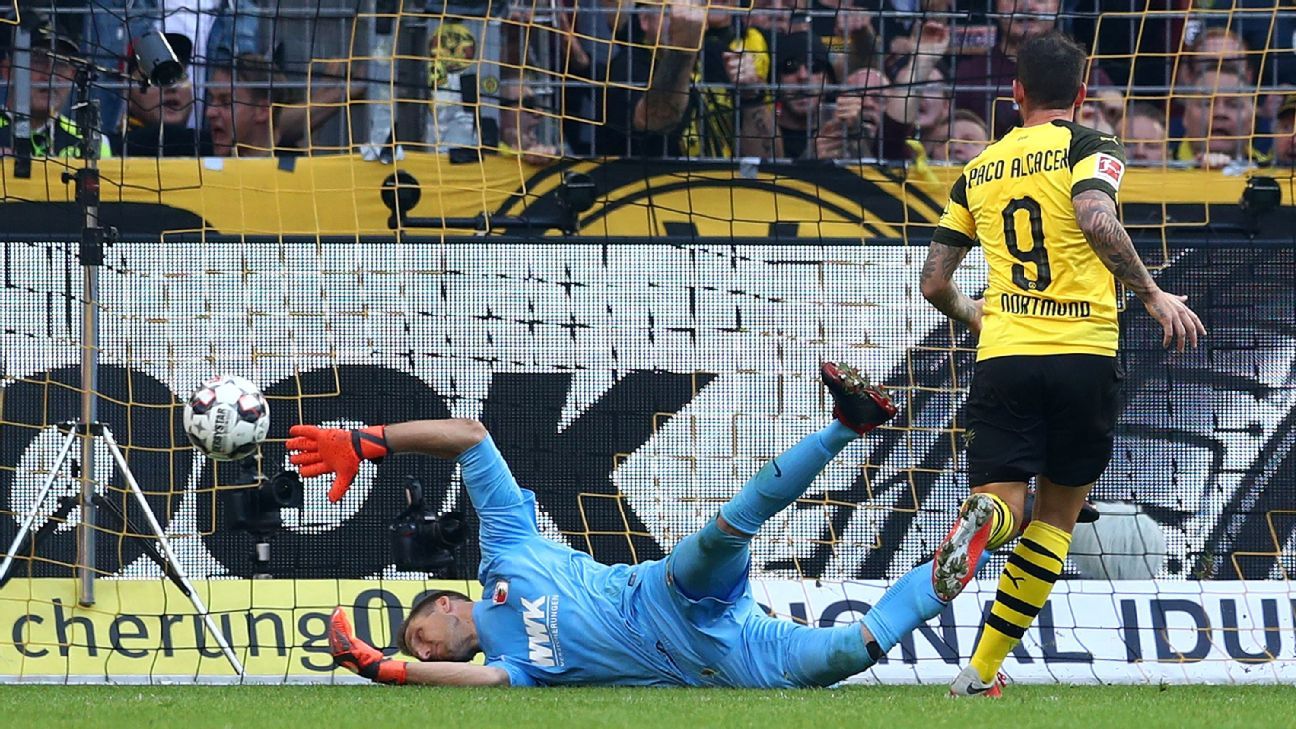 
DORTMUND, Germany — Former Barcelona striker Paco Alcacer said he might be experiencing the best moment of his career after scoring a hat trick in Borussia Dortmund’s 4-3 win against FC Augsburg on Saturday.

Alcacer, 25, sent the Westfalenstadion into a frenzy as he scored a dramatic winner in the sixth minute of stoppage time from a direct free kick from 25 yards out after already having netted twice.

In an interview with Sky, he said after the match: “Maybe this is the best moment of my career. Goals are not the most important thing, but the ability to help the team.”

The forward, who was called up for Spain for the upcoming international break, had scored just moments after being brought on the field at the hour mark to equalise Augsburg’s lead 1-0 lead.

He is the Bundesliga’s leading scorer with six goals despite having only played 81 minutes as a muscular injury has limited his involvement.

Alcacer joined BVB on a one-year loan in the summer after not featuring in Barcelona’s plans. Asked if he wanted to stay in Dortmund after his loan, Alcacer replied: “Why not?” Dortmund have an option to sign the striker permanently for €23 million.

Meanwhile, Dortmund sporting director Michael Zorc praised Mario Gotze’s mentality after the match. He told reporters: “Mario Gotze showed an absolute professional mentality. It [was] tough weeks for him but he kept working and never complained.

“Today he helped us to turn the game around and you saw that he received a very warm reception from the fans. That was good.”

Gotze scored in his first Bundesliga appearance of the season after being brought on in the 77th minute.

The 26-year-old caught his younger brother Felix Gotze napping in the 84th minute, leaving the Augsburg defender in his dust as he scored for the temporary 3-2 lead.

Zorc continued: “I thought our comeback against Leverkusen was unique in its nature but today was even crazier from an emotional standpoint as the game went back and forth like a seesaw.

“We showed the ultimate resolve to win this match. Today, we had to pay tribute to our packed schedule in recent weeks. After the 3-0 win against Monaco, we had a couple of injuries that prohibited the coach from rotating as much as he might have liked.

“Augsburg was just as uncomfortable as predicted. You mustn’t go down 1-0 here with tired legs but Lucien [Favre] once again showed a golden hand with his substitutions. All goals were scored by players that came off the bench.

“The emotions ran extremely high today, and I don’t think I’ve seen the stadium boil like it did today in a very long time with the beginning of stoppage time.”

Borussia Dortmund extended their lead at the top of the table to three points over second-placed Borussia Monchengladbach, who beat Bayern Munich on Saturday afternoon 3-0. Bayern trail the Black and Yellows by four points and sit in fifth place after seven rounds.