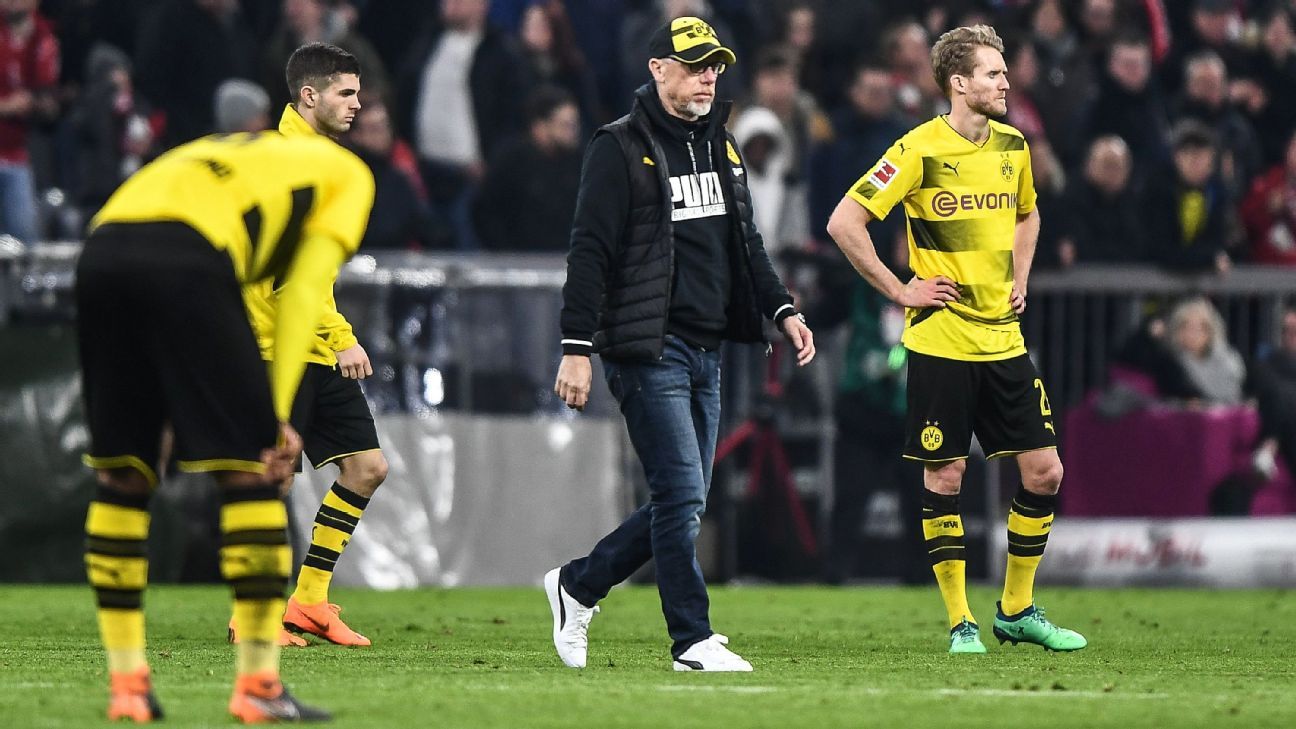 
DORTMUND — One week after a 6-0 shellacking at the hands of Bayern Munich, the shockwaves of the bitter defeat can still be felt in Dortmund.

It was less of a statement victory by the league leaders than it was of a statement defeat of Borussia Dortmund. It didn’t come as a surprise that the Black and Yellows were failing to execute a tactical game plan to a tee given they had been under the tutelage of three different coaches in the past year in Thomas Tuchel, Peter Bosz and Peter Stoger, who all have different approaches to the game. However, it was not only a matter of being tactically inferior to Bayern Munich, but more importantly that Dortmund lacked spirit.

The rule of thumb is that BVB fans are very forgiving when it comes to bad performances as long as they gain the impression that the team left it all out on the field. However, the current team has failed on a regular basis to leave that impression and hence the disenfranchisement in the stands has been growing rapidly.

When BVB resumed training on Tuesday after an Easter break, they didn’t seem like a team trying to bounce back from a humiliating defeat. Instead, the players continued where they had left off in Munich, playing 11 against 11. The body language was expressionless, challenges weren’t physical as players relied on their technical ability to solve problems — not always successfully. Nuri Sahin and Roman Weidenfeller, two veterans that hardly play a dominant role on matchdays, were the only players loudly communicating on the field while the rest remained mostly mute.

Meanwhile, Stoger was standing on the sidelines observing a hapless training session run its course without intervening or correcting his players. All in all, it painted a bleak picture of a group that hadn’t been a team in the truest sense of the word in a long time.

Unsurprisingly, a lot of BVB fans were wistfully reminiscent of former days when the credo was “no man gets left behind” rather than “every man for himself,” as Jurgen Klopp’s Liverpool dismantled Manchester City 3-0 in the Champions League on Wednesday night with the overbearing energy and determination that once had been a trademark of his former team.

Blaming Stoger for the lack of togetherness within the Dortmund squad, however, would be unjust as his two predecessors had maligned the lack of virtue just as much in previous seasons. Furthermore, it is difficult to make detailed assessments about the team’s mental status 12 months after the bombing of the team bus on April 11, 2017, as players have revealed last month in court that they are still dealing with the horrific event. Yet, it is undeniable that changes have to be made by the club in order to reach the level they already had been on not too long ago.

The first encouraging strides have been made by BVB. CEO Hans-Joachim Watzke and sporting Michael Zorc deserve a lot of credit for coming to the conclusion that they need new input and new ideas after too many decisions on the transfer market haven’t come to fruition.

Last week, the club announced the appointment of Matthias Sammer in an external advisor role. He will be in Dortmund every two weeks and lend his expertise via telephone conferences when he can’t be on site.

The 50-year-old is undoubtedly one of the brightest minds in German football and has a notable history with Dortmund. Sammer was part of BVB’s most successful era between 1993 and 1998, he won back-to-back championships and the UEFA Champions League with the club as a player. Between 2000 and 2004 the east German took over first as assistant coach and then as head coach to win another championship in 2002 with Dortmund.

Sammer, famous for his relentless winning mentality, has received a lot of credit for Bayern’s treble-winning season as he acted as technical director for the German record champions, but ultimately stepped down due to health problems in 2016. Watzke quipped in an interview with WAZ that Sammer’s absence was noticeable at Bayern and said that he was looking forward to the ruthless analysis he could bring back to Dortmund.

Meanwhile, Sebastian Kehl has been installed to ultimately become Zorc’s successor in 2021. The former Dortmund captain completed the UEFA management study and his coaching license before starting as a new team manager. BVB want to build a bridge between the training grounds on Adi-Preissler-Allee and the club offices near the Westfalenstadion.

It remains to be seen whether the introduction of two strong characters like Sammer and Kehl can bring the club back on track in the long-term but it is an important signal that Dortmund’s bosses have the serenity and confidence to second-guess themselves.

To achieve long-term success, however, short-term success is vital for the Black and Yellows, who are desperate to qualify for the 2018-19 Champions League. With a relatively tough run-in, Sunday’s clash against 8th-placed Stuttgart turns into a must-win.

Stuttgart will arrive with an unbeaten streak of eight games since Tayfun Korkut took over at the coaching position from Hannes Wolf in February. Stoger found a lot of praise for his counterpart at Friday’s news conference, saying: “I have to compliment Tayfun Korkut. He’s done really well after already being written off before his appointment. I followed that with a lot of fun but the fun stops on Sunday!”

The Austrian coach is banking on his team to show a reaction after the 6-0 loss, citing positive responses in the league to torrid performances on the European stage. He will be helped by the return of midfielder Marco Reus and centre-back Omer Toprak, who overcame muscle injuries. The team must display a spirited reaction on Sunday in order to get the fans behind them once again, which has an even higher priority one week ahead of the Revierderby against Schalke.