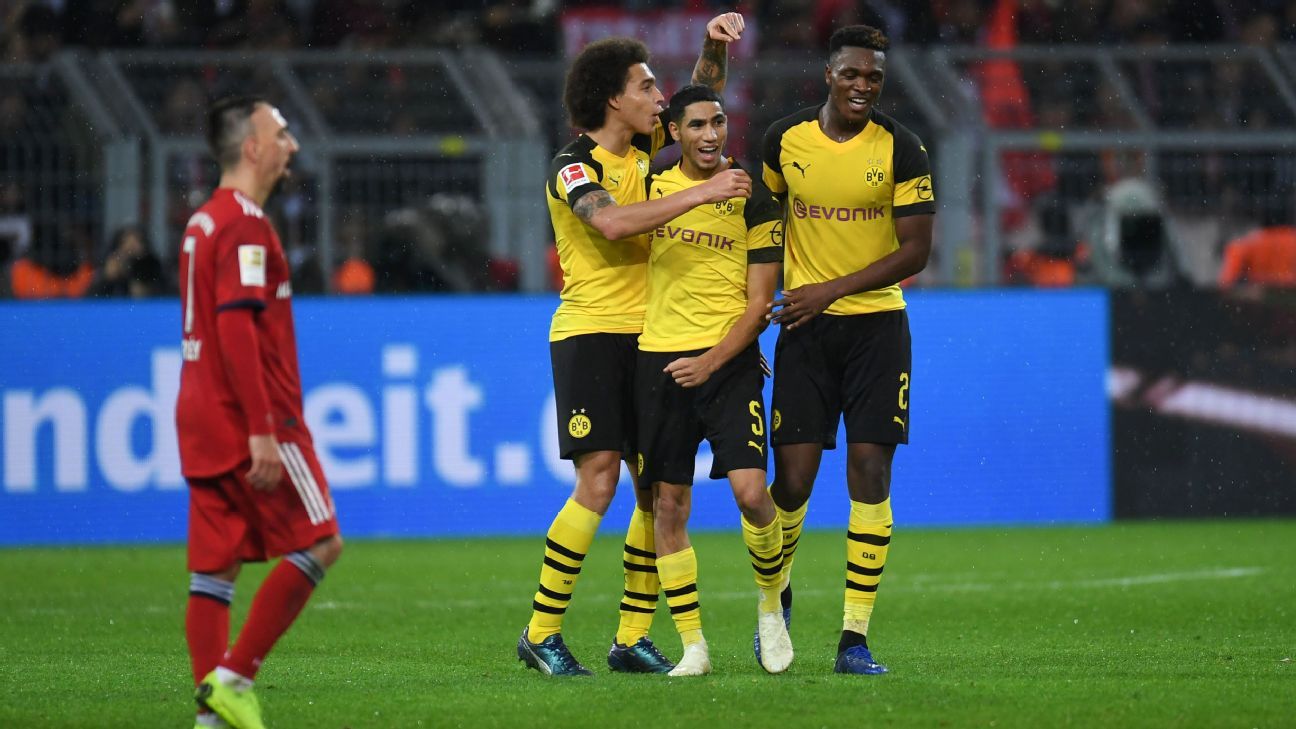 
At the end of the best Bundesliga game in recent memory, a helter-skelter affair bursting with class and incidence, there really wasn’t all that much in it. The champions were perhaps missing 30 centimetres, half a metre at best, to come away with a 3-3 draw that would have dramatically reaffirmed their sense of exceptionalism and felt like a bitter defeat for the contenders from Westphalia.

Suddeutsche Zeitung’s proclamation that Saturday had seen “the tearing down of the Bayern Munich monument” seemed a little overblown in light of such small margins, as did the mixed-zone talk of “a change of the guard” in German football that greeted the 3-2 scoreline and Borussia Dortmund’s seven-point gap at the top.

Mats Hummels, unsurprisingly, didn’t agree with the premise at all. Yes, Dortmund had been very good; yes, there was “no reason to suggest they weren’t now favourites to win the league,” he admitted. But “change of the guard” sounded too much like “a permanent thing” for his taste. Experience has taught the Germany international that supposed paradigm shifts can be short-lived. Many had hailed BVB as the new dominant force in the Bundesliga when he and his teammates had won the double in 2012 under Jurgen Klopp, only to see a reinvigorated Bayern strike back to all but crush their upstart rivals.

For much of the first hour of that thoroughly entertaining tussle at Signal Iduna Park, the visitors were seemingly spurned on by a desire to show the much-praised league leaders their true position in the pecking order. Niko Kovac’s men were sharp, aggressive, dominant on the ball, exuding a ruthless muscularity. What they lacked in ideas in the final third, they made up for with determined running, creating overloads on the flanks. There was even a rare fluidity of thought and movement in evidence; never more so than when Robert Lewandowski headed home for Bayern’s second goal after a sweeping move down the right.

Lucien Favre had made a couple of mistakes to help the Bavarians gain traction. His introduction of the more cultured Julian Weigl to the middle of the park backfired badly, with the rusty midfielder getting repeatedly overrun. Mario Gotze as false nine in place of the altogether more real forward Paco Alcacer didn’t do much for BVB’s counter-attacking prowess. Too many opportunities to hit Bayern on the break had gone begging due to a lack of penetrative runs into the box. Worst of all, the home side’s deep block was too passive to keep the red tide at bay.

Managers rarely get it all right. The very good ones are distinguished by their ability to recognise problems and to rectify them, quickly. Favre excelled in that respect once more. He told his players that Bayern wouldn’t be able to keep up their pace after the break and to press higher. While Bayern visibly ran out of steam and could not add fresh impetus from the bench, Favre’s substitutes Mahmoud Dahoud, Thomas Delaney and Alcacer radically changed the course of the game and forced a win that might ultimately decide the title race.

Dortmund’s rapid improvement in the second half was the reason why this utterly compelling game resonated much more than the somewhat fortunate scoreline by itself warranted. Those last 30 minutes were a microcosm of the two clubs’ respective seasons. On the one hand, you had Bayern, railing against the dying light with all their might and experience but ultimately falling a little short, for want of new ideas and legs. On the other side, there was a Dortmund who had learned all the painful lessons of the disastrous 2017-18 campaign and made all the necessarily adjustments on and off the pitch to give themselves a much better chance to break the red hegemony.

It wasn’t just a win for the new over the old, but one for honest self-appraisal over make-believe. Bayern can no longer pretend that their half-baked squad and the combination of an inexperienced manager with a weak sporting director make for a winning formula.

A source close to Kovac told ESPN FC on Saturday that the Croat will continue to enjoy the backing of the board for the time being. But a wider inquest is coming. Dortmund have done Bayern a service by exposing their weaknesses, just as they did during the successful Klopp years. They must now use that momentum to win the title, ahead of the inevitable backlash next season.