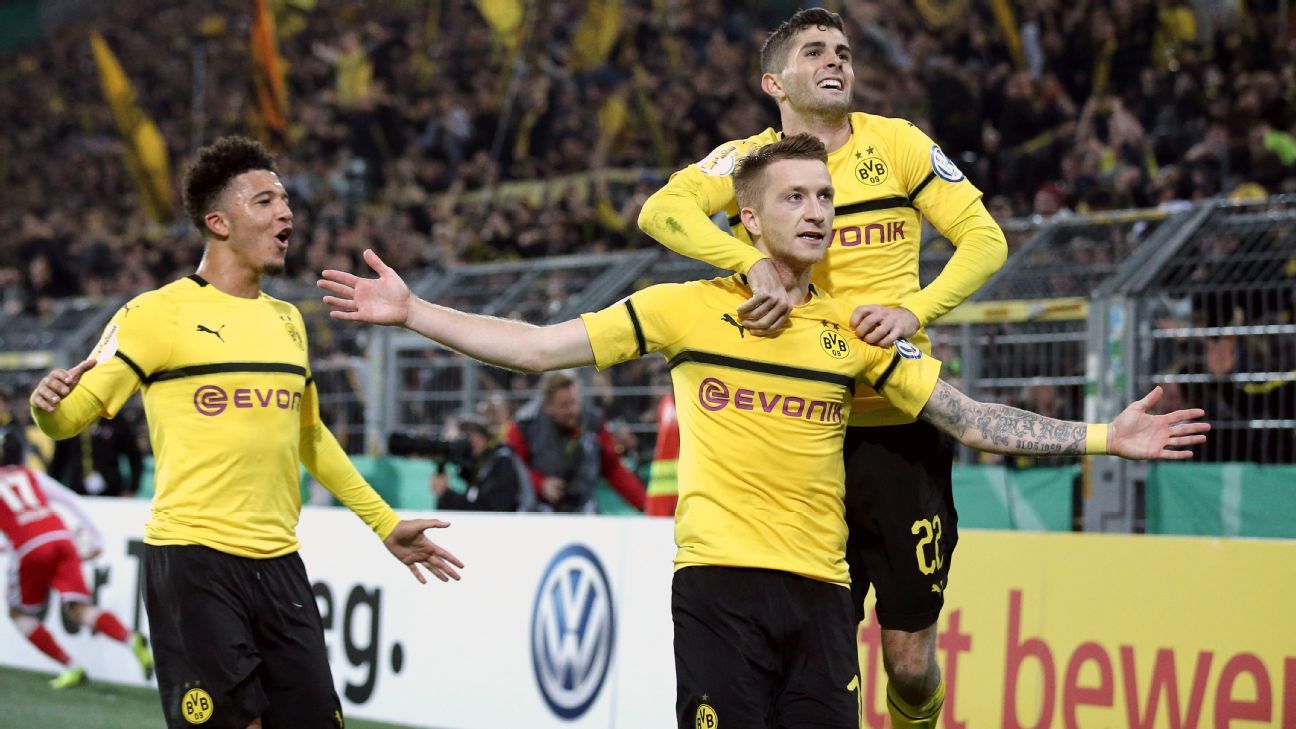 
Bayern Munich president Uli Hoeness has an unofficial job title, too — “Abteilung Attacke” — but ahead of the Bundesliga Klassiker against Borussia Dortmund on Saturday night, the self-styled “attack department” struck a remarkably defensive tone.

“We won’t go there as favourites,” the 66-year-old said, adding that “the world won’t end” if his club were to fail to win the championship after six successive Bundesliga titles.

The sudden discovery of perspective and humility at Sabener Strasse makes for an unusual build-up to Germany’s most-eagerly awaited club game in years, a daunting match Bayern can ill-afford to lose if they want to avoid a seven-point deficit, and the inevitable media circus that will accompany it, heading into the international break. There is, however a telling precedent. The last time the record champions travelled to Signal Iduna Park sitting below BVB in the table, back in April 2012, Munich’s bosses were making similarly understated noises. Their caution proved justified: Jurgen Klopp’s Dortmund won 1-0 to open up a six-point gap and pave the way to a historic double.

Regardless of this year’s outcome, there are a quite a few noticeable parallels. The spine of the current team — Manuel Neuer, Jerome Boateng, Franck Ribery, Thomas Muller and Arjen Robben — were all in the starting XI five-and-a-half-years ago. At the time, Dortmund were rightly hailed as a tactically advanced side, playing breathtaking attacking football, while the Bavarians were overly reliant on sparks of individual brilliance on the wings and suffering heavily from the board’s failure to adequately strengthen the squad.

In Christian Nerlinger, they had a young sporting director unable to carve out a niche for himself within the club’s power structure. At the end of the season, the former Bayern and Rangers midfielder was replaced by the much more forceful Matthias Sammer, who now works as an external consultant for Borussia and is partly credited for their big improvement.

Belgian midfielder Axel Witsel, another new recruit who’s had a big hand in making Dortmund a better functioning entity by virtue of this experience and leadership, detected an element of gamesmanship in Hoeness’s statement.

“Of course they’re going to say that! Because we are first in the championship and we are playing well,” the 29-year-old told ESPN FC. “Right now, it’s not the Bayern Munich everybody knows. But it’s still Bayern Munich. And we have to be careful about them.”

Witsel knows a trap when he sees one. Unlike in 2012, though, the visitors’ ostentatious timidity is not just an exercise in reverse psychology and mind games, but a message for Bayern’s own. The very obvious move by Hoeness to dial down expectations is expressly designed to relieve the pressure of manager Niko Kovac. The Croat’s position in Munich would become “untenable” in case of a defeat, at least according to former Bayern professional, Dietmar Hamann. The club are preemptively closing ranks. At least that’s the image they want to project, in anticipation of a wider inquest that would be bound to follow a negative result.

Witsel’s gushing praise for BVB coach Lucien Favre — whose obsessive attention to detail has seen individuals take rapid strides forward and the team playing with a admirable blend of structure and creative chaos — appears in marked contrast with the relentless dressing room whispers at Bayern, where players are still waiting for Kovac to impart useful instructions that might bring out their potential up front.

“Even when we play really good, on the video when we have a meeting, he always speaks about the things we didn’t do well,” said Witsel of Favre’s coaching style, citing his insistence on right-footed players control with their left in order to decrease the time it takes them to strike the ball.

“I think this is good. Sometimes you say ‘way did he say that to me?’ but in the end, he’s right. The small details are important in the game.”

Witsel also believes that with the help of the crowd, his side could deliver a second marquee result of the season having already inflicted a 4-0 defeat on Atletico Madrid in the Champions League. “If everybody is ready — 100 percent physically, technically and playing the football we are doing now, at home with our fans — we can beat them,” he said.

Things have gone so well for Dortmund on and off the pitch, especially relative to Bayern, who look stale and disjointed by comparison, that there’s a danger of over-estimating their quality a little bit. German bookmakers make Bayern favourites to win the match, probably due to their ability to create as many good chances cumulatively as the league leaders have done even if they’ve needed many more attempts than Favre’s men to do so. Defensively, Bayern have actually been more solid.

Sometimes, though, football follows a deeper logic that’s not immediately mirrored in the numbers. Bayern’s many problems — the coaching, the transfer policy, the dysfunctional corporate structure — might ultimately not be grave enough to stop them either winning the game nor the league this year. But the unexpectedly profound progress Dortmund have made under Favre has, for the first time since 2012, at least put them in a position to punish the perennial champions for their self-inflicted weaknesses. It would be amiss of the Black and Yellows not to take the opportunity.