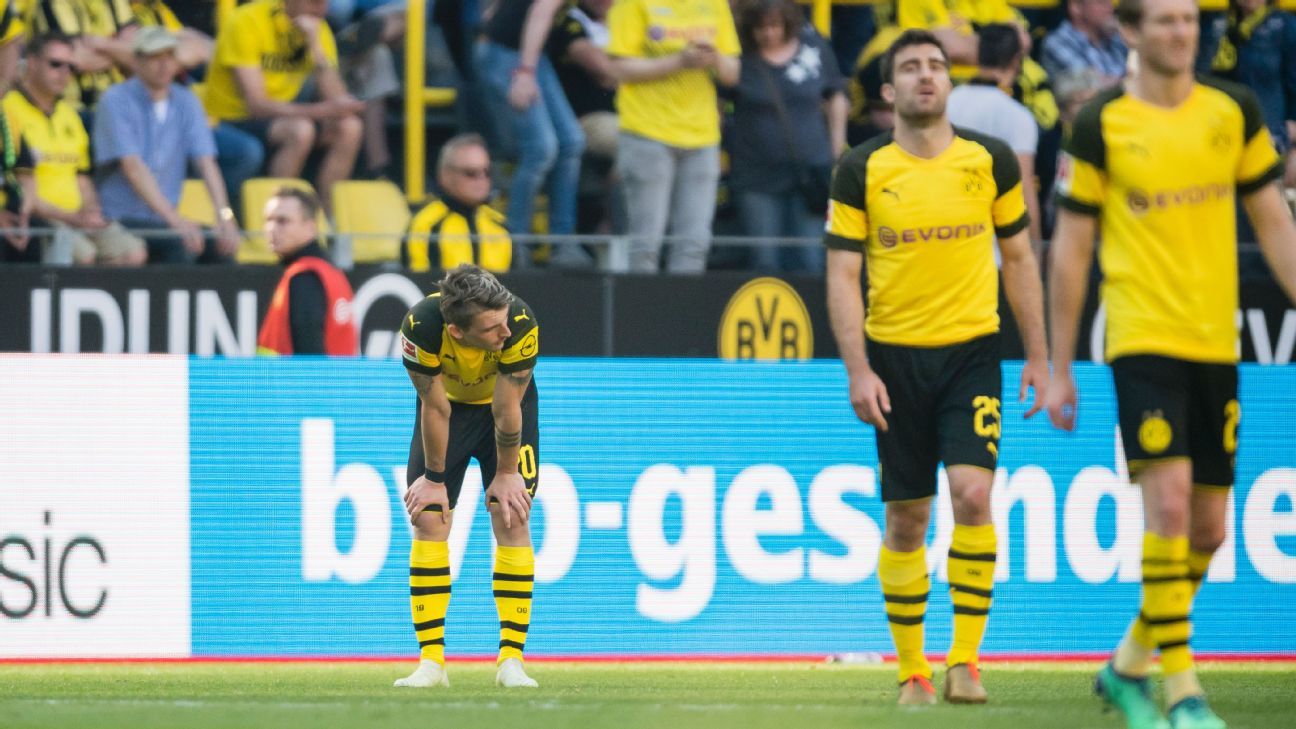 
DORTMUND, Germany — Borussia Dortmund could have sealed a top-four finish with a draw in their final home match against Mainz last weekend. Instead, a 2-1 defeat — surprising on the heels of two bright performances and unsurprising in the light of the entire campaign — means Peter Stoger’s team will have to hope nothing goes significantly wrong in their final match of the season against fourth-place Hoffenheim in order to seal a Champions League spot.

“Typical” was the word Stoger used in an interview with ARD to describe the abject performance against Mainz last Saturday, so close to the finish line. But in the same breath, the Austrian coach was also hopeful his men would bounce back again, as they had done often enough after poor results this season.

The 52-year-old faulted his players for not doing enough “uncomfortable work,” which might have been a fair criticism, Stoger also added to his team’s helplessness by failing to address the connections lacking in the centre of the field. Instead of trying to even the numbers in the middle of the park by bringing on another central midfielder, Stoger took off a central midfielder in Mario Gotze and and a winger in Christian Pulisic for two more wingers in Andre Schurrle and Andriy Yarmolenko. Hence, BVB’s passing matrix resembled the Dortmunder U — one of the city landmarks, still on top of the building of the former Unions brewery — with no penetration in the danger area.

And thus Stoger’s tenure at Dortmund will come to an end after the match in Hoffenheim, as the bosses can’t envision the necessary footballing development with him on the sideline. Instead, reports suggest they are hoping for Nice’s Lucien Favre to apply his style of one-touch football after the summer break.

The defeat to Mainz did not only encapsulate the team’s questionable mentality or their daunting issues to find footballing solutions but also the general awkwardness in the club. Retiring goalkeeper Roman Weidenfeller was celebrated for 16 years of loyal service at the club with the chants “We all are Dortmund boys,” while some fans kept the rest of the team from chiming in by loudly showing their disdain. Not exactly a reflection of a club that usually prides itself on unity, togetherness and an unbreakable bond between team and fans.

And the awkwardness continued the next day, when Dortmund midfielder Sebastian Rode, who had last featured in May before a series of injuries sidelined him for the rest of the season, casually revealed that a new coach will be on the horizon while talking about his own perspective on the club. “The plan is to be fit again for the summer preparation and then it’s about presenting myself to the new coach,” Rode said during a football talk show on Sky Germany. Oops. And the 27-year-old doubled down when asked if Stoger’s exit was likely. “That’s what we assume. The way he expresses himself in the locker room, we fully expect to have a new coach next season.”

With a sizable overhaul in the summer — which will always entail the risk that things might get worse before getting better — and the house being on fire on several floors, Stoger won’t cling too much to his current job but might actually feel relieved once the season is over.

The coach simply shrugged Rode’s comments off Thursday, saying, “A lot of people have commented on my future. Sebastian Rode is just one of many.” But for Stoger to put his gig at the Westfalenstadion down on the CV with a positive footnote, Champions League qualification has to be achieved.

Holding a three-point advantage over Hoffenheim and fifth-place Bayer Leverkusen, the Black and Yellows have the best outlook going into the final matchday. Due to a better goal difference of three over Julian Nagelsmann’s men, they can afford to lose by one goal.

However, should Hoffenheim manage to beat Dortmund by two goals or more, BVB’s fate will depend on their goal difference versus Bayer Leverkusen.

Leverkusen, who host Hannover, have to effectively make up seven goals even though their goal difference is just six goals worse. They have only scored 55 goals to Dortmund’s 63, and the total amount of goals scored is the third tiebreaker for league position after points and goal difference.

Can there be the perfect storm for a side nicknamed “Neverkusen” that are scoreless in three matches and are stripped off the best goal-scorer in Kevin Volland? Dortmund surely shouldn’t rely on the Leverkusen jinx as they face a side that has won six, drawn three and lost one of their past 10 games, scoring 26 goals in the same time frame.

Nagelsmann will have to make do without his best attacker in Serge Gnabry, who was on a hot streak with seven goals and three assists in his past nine games, but BVB can match that with their own jigsaw puzzle at the back.

Due to the suspension of Sokratis Papastathopoulos and the injury to Omer Toprak, winter signing Manuel Akanji is the only first-choice centre-back left. The 18-year-old Dan-Axel Zagadou has recovered just in time from a muscular injury, but the youngster has often looked shaky when playing at the heart of defence this season. Is a high-pressure match with nothing less but the club’s mid-term future on the line the right time for Stoger to put in a young, inexperienced centre-back? The Austrian took 23-year-old Patrick Mainka from Dortmund’s reserves on the trip to Hoffenheim, while naming the right-back another option to act as makeshift centre-back.

So Stoger will hope that the individual quality up front will make it happen for him, as he mused that Hoffenheim will have to “go with some risk, which will open spaces.” For the likes of Gotze and Shinji Kagawa, who is back from injury, this is not only the chance to secure the chance to hear the soothing sounds of the Champions League anthem but to leave a lasting impression to convince their respective national-team coaches they should be nominated for the World Cup squad.

There’s no shortage of motivation for Borussia Dortmund as a team and as individuals; the question is, will they be up to the final test?

Man City reserve goalkeeper Scott Carson relishing role as mentor to Zack Steffen but still hopes to play
I’m now ‘The Experienced One’
For Arteta and Arsenal, the honeymoon may be over
PSG must beat Leipzig; will Bayern and Liverpool stay perfect?
Atletico Madrid’s three-for-one offer for Antoine Griezmann rejected by Barcelona