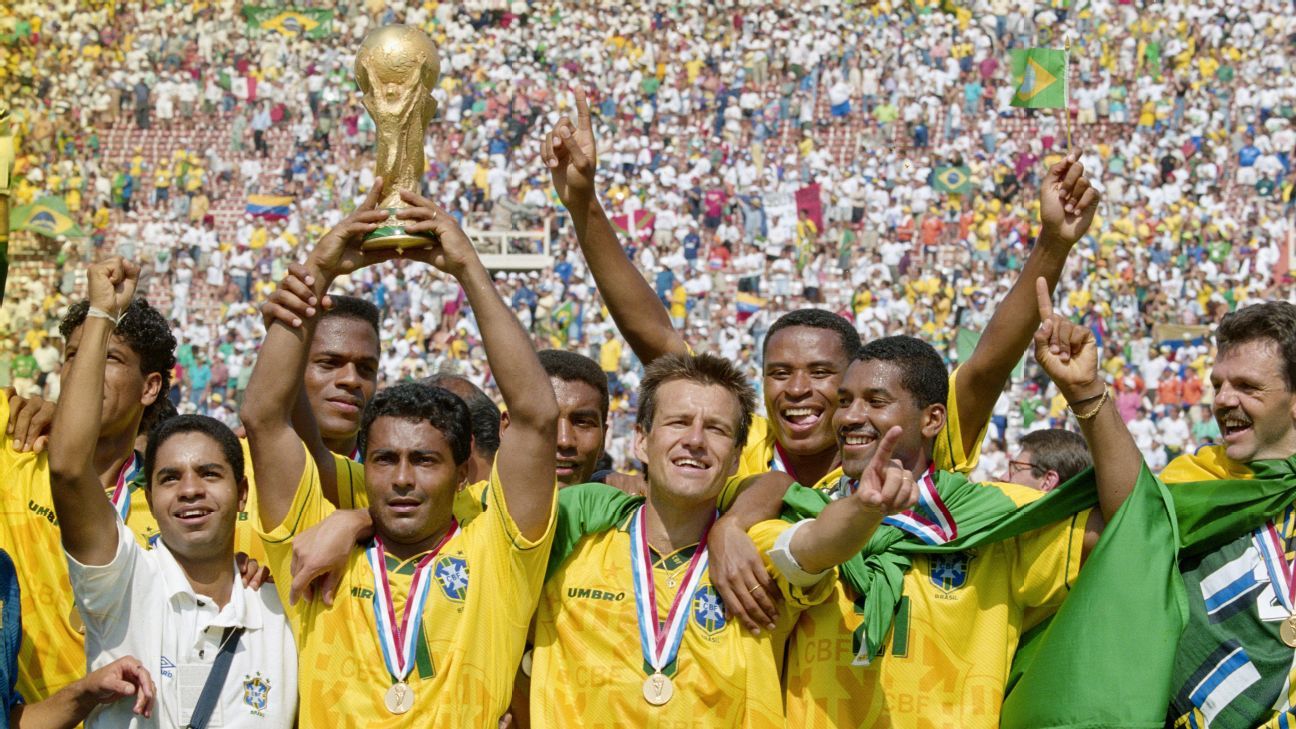 
A version of this article was first published on ESPN in 2006.

FIFA’s decision to choose the United States as hosts of the 1994 World Cup was greeted with scepticism elsewhere across the globe. But despite “soccer” being way down the American sporting popularity list at the time, the tournament saw full houses throughout and it is still the best attended of any finals.

After a Hollywood-style opening ceremony in which soul diva Diana Ross (rather prophetically) missed a penalty, Germany beat Bolivia in rather unconvincing fashion. That too was to prove prophetic.

Brazil, following two poor World Cup finals performances, looked the strongest they had since 1982, with Barcelona striker Romario at the very apex of his predatory powers.

Coach Carlos Alberto Parreira had added a defensive ballast to midfield in the tandem of Mauro Silva and Dunga. It paid dividends in easy opening wins over Russia and Cameroon. Brazil’s final group game then came against a strong and free-scoring Sweden side: honours were shared as both progressed.

Russia and Cameroon both exited prematurely but not without sharing a record-breaking match. Russia’s Oleg Salenko scored a five goals in a 6-1 win over Cameroon for whom Roger Milla became, at an official age of 42, the oldest ever scorer in the World Cup.

Argentina started in a similar fashion to Brazil, thrashing Greece 4-0 in Boston and then beating the impressive Nigeria 2-1.

While Gabriel Batistuta and Claudio Caniggia fired the bullets, the strings were pulled by Fernando Redondo and Diego Maradona, back playing after a ban for cocaine use and a series of false starts at Napoli, Sevilla and Newell’s Old Boys.

Looking suspiciously trim and energetic, Maradona lashed in an amazing goal against Greece and celebrated by screaming into a pitch-side camera, creating an iconic image of him at his maniacal best.

After they dispatched Nigeria, Argentina became favourites for the tournament. Until the news came out that Maradona had tested positive for banned stimulant ephedrine and had been sent home — he was later banned for 15 months.

Broken by the loss of their leader, Argentina faded against Bulgaria in their last group game and faced the considerable challenge of Romania in the second round.

The Romanians had won a group that included hosts USA and Colombia — Pele’s pick to win the tournament. But Colombia, for all their pretty passing moves, fell to the wiles of Gheorghe Hagi in their opener and then catastrophically lost 2-1 to the USA in their next, putting them out.

Harrowingly, defender Andres Escobar paid for an own-goal with his life, shot by gangsters on his return to Medellin. It was an unbelievable incident which cast a shadow over Colombian football for many years to come.

Jack Charlton’s Republic of Ireland continued to delight the neutrals by beating Italy in New York after a tremendous goal from Ray Houghton, but met a rather damp end to their campaign in the second round when a mistake by Italia ’90 hero Packie Bonner handed progress to the Dutch.

USA put up a brave showing against Brazil but lost to a late strike from Bebeto, Brazil’s other striker. Meanwhile, Germany struggled to get past the Belgians while Italy needed a late equaliser from Roberto Baggio against Nigeria.

Baggio, rumoured throughout the tournament to be at odds with coach Arrigo Sacchi, was the hero on the field as he converted an extra-time penalty winner.

The best game of the round of 16 saw Argentina face Romania. Hagi, often termed the “Maradona of the Carpathians,” showed the Argentinians what they were missing, supplying two goals for Ilie Dumitrescu before then scoring himself. Argentina played well but Maradona’s cutting edge was lacking and their defence were overrun by Romania’s incisive attacking.

Sweden though, matched Romania in the quarterfinal before holding their nerve in a penalty shootout and the other quarterfinals were all thrilling games.

Brazil fought off a late Dutch surge to win 3-2 through a Branco goal. Italy narrowly beat Spain with goals from Baggios Dino and Roberto. The “Divine Ponytail” struck his winner in the 88th minute and there was still time for an improbable miss from Julio Salinas.

The shock of the round came when Bulgaria, with only one recognised star in Hristo Stoichkov, staged a late comeback to knock out Germany. Stoichkov rattled in a free kick after Lothar Matthaus had put the Germans ahead from the spot. Then in dived the bald head of Yordan Letchkov to head home for an improbable winner.

Perhaps that Herculean effort was too much for Bulgaria as, in the semifinal, Roberto Baggio tore them apart. Stoichkov’s penalty to make it 2-1 made the game look far closer than it was.

Similarly, Sweden were outclassed in a dull semifinal with Brazil. A lone Romario strike was enough to take his team through.

After what had been a vastly entertaining tournament played in front of enthusiastic crowds, it was sad that the final was such a drab affair. It was worse than 1990’s showpiece slugfest between Argentina and West Germany — though; at least that game featured some controversy.

Both Romario and Baggio were playing despite injuries and their talents were dulled, with both missing good opportunities.

Though Brazil played the more attacking football, Italy defended well with Franco Baresi outstanding while defying a meniscus injury that looked to have killed his tournament against Norway in his team’s second group game.

Despite a thrilling cameo from Brazil substitute Viola, extra-time petered out and penalties would, for the first time, decide which side could win the World Cup for a record fourth time.

Baresi, exhausted, and Marcio Santos both missed and, after an exchange of two successful kicks, Daniele Massaro’s poor effort was saved by Claudio Taffarel.

After Dunga had given Brazil the advantage, up stepped Roberto Baggio, so deadly all tournament. He blazed over, choosing power over the precision that had served him so well. Brazil were again champions.