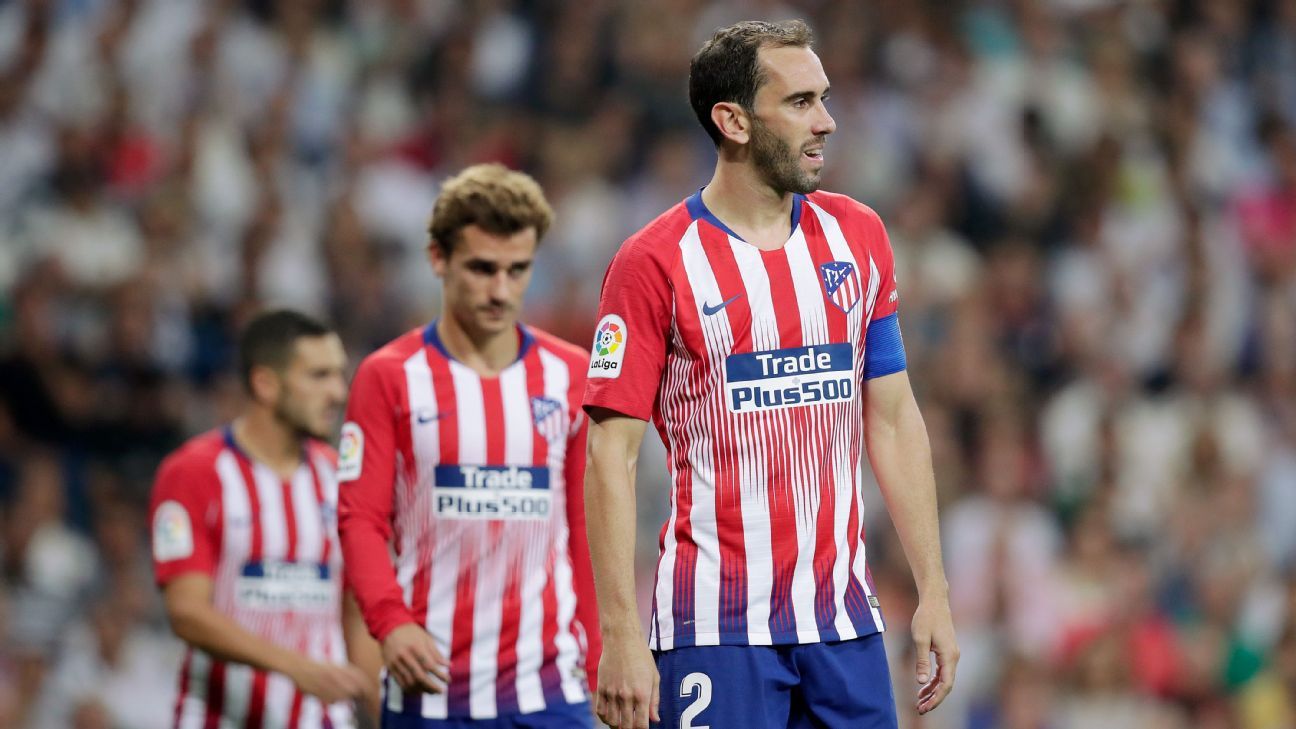 His Atletico side took a point from the European champions, stayed in touch at the top of the table and kept a clean sheet: his teams have now conceded a miserly three goals in their last six Liga visits to the Casa Blanca.

Yet the Argentinian left enemy territory with a major headache, one caused by a problem that might be one of the most surprising and troubling he could possibly have encountered.

The phenomenal Uruguayan is, in his own way, like Leo Messi. If you strive, week in week out, to find the right adjectives for his heroic, inspirational and buccaneering level of leadership without constantly repeating yourself, then very soon your lexicon will be exhausted.

Why there isn’t a statue to the man outside Atleti’s new stadium is completely beyond me. Perhaps the rest of La Liga objected in case the monument picked up a pair of boots, strode into Los Rojiblancos‘ squad and partnered the real-life Godin so that Simeone’s side literally never conceded another goal?

If you take away the matches Godin lost to Madrid either with Villarreal or before Simeone took over at Atleti, then this giant-hearted, ultra-competitive captain would have a winning record against Los Blancos overall. During the reign of Cristiano Ronaldo, three straight Champions League wins, Jose Mourinho’s vast budget for new players, two title wins for Madrid, Godin’s record would read: won 10, drawn nine, lost nine. Sensational.

His tenure as Simeone’s on-pitch facsimile has been a central building block of the most successful era in Atleti’s entire history. No small boast.

His eight trophies include La Liga, La Copa and two Europa Leagues. It even felt like divine intervention that it was him, the South American behemoth, who headed the goal at the Camp Nou that ended up clinching Los Colchoneros‘ first league title in two decades.

But above all those trophies was the intangible stuff. Fans, players, staff, media… everyone knew that if there was something wrong, if there was a threatening rival, if there was a brutal tackle that was essential, if the odds were against Atleti you could rely, with blind faith, on Diego Godin.

You can’t buy that feeling. You can buy the player who gradually infuses the club with that sensation of security, total commitment and ultra-reliability, but only a very small handful of elite sportsmen have it. When it emerges, it’s because of a special process of osmosis: a fusion of the right guy who possesses the “right” stuff at the right club at the right time. That’s so, so rare.

Who was it received the first phone call from Antoine Griezmann to say ‘I’m staying at Atleti’? Godin.

Who was it that Griezmann thanked for a major influence in shaping his character and attitudes sufficiently to help make him World Champion with France? Godin.

Who was it who lost three teeth in an all-or-nothing clash with Valencia keeper Neto, allowed dental surgeons to re-plant the two “living” teeth with roots, never bothered looking for the missing third one while joking that he hoped someone else had found it and sold it? Godin.

Boy, he’s special. But boy, he’s wildly off form. And this is Simeone’s headache.

Those of us who’ve been following Godin closely would bet huge sums of money that things will self-correct. He’s too young (not 33 until February and with the stated intention to play until he’s 40) for this to be a complete physical decline. He’s too stubborn to let exterior motives distract or debilitate him for long. And he’s too attached to the concept of winning the desperately coveted Champions League in Atleti’s own stadium next June for any club to tempt him away in mid-season.

This, after all, is also the man who turned Manchester City down in 2015 and United last August. Frankly he could, with either move, have quadrupled his salary. “When City wanted me it’s true that I wavered for a while but I weighed up the things which mattered more to me in life and, therefore, I stayed,” he admitted last season.

So, having read all this, it’s not hard for you to understand that my criticism of Godin’s form this season is both a rarity and constructive. But consider the evidence.

Against Valencia on the opening day, Godin completely misjudged Dani Wass’s cross and although Rodrigo had to produce marvels in order to chest it down and score, the error was on Godin. That night WhoScored.com released the stat that this was the first “direct error leading to an opposition goal” that the monumental Godin had committed for six years. Remarkable. But like those mythical London buses, you wait six years for one and then four come along in quick succession.

Against Celta, Godin inexplicably went all Bambi-legged as he’s attacked by Maxi Gomez. After gingerly picking himself up off the pitch, bewildered and embarrassed, his countryman scores with ease. A glaring error directly leading to a goal. Again.

Worst of all, with his team playing in a personality vacuum against Eibar at home and tied at 0-0 — oh, and the Basque club had never won a league game against Atleti in Spain’s capital — Godin wandered out of defence with three minutes left, ball at his feet, and seemed puzzled. “What was I intending to do here?” Godin got startled and gifted the ball straight to Gonzalo Escalante. Roughly 20 seconds and five passes later, Sergi Enrich would score for Eibar as Godin, again, looked feeble within a metre or so of the Atleti’s goal-line. From the unbelievable to the unthinkable.

Across the next two league games, the problem seemed to evaporate but against Madrid, Godin tired as the ferocious battle wore on. He made two glaring errors and Madrid began to actually regard him as the weak link in Atleti’s rearguard action. They pressed and harassed him. It was unheard of, predators sensing that the pack’s alpha-male might be vulnerable for the first time.

Godin’s most heinous moment on Saturday was reminiscent of that aberration against Celta. Despite facing no real threat, Godin was occupying a pitch-position that can’t tolerate even a hint of an error.

With nobody between him and Jan Oblak in the Atleti goal, the infantile error he commits with 20 minutes left would have had the “old” Godin roaring in primeval fury. Atleti’s captain passed the ball straight to Marco Asensio and gifted Los Blancos one of their most important goal chances of the entire game. With a ribbon on it.

Karim Benzema reacted to the giveaway and hared upfield in support, unmarked. Spoiler alert again: Jose Gimenez, who produced probably his most complete and most impressive 90 minutes for Atleti, evidently believes that his captain is no longer to be blindly trusted. Embarrassingly for Godin, his teammate almost intuits that his defensive partner is about to gift the ball away and is instantly on the chase; ultimately, Gimenez makes a diving block in the penalty area to prevent the ball finding the wide-open Benzema.

And that’s where this tale ends.

It’s clear that Godin is enduring his worst form since 2012. Gimenez is “on the case” and one would still wager heavily that Atleti’s captain finds a way to sort this apparently psychological gremlin out. For the time being, however, Simeone not being able to fully rely on his towering, inspirational, all-or-nothing captain is one big headache for the Atletico coach.