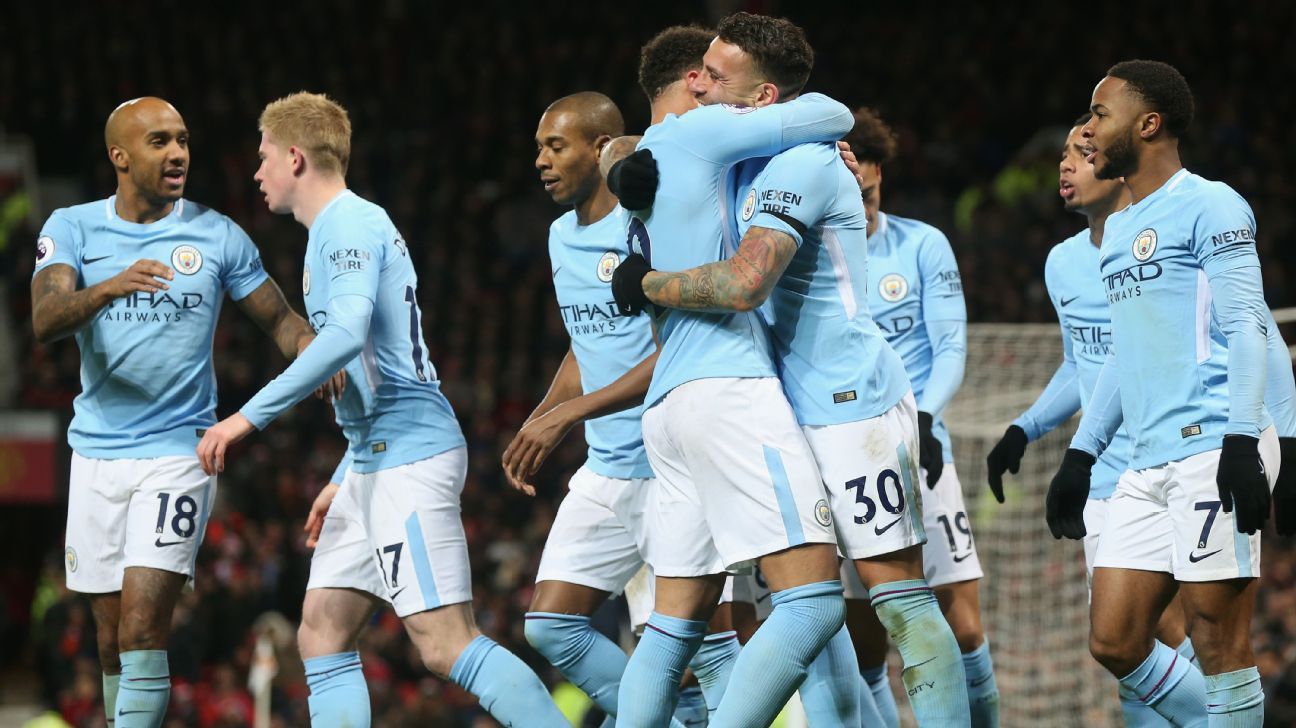 
MANCHESTER, England — It was at Manchester United that Arsenal’s “Invincibles” came closest to suffering the defeat that would have denied them a place in history.

Early in the 2003-04 season and long before anybody was even suggesting Arsene Wenger’s team could go through the season unbeaten, a 0-0 draw became infamous for what happened at the end of the 90 minutes, with both sets of players clashing in the so-called “Battle of Old Trafford” following Ruud van Nistelrooy’s missed penalty in the 90th minute.

Had the United striker scored, Arsenal would have lost and the gold Premier League trophy that sits proudly in the boardroom at the Emirates Stadium would never have been made.

Perhaps Manchester City will go on to emulate those achievements this season, but we are still waiting for their unbeaten run to be tested as Arsenal’s was 14 years ago. This derby was supposed to be the acid test of their credentials, the game that would threaten them more than any other.

But while Arsenal rode their luck to emerge with a draw all those years ago, City cruised to a 2-1 victory against their neighbours and United never looked like claiming the victory that they and the rest of the Premier League needed to keep the title race alive.

Pep Guardiola’s men are 11 points clear and it is not even Christmas; the title race is over, with everyone else fighting for second place. The only question is whether City can go through the season without suffering a Premier League defeat.

Back in 2003-04, United pushed Arsenal to the limit, as the fight and passion that the rivalry between the two clubs had stored up unloaded on the pitch in a pulsating game. On Sunday, there was little of the same on display from the home side.

But whether that was down to the shortcomings of Jose Mourinho’s men, who they badly missed the suspended Paul Pogba, or the endless passing and dominance of Guardiola’s team is a point to be debated; City are so good that they are making even the strongest opponents appear to be limited underdogs.

Liverpool have already been brushed aside at the Etihad, Chelsea defeated at Stamford Bridge, Arsenal beaten at home and now United have fallen. Though Tottenham visit next Saturday, their form has been so unpredictable lately that it is difficult see Mauricio Pochettino’s team getting the win that will preserve Arsenal’s record.

Everton are the only team to have taken a point off City this season and that was perhaps largely down to Kyle Walker’s first-half dismissal. With 11 men on the pitch, the league leaders have proven to be unbeatable, formidably squeezing the hope out of opponents.

Against United, it appeared at times as though the away side had 14 players, such were the options available to a blue shirt when in possession. David Silva, Kevin De Bruyne, Leroy Sane and the hugely underrated Fernandinho took it in turns to torment United with the ball.

And a further sign of their prowess is that Mourinho does not have a bad side. The Old Trafford club might have endured tough times since Sir Alex Ferguson retired in 2013, but they are much stronger than last season and sit three points clear of Chelsea in second place. Had Pogba been available, it might have been a different story.

This latest win saw City equal Arsenal’s record of 14 successive Premier League victories and only the most optimistic Swansea supporter would back Paul Clement’s team to stop them making it 15 at the Liberty Stadium on Wednesday.

It is true that City have more than half a season to play and the Champions League and domestic cups may prove a distraction if they progress to the latter stages on all fronts, but their top-six rivals also face a similar drain on their resources.

Complacency may become their biggest enemy, with a lack of focus giving somebody the chance to spring a surprise. But if their closest rivals United can’t beat them, who can, or who will? And when? There are only a handful of fixtures remaining that threaten to derail the Guardiola bandwagon.

They must still play Spurs, who defeated Real Madrid last month, at home and away, while a trip to Anfield next month could be tricky, especially if Liverpool’s “Fab Four” of Philippe Coutinho, Roberto Firmino, Mohamed Salah and Sadio Mane are on form. But can Jurgen Klopp’s team stop City scoring?

Arsenal will be desperate to win at the Emirates in February, if only to safeguard their standing as the only club to go through a season unbeaten, but United’s 3-1 destruction of the Gunners last week suggests Guardiola’s team will pick them off in similar fashion. Chelsea visit in March, possibly amid Champions League ties for both clubs, while the trip to Everton on March 31 could also prove awkward.

But perhaps the quest for history will boil down to the first two weeks of April, which see the Manchester derby and a clash with Tottenham at Wembley. If City are still unbeaten after those two games, we may well be looking at “Invincibles: The Sequel.”