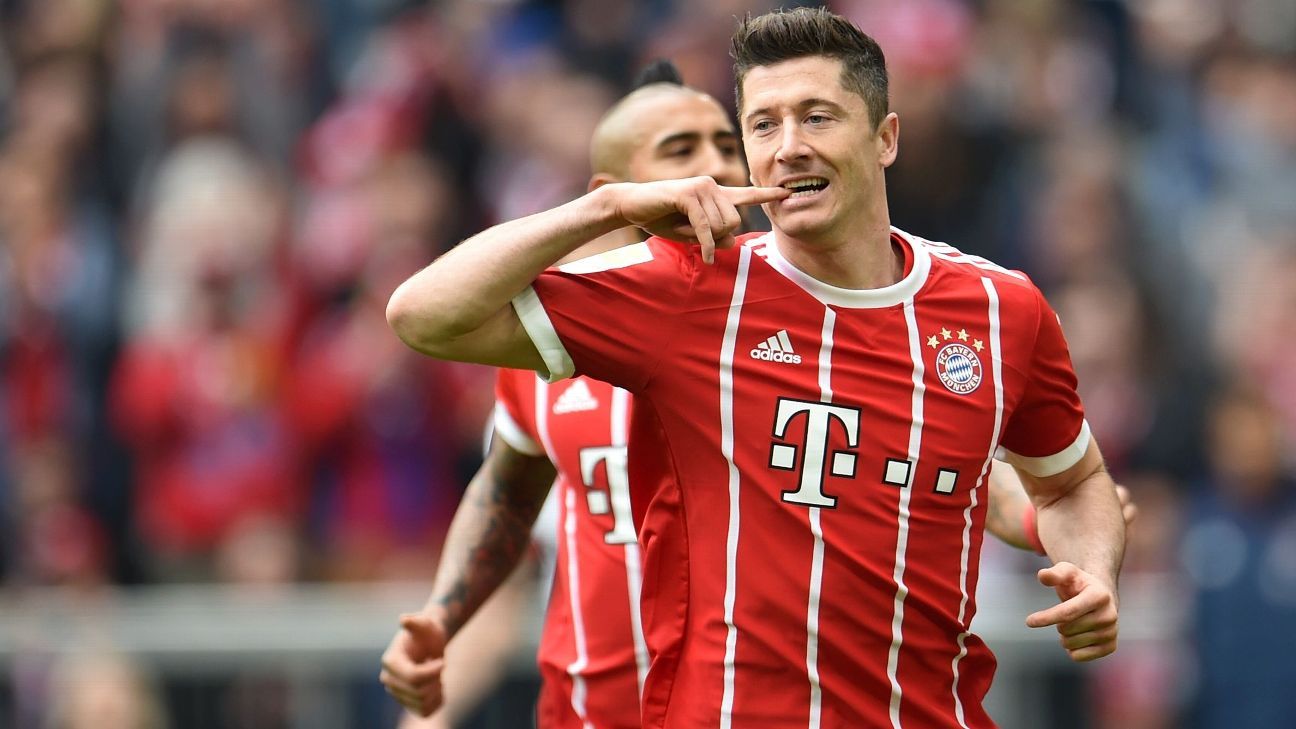 
Champions-in-waiting Bayern Munich devoured hapless Hamburg on Saturday courtesy of Robert Lewandowski’s hat trick, two goals from Franck Ribery and Arjen Robben also getting on the scoresheet in a 6-0 stroll at the Allianz Arena.

Extending their lead at the top to 20 points with only eight games remaining, Bayern’s sixth consecutive Bundesliga title could be sealed as early as next weekend with a win in Leipzig — if other results go their way. Incidentally, Bayern have won their last nine games against fallen giants HSV by the small margin of 51-3.

Record signing Corentin Tolisso could have suffered a season-ending shin injury after coming as a second half substitute.

8 — Jupp Heynckes continued his masterful fourth spell in charge with another relentless success, while the “will he or won’t he” stay saga continues in earnest.

GK Sven Ulreich, 7 — Hardly tested in reaching double figures for clean sheets this season, spending most of the second half in Manuel Neuer mode about 40 yards from his own penalty area, perhaps pondering if he will make the Germany World Cup squad.

DF David Alaba, 7 — A team best 111 touches of the ball for the Austrian, who went close with a couple of trademark left-footed free kicks. He is sure to be tested more against Besiktas in the Champions League in midweek.

DF Mats Hummels, 7 — Enjoyed a leisurely stroll in the park, but should have scored in the second half, missing an open goal after Thomas Muller’s trickery down the right flank.

DF Jerome Boateng, 7 — Like Alaba, totally reinvigorated by the return of Heynckes to the sidelines, remaining unbeaten this season in the Bundesliga (16 starts). Coasted serenely through the game against his former employers.

DF Joshua Kimmich, 7 — Buoyed by signing a contract extension on Friday, he fed Lewandowski with a typically inch-perfect cross for Bayern’s second goal.

MF Javi Martinez, 7 — The epitome of steadiness and consistency, Martinez will always be one of the first names on Heynckes’ teamsheet.

MF Arturo Vidal, 6 — Booked early and with Heynckes not known for taking risks with red cards, it was absolutely no surprise that the combative Chilean was taken off at the break.

MF Arjen Robben, 7 — With just a few months left on his deal, he produced a trademark left footed finish for Bayern’s fourth, but overall somewhat overshadowed by his veteran wing partner Ribery.

MF Franck Ribery, 8 — Bayern’s longest serving player sat out last weekend’s Freiburg trip with a stomach bug, but fired his side into the lead after only eight minutes. He skipped past the last defender before easily rounding the keeper to tap into an empty net to set Bayern on their way to the joy of six. He celebrated the goal by running half the length of the Allianz Arena in order to feel the love with his jubilant son in the stands. Staking his claim for a new contract, he grabbed his second with 10 minutes to go, curling a right-footer past a sprawling Christian Mathenia in the Hamburg goal. With rising star Coman potentially out for the season, Ribery needs to bring his best to the European stage too, but hasn’t scored in the Champions League in almost three years.

MF Thomas Muller, 6 — A quiet game by his standards but Bayern still won 6-0, which says it all about the ineptitude of demoralised HSV.

FW Robert Lewandowski, 9 — Given a breather in Freiburg, but refreshed in all his glory to seal an almost inevitable hat trick. He planted a header into the net from a cute Kimmich cross for his opener on 11 minutes, before finishing coolly after exchanging passes with Alaba seven minutes later. He showed some sympathy for doomed Hamburg by blazing a penalty over the bar on 86 minutes, but didn’t the repeat the same mistake with the final kick of the game, bringing up a century of Bundesliga goals for Bayern in only 120 appearances. Not bad for a free transfer from former rivals Borussia Dortmund.

MF Corentin Tolisso, 6 — Replaced Vidal at the break, but had to go off with a shin injury only 20 minutes later. Left the pitch in tears, escorted by two medics, Bayern’s record signing could be out of for rest of season if his body language is any indication of the severity of the injury.

MF Thiago Alcantara, 7 — Replaced Robben just after the hour mark, putting in a classy performance, winning the penalty which Lewandowski squandered. Will more than likely start in Turkey in midweek in a tougher test for the German champions.

MF Sebastian Rudy, 6 — Came on for the crocked Tolisso and flashed a drive past the post. If the statistics are correct, he was the only Bayern to commit a foul all afternoon. What a sinner.