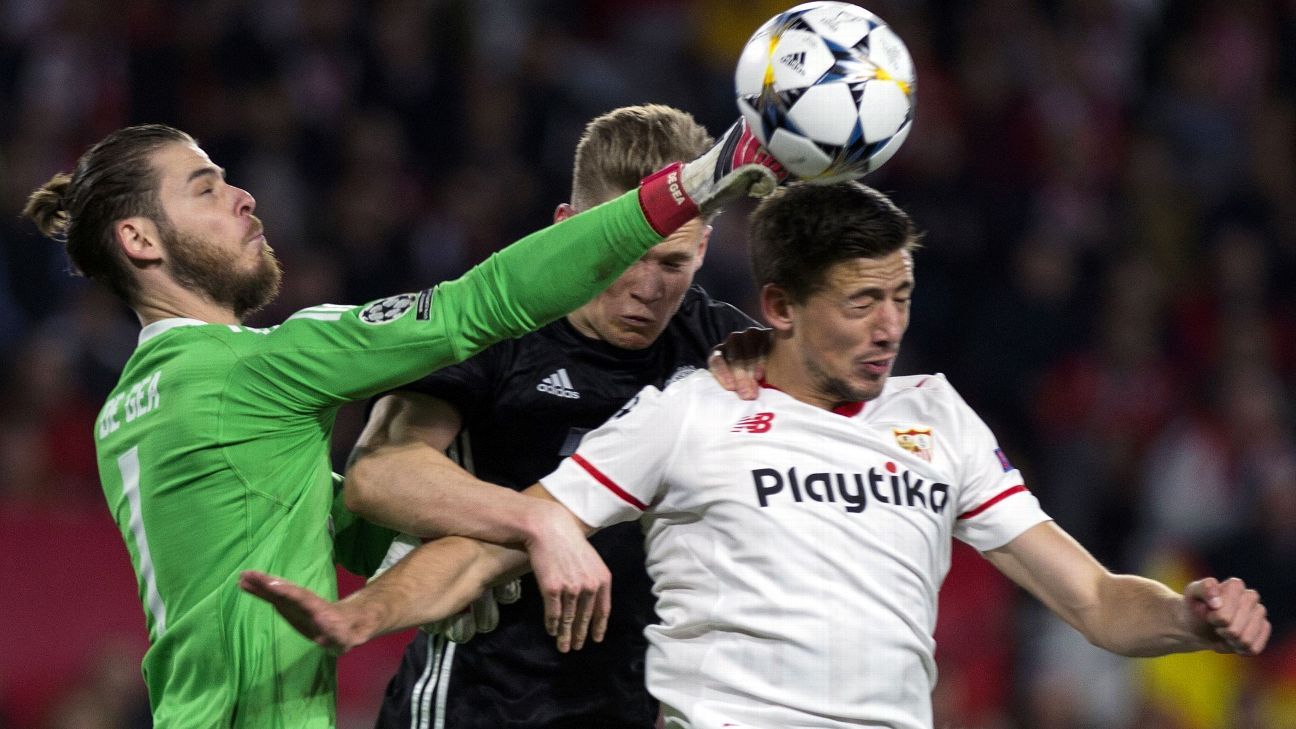 
Manchester United came away from Sevilla with a goalless draw in the Champions League on Wednesday, which was probably mission accomplished as far as Jose Mourinho was concerned. The game was an inspiring spectacle for the most part, illuminated by a magnificent first half from David De Gea.

De Gea was majestic, and United’s draw makes them slight favourites to progress.

United’s football was ponderous for very long periods, with their intention clearly to claim a draw, and their attack failed to get going as a result.

7 — Jose Mourinho seemingly got precisely the result he was looking for, and for that he deserves some credit. This game, however, will not grace many end-of-season DVDs.

GK David De Gea, 9 — Made several superb saves, one of which — at the very end of the first half — was astonishing. Played himself out of danger with his feet more coolly than most defenders could. Outstanding.

DF Chris Smalling, 5 — Positioning was worryingly awry in the first half, though that improved in the second. Tackling was good but too often reactive.

DF Antonio Valencia, 6 — Like Young, got high up the pitch but showed too little subtlety against his opposite man.

MF Nemanja Matic, 6 — Defensively disciplined throughout but his distribution was subpar whenever he tried to play a much more expansive game.

MF Scott McTominay, 6 — Played a conservative game, taking very few risks — one good effort on goal and one misplaced pass aside, did not alter the flow of the game too much.

MF Ander Herrera, 6 — Tenacious as ever, until withdrawn early.

MF Juan Mata, 6 — Combative in the tackle, and worked hard but to little effect in attack.

MF Alexis Sanchez, 6 — Toiled out wide with little supply, and cut a frustrated figure at times.

FW Romelu Lukaku, 6 — Spent much of the game chasing high balls. Had very little service but missed a very presentable chance in the first half, a volley he should at least have got on target.

MF Paul Pogba, 6 — Could not rise above the general torpor of the game. Kept the ball fairly well but created little.

MF Marcus Rashford, NA — Stretched the play well with some good runs from the moment of his introduction.

MF Anthony Martial, NA — Did not have much possession in the final third but got the ball out of defence well.