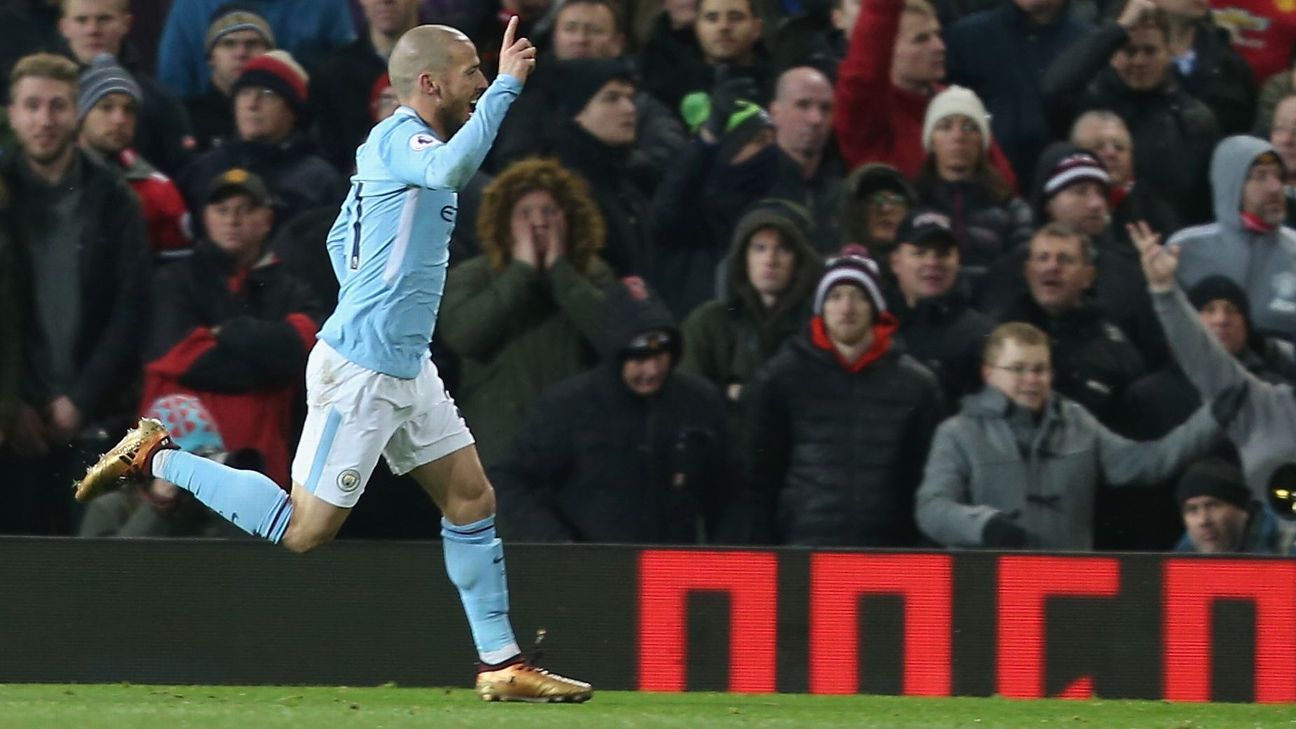 
David Silva has told ESPN FC that Manchester City may now have the “upper hand” on Manchester United ahead of Sunday’s derby clash, and that his team’s 6-1 victory at Old Trafford in 2011 changed the face of the rivalry between the two clubs.

City and United meet for the 177th time in all competitions at the Etihad Stadium on Sunday and, although Jose Mourinho’s United won the last encounter with a dramatic 3-2 away win in April, Pep Guardiola’s men are Premier League champions and sit top of the table, nine points clear of their neighbours.

City have also finished ahead of United in the league in every season since Sir Alex Ferguson retired in May 2013 and Silva said that is evidence enough of the changing of the guard in Manchester since the 6-1 win.

“If you are telling me that statistic, it is a good statistic that we haven’t finished below United since he [Ferguson] left, so maybe that is good evidence,” Silva said. “The derby has changed since my time here. A key turning point was the 6-1 at their place — I think things have changed since then.

“When they come to play us here or anywhere, they probably have higher respect for us than before.

“The respect is always there, no matter who you are playing, but maybe now, the way in which City are viewed by United has changed and maybe we have got the upper hand.”

Silva, speaking to ESPN FC in his role as an ambassador for the resort of Anfi in his native Gran Canaria, has played a central role in City’s rise to become Manchester’s top team since arriving from Valencia eight years ago.

And although the 1-0 victory over United at the Etihad in April 2012, when Vincent Kompany’s goal won the game, proved decisive in the club’s title success that season, Silva points to that 6-1 win as the most important derby of his time at City.

“Vinny’s goal was really important,” Silva said. “That game was key in that we went on to win the title. But the 6-1, for the fact that it was at Old Trafford, too, was probably even more important. That was one of those games that goes down in history.”

Despite United’s recent decline — they haven’t won the title since 2013 — Silva insists it is still a big game and one that rivals the Clasico between Barcelona and Real Madrid in terms of importance.

“I can’t make a direct comparison because I have never played for Barca or Real, so haven’t played in a Clasico,” Silva said. “But there is a huge impact from this game, whether you do badly or well, whatever the result of the derby, it has a massive impact.

“United are a little bit off pace maybe, but they have always had a great side and they still have a great team now and I’m sure that, come the end of the season, they won’t be too far away.

City go into the game at the weekend with the spotlight fixed on England winger Raheem Sterling following his involvement in the incorrect awarding of a penalty during Wednesday’s 6-0 Champions League win against Shakhtar Donetsk.

Referee Viktor Kassai pointed to the spot, despite Sterling clearly tripping himself by kicking the ground.

Sterling has since apologised, but Silva said that the decision should rest with the officials, insisting that City have been on the end of bad calls too.

“You have to let the referee make the decision,” he said. “They get it wrong sometimes.

“In this case, he has blown for a penalty that wasn’t a penalty, but there are plenty of times that they miss penalties that are cast-iron.

“Stuff happens in football. Sometimes it goes in your favour, sometimes it doesn’t.

“The goal that was incorrectly disallowed for offside [by Leroy Sane] in the Champions League against Liverpool last season — Liverpool didn’t put their hands up and say, ‘hold on, that wasn’t offside, there you go.'”