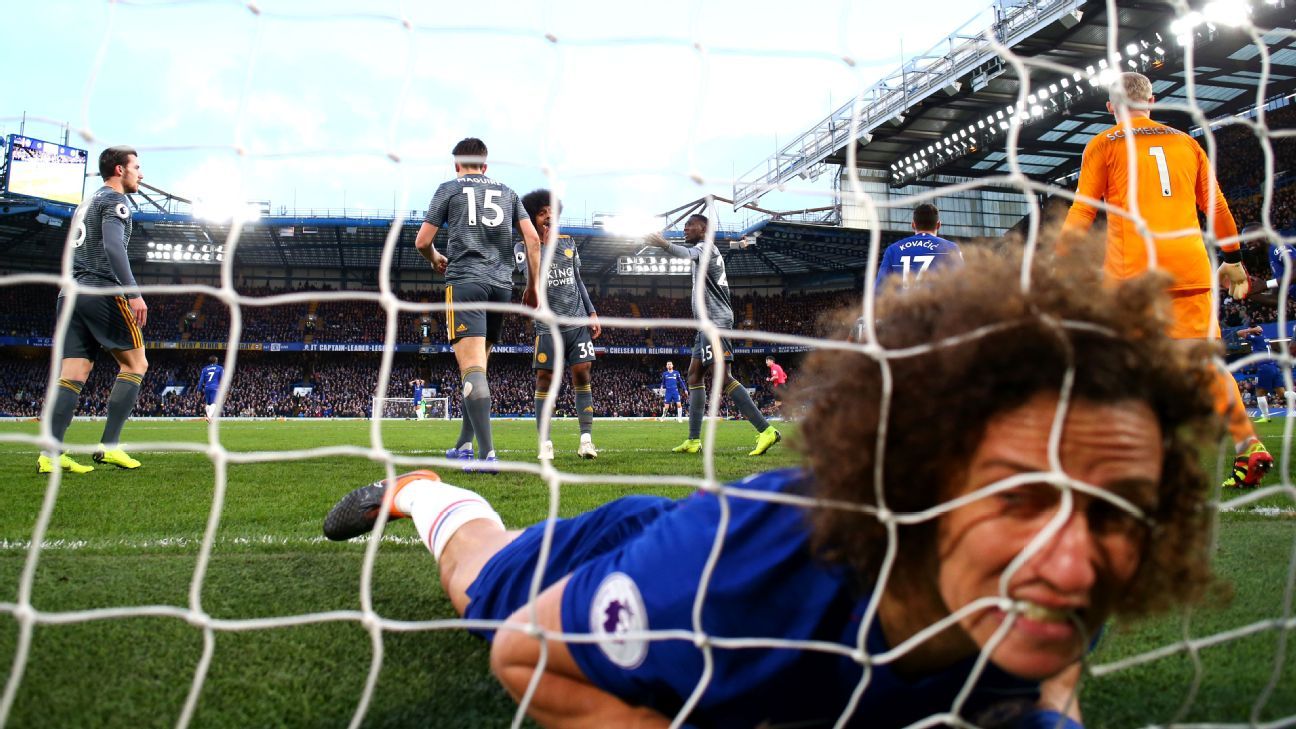 Jamie Vardy was the hero as Leicester City ended a four-game winless run in all competitions to hand Maurizio Sarri his first home defeat as Chelsea head coach, dealing a blow to their Premier League top four hopes.

Chelsea did not drop their intensity or abandon Sarri’s “idea of football” even when chasing this game, and it took a combination of some unfriendly bounces off the goal frame and some inspired goalkeeping from Kasper Schmeichel to see Leicester escape from Stamford Bridge with three points.

The home side struggled mightily for long spells to break down Leicester with Hazard operating as a false No. 9, with a starting midfield completely lacking in goal threat not helping their cause. There also remains a sense that this Chelsea side will always give you one good chance, and Vardy took it.

6 — Sarri’s persistence with Hazard as a false No. 9 didn’t really work here, with the Belgian forced to drift far out of the penalty area to touch the ball. That said, Olivier Giroud fared little better when he came on, and Chelsea still missed a couple of golden opportunities to avoid this loss. There are also enduring questions of the solidity of this system against teams that counter with speed and precision.

GK Kepa Arrizabalaga, 7 — Typically understated as Chelsea dominated possession and territory, but made arguably the best save of his Blues career to date when he flew to his left to tip a curling Wilfred Ndidi long shot over the bar. Could do nothing to keep out Vardy’s clinical finish.

DF Cesar Azpilicueta, 5 — Could not deal with Ben Chilwell’s overlapping runs on his flank, as Vardy and James Maddison took turns to drift over to the right of Chelsea’s back four. Was the closest defender to Leicester’s striker when he scored, but in truth it shouldn’t have been his responsibility.

DF Antonio Rudiger, 5 — Switched play nicely to the flanks a couple of times but this wasn’t his best defensive game. Leicester used his trademark aggression against him to win free kicks, and he was bypassed far too easily by Maddison’s pass through for Vardy to score.

DF David Luiz, 6 — Chelsea’s most creative player early on, almost playing Willian and N’Golo Kante clean through with defence-splitting passes. Was also inches away from nodding in a Pedro flick at the back post. Generally defended well, but wasn’t in a position to recover to Vardy at the crucial moment.

DF Marcos Alonso, 5 — Playing with a false No. 9 pretty much nullifies his crossing ability, though in truth he hasn’t been much of an offensive contributor for Chelsea in recent weeks. Missed a golden opportunity to remedy that in the final minutes, clipping the inside of the post when clean through.

MF Mateo Kovacic, 6 — Neat and tidy on the ball as always but contributed nothing to Chelsea’s chance creation and his one attempt at goal was blazed over the bar from 25 yards. It was no surprise when Sarri’s response to going behind was to replace him with Ruben Loftus-Cheek.

MF Jorginho, 6 — Passed well under pressure and made both Vardy and Maddison do plenty of fruitless running. Also tested Schmeichel with one fierce shot in the first half, but his more penetrating passes were lacking. Cesc Fabregas was the logical choice to come on for him with Chelsea chasing.

MF N’Golo Kante, 6 — Recovered to stifle a number of Leicester counters before they had the chance to get going, and drove forward well in the build-up to Willian’s first-half chance. This wasn’t really a game for him though, with the visitors defending so deep and demanding a moment of Chelsea magic.

FW Willian, 5 — Provided a tame finish to Chelsea’s most promising counter when he shot low straight into the arms of Schmeichel. His corner deliveries were inconsistent, but even his more dangerous ones were dealt with by the excellent Harry Maguire and Wes Morgan.

FW Eden Hazard, 6 — Touched the ball a lot as a false No. 9, though not very often in dangerous areas. Still came closer to scoring than anyone else in a Chelsea shirt, crashing one shot off the bar and forcing a superb save from Schmeichel. He wasn’t quite brilliant, however, and this Chelsea need him to be.

FW Pedro Rodriguez, 5 — Leicester’s disciplined defending ensured he wasn’t able to find the ball in positions to trouble Schmeichel, and his misguided attempt at a nutmeg on the halfway line directly led to the move that yielded Vardy’s goal.

FW Olivier Giroud, 6 — Brought on to give Chelsea’s attack a focal point, he was well shackled by Maguire and Morgan and never tested Schmeichel.

MF Ruben Loftus-Cheek, 6 — This was a step back from the promising displays of recent weeks, with bad decisions in poor areas infuriating Sarri and helping to stymy Chelsea’s attempts to build momentum.

MF Cesc Fabregas, N/A — Sarri looked to him to find the defence-breaking pass that Jorginho could not, but Leicester’s defending was simply too good.