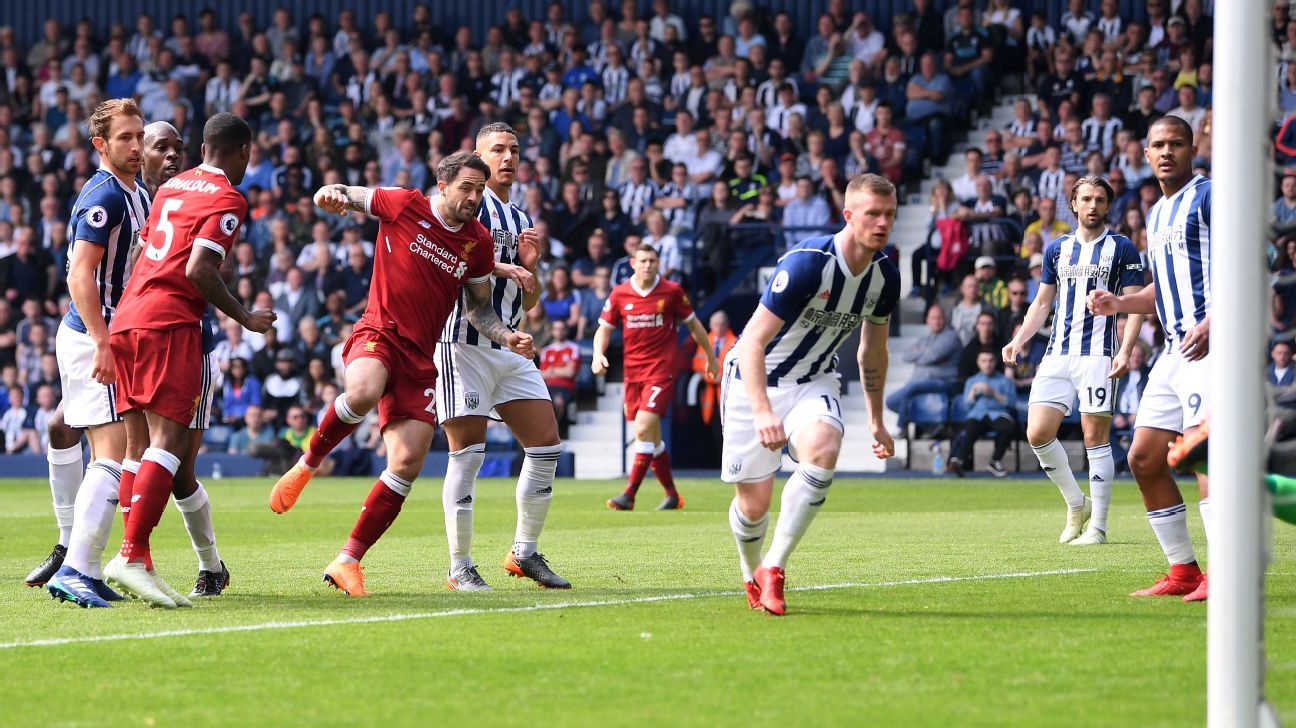 
Liverpool seemed to have next week’s Champions League semi-final on their minds as they threw away a two-goal lead at the Hawthorns in what was generally a lacklustre display against the league’s bottom club. The Reds have now failed to beat West Brom in three meetings this season but there was no excuse for letting this one slip away.

It’s been a long road back from various injuries for Danny Ings and it was a sweet moment for him when he opened the scoring just minutes into the game. His last goal was so long ago that Brendan Rodgers was still Liverpool manager!

The Reds were just far too casual for most of the game. Granted, the dry pitch was not exactly conducive to their slick, quick passing style, but at times this game had the feel of a preseason friendly. West Brom had threatened from set pieces in the first half so the warning signs had been there, but Liverpool continued to give away needless set plays and it cost them when they conceded from a corner and then a free kick.

6 —Jurgen Klopp made more changes than expected and while that wasn’t the only reason for the lacklustre performance it probably didn’t help. The inclusion of Ings paid off but changing three of the back four was a risk that backfired. Withdrawing Mohamed Salah for the closing stages proved costly too as it allowed West Brom to throw men forward without the worry of being caught on the counter.

GK Loris Karius, 6 — A mixed bag from the German. He flapped at a couple of first-half corners but redeemed himself in the second half by twice coming off his line quickly to snuff out danger. Somewhat unlucky on West Brom’s first goal when he made a good save only for Jake Livermore to pounce on the rebound, and had no chance with Salomon Rondon’s equaliser.

DF Joe Gomez, 6 — Very good until the closing stages when for whatever reason mistakes began to creep in. Perhaps it was fatigue due to having been out injured for a month, but the composure he’d shown for much of the game disappeared and it proved costly as his poor clearance and then subsequent foul led to the West Brom equaliser.

DF Virgil van Dijk, 7 — Good performance for the most part but could have done better with West Brom’s first goal when he was slow getting out and played everyone onside.

DF Ragnar Klavan, 6 — Steady and solid aside from one moment when he was caught out by the slowness of the pitch as he tried to let a long ball bounce through to Karius. Rondon nearly stole in, but the keeper did well to clear the danger.

DF Alberto Moreno, 4 — The Spaniard has been out of the side for some time and frankly it showed. He started poorly and never improved. Made no impression going forward and was repeatedly beaten by Matt Phillips, who seemed to be able to go past him at will.

MF Jordan Henderson, 5 — Quiet game from the skipper who was not involved to the extent he usually would be. Busy enough and not exactly poor as such, but just never really stamped his authority on the game.

MF Georginio Wijnaldum, 6 — The Dutchman got through a lot of good work defensively and covered a lot of ground. Neat and tidy on the ball and made some good runs forward but his impact was fairly minimal overall.

MF James Milner, 6 — Started brightly and was involved in most of Liverpool’s good passages of play. His delivery from out wide was particularly impressive. Less influential in the second half but did find himself in some dangerous situations in the penalty area that he couldn’t capitalise on.

FW Mohamed Salah, 7 — Scored his 41st goal of the season with a typically composed finish but overall it wasn’t a vintage display from the Egyptian who came in for some rough treatment at times from the Albion defenders.

FW Danny Ings, 7 — Opened the scoring with his first goal in 930 days and his joy was there for all to see. Almost added another just before half-time but was thwarted by a great Ben Foster save. Should have had a penalty when he was tripped by Craig Dawson. Replaced on 66 minutes.

FW Sadio Mane, 7 — Started the game very brightly and produced a bit of magic to create the opener for Ings. Lively enough for the rest of the first half but his influence began to wane after the break and like Ings he was withdrawn on 67 minutes.

MF Alex Oxlade-Chamberlain, 7 — Very lively cameo, with the highlight being a brilliant run and through ball to create the goal for Salah.

FW Roberto Firmino, 6 — Spent much of his time after coming on defending rather than attacking as Liverpool lost their way and found themselves under unnecessary pressure.

DF Dejan Lovren, NR — Sent on for the final six minutes to help repel the late aerial onslaught but never got to grips with the powerful Rondon and played everyone onside for the equaliser.