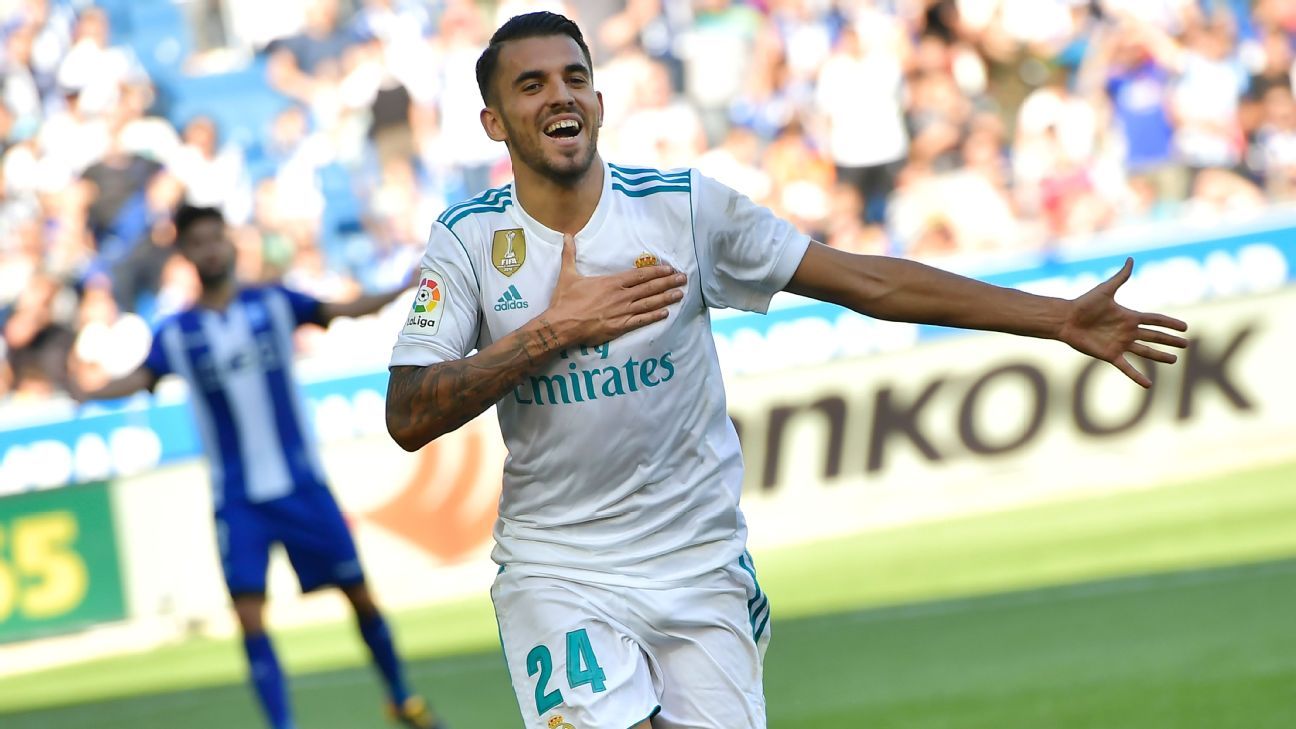 
Real Madrid had Dani Ceballos to thank for eking out a 2-1 victory against a fired-up Alaves in Mendizorrotza, the midfielder finding the accuracy lacking in his teammates to score twice in a 2-1 victory.

Alaves replied through Manu Garcia’s thundering 40th-minute header, with Ceballos netting what proved to be the winner before the break.

As has been the case this season, Real created plenty of chances but were met with another outstanding goalkeeping performance, this time from former Castilla keeper Fernando Pacheco.

Zinedine Zidane’s side mustered 21 shots in all, with Cristiano Ronaldo hitting the woodwork twice in a possession-dominant display. With a little more luck and fewer Fernando Pacheco heroics, the visitors could have had four or five.

Alaves had failed to score at all this season before Saturday and were denied greater reward for their industry by Keylor Navas and the sticks surrounding him, which intervened twice to deny Alfonso Pedraza.

Zidane’s defence continues to struggle under aerial assault and should have been punished for their profligacy at the other end; only seven of those 21 attempts were on target.

7 — Zidane’s selection policy continues to confound and in the absence of Toni Kroos, leaving Luka Modric on the bench was a gamble. However, Zidane deserves credit for his faith in his squad and reaped his reward by handing Ceballos a first start of the season.

Player ratings (1-10, with 10 the best. Players introduced after 70 minutes get no rating)

GK Keylor Navas, 7 — Alert to an in-swinging corner early on, Navas couldn’t do anything about Garcia’s bullet header off the underside of the bar. Did just enough to put off Pedraza, whose final touch was a little heavy, to spare his defence’s blushes late on.

DF Dani Carvajal, 5 — In another questionable decision by Zidane, Carvajal was dragged through another 90 minutes and looked like a man who has played every second this season. Went in the book for a first half pull-back on Munir El Haddadi and looked off the pace throughout, offering little in attack and looking uncharacteristically vulnerable against Alaves’ runners.

DF Raphael Varane, 6 — A clamorous mistake at 2-1 invited Pedraza through on Navas, but Varane made amends by chasing down the lively Munir with five minutes to go and the rest of the defence caught out by a ball over the top. Otherwise, he did not have a great afternoon against Alaves’ frontline and was often caught out of position.

DF Sergio Ramos, 7 — Although he was the best of an average bunch at the back, Ramos was overly complacent in not closing down Munir for Alaves’ goal and should have hit an unguarded net 15 minutes from time to put his side 3-1 up, blasting his shot over the bar from close range.

DF Nacho, 7 — Matched his captain’s example and was generally solid at the back and active in attack. Real were far more dangerous from Nacho’s flank, the canterano drawing a sharp save from Pacheco with a header and dealing better than most with balls into the box.

MF Casemiro, 7 — A typically combative performance from the Brazilian. No player on either side made more tackles or won more balls in the air, but he was overrun in midfield at times and got his hatchet out in response; one of his numerous fouls led to Alaves hitting the post.

MF Dani Ceballos, 9 — Opened the scoring on 10 minutes with a low shot into the corner and added his second with a well-taken, opportunistic strike, with Alaves’ back line tripping over each other. Two goals on his Liga debut for Madrid in a hotly contested 2-1 win is a decent afternoon’s work by any standard.

MF Isco, 8 — The brightest Real spark going forward, Isco laid on plenty of chances for his colleagues, including a perfectly weighted ball over the defence for Ronaldo that was sent onto the post. Should have scored in a one-on-one with Pacheco, or squared for Ronaldo, as the Portuguese was keen to point out, but he was above the average.

FW Lucas Vazquez, 7 — Energetic as always, Vazquez perhaps should have hit the target from Marco Asensio’s drilled delivery on 27 minutes. Looked for Ronaldo throughout with deliveries from the right and left, and tested Pacheco himself with a decent effort late on.

FW Cristiano Ronaldo, 7 — Premiered a new free kick trick on to Ramos’ head but for a second game running, couldn’t repeat his standard one of hitting the net. Ronaldo shaved the post with his right and hammered Pacheco’s upright with his left after excellent footwork to carve himself the chance but his account remains blank in La Liga.

FW Marco Asensio, 7 — A fine performance from the man of the moment, if not a dazzling one, Asensio was full of running and took the game to Alaves from the first minute to the last, almost scoring the much sought-after third goal with the final kick of the match and assisting Ceballos’ opening strike.

MF Marcos Llorente, N/R — On for Ceballos, he received a huge ovation from his former faithful and was tidy enough during his cameo.