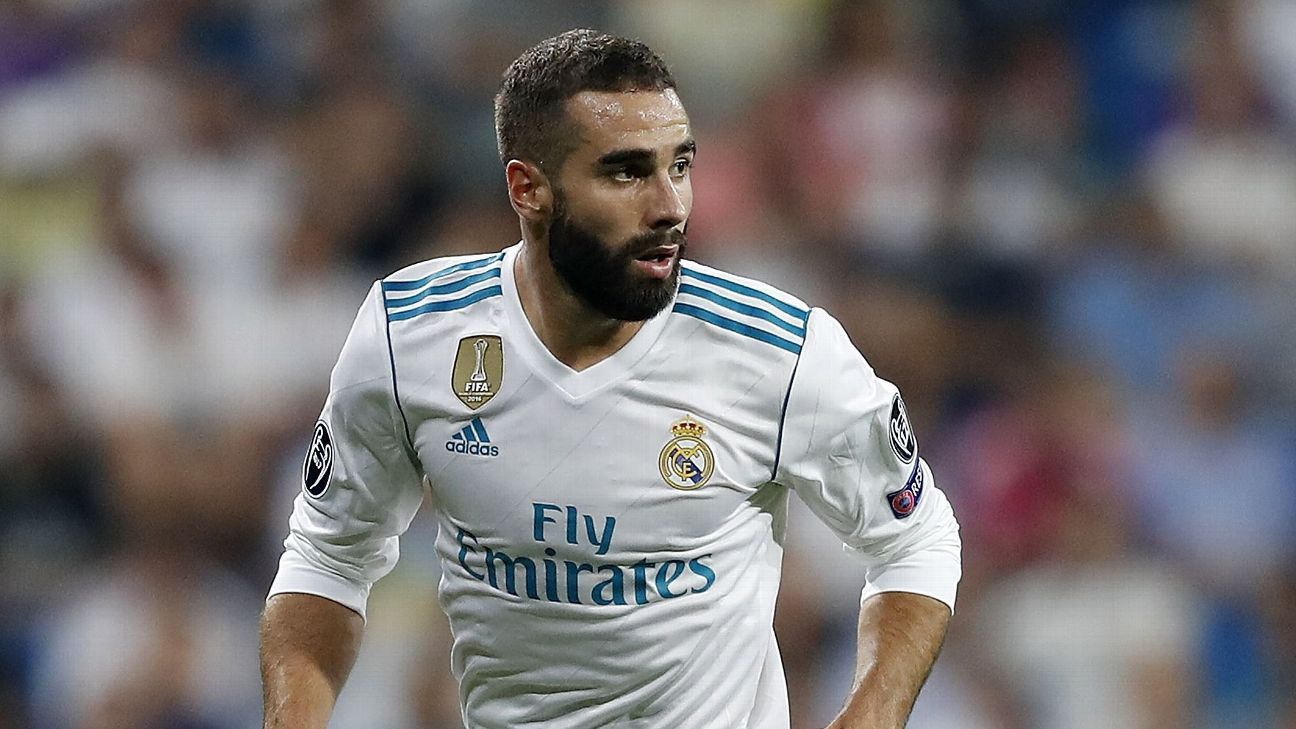 
Dani Carvajal says he would be “delighted” to be Real Madrid captain in the future after signing a two-year contract extension on Monday.

The 25-year-old put pen to paper on his new deal on Monday afternoon, tying himself to Madrid until June 2022.

“I’m very grateful to the club,” he told the club’s website. “I couldn’t be happier, it’s another important day to remember in my life after extending my contract with the club that means the world to me, the club that has seen me grow. I’ve been fortunate to win every title with Real Madrid and I’m looking forward to winning them again.

“My goal is to win as many titles as possible. Going down in the history of the club isn’t easy. This generation is doing that and all of madridismo is proud of us.

“I would like that the day that I leave, everyone knows that I have given everything for this club and that they are proud.”

In addition to winning titles, Carvajal said his individual goals could include taking over as captain if the opportunity arises down the road.

“It would be a lie if I said I hadn’t thought about it. Being Real Madrid captain is something which everyone dreams of,” he said. “But you have to think about the present, Sergio Ramos is the captain and if the day arrives, it’ll be a long time from now. And obviously I would be delighted.”

And the right-back said he had no interest in opportunities to leave the club before the new deal is up, hinting at a “high” buyout clause.

“When someone is as certain as I am, I want to always be here, I don’t even bother listening to the offers,” he said. “I’m focused on giving my best and the club is rewarding me. We don’t listen to offers.

“I don’t remember exactly what the [buyout] clause is, but it’s high so that no one can take me away.”

A youth product of Los Blancos, the Spain international broke into Madrid’s first team after returning to the Bernabeu stadium following an impressive 2012-13 campaign at Bayer Leverkusen, where he made 32 appearances and helped the Bundesliga side qualify for the Champions League. Madrid agreed to re-sign him for a pre-agreed fee of €6.5 million.

Asked about then-manager Jose Mourinho’s decision to let him go to Germany, Carvajal said: “I was in the academy and at that moment he didn’t think I was ready for the first team. Then our paths went different ways and I returned to the club.”

On his return under Zinedine Zidane, he added: “In sportsperson’s career there are good and bad times. The important thing is to overcome them and become stronger. The decision to leave the club was good from the point of view of my growth. I trusted myself and I responded well.

“From the first moment Zidane arrived, he put his faith in me. I’m unbelievably grateful to him for that. My confidence grew with the change of coach and the results are being seen with him.”

Leganes-born Carvajal has made 159 appearances in all competitions for Madrid since, scoring four goals and setting up 23 more in the process.

At Madrid, the right-back has won one La Liga title, one Copa del Rey and three Champions League trophies. He started in all three finals of Europe’s elite club competition with Real.

His solid performances in the 2016-17 campaign earned him a place in both La Liga’s ideal starting XI and the UEFA Champions League squad of the season.

Carvajal is the third Real player in the space of five days to sign a new contract until 2022 with left-back Marcelo and midfielder Isco having done so last week.