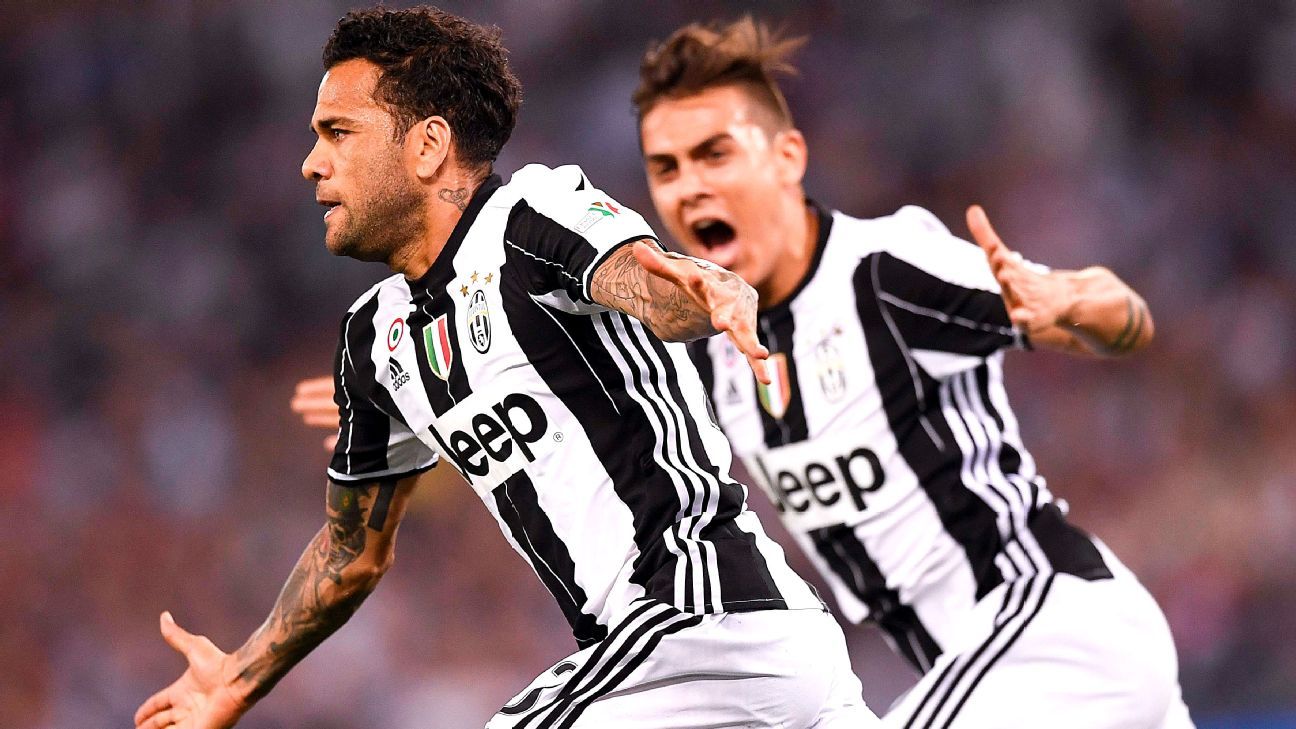 
Pep Guardiola wants his Manchester City full-backs to play in the way Dani Alves did for him when they were together at Barcelona — and the easiest way to do that is to buy the Brazilian himself.

Sources have told ESPN FC that City are interested in signing the Juventus right-back, who could be available for as little as £5 million.

City are in the hunt for new full-backs after Guardiola allowed Pablo Zabaleta, Bacary Sagna and Gael Clichy to leave at the end of their contracts in June along with winger Jesus Navas, who ended the season at right-back.

The coach wants more energy from his full-backs to implement his philosophy at City, which requires them to supplement attacks as well as defend. His options last season just weren’t able to offer what he wanted and he had to alter his style to fit.

“We don’t have full-backs to go up and down, up and down, because all of them are 33, 34 years old, so I adapt with the quality of players,” Guardiola said after the 0-0 draw with Manchester United in April.

“Last games we played with Jesus and we attack a lot with the full-back, but Pablo, Sagna, Kolarov and Clichy — all of them they are more than 33 years old and they don’t have the legs to go up and down. That’s why I prefer they play in other positions.”

Alves has just turned 34, but his performances for Juve in helping them to the Italian double and to reach the Champions League final are proof that he still has plenty to offer and is the perfect fit for Guardiola.

He missed just one of Juve’s run to the European final — the final group game against Dinamo Zagreb when he was recovering from a broken fibula. And his contribution in the competition was crucial — scoring three goals and supplying four assists, including two in the semifinal first-leg victory away at Monaco.

Alves was used more sparingly in Serie A but sources have told ESPN FC that he is unlikely to be the only right-back to arrive at the Etihad Stadium in the summer, with Tottenham Hotspur’s Kyle Walker a leading target.

It would suit Guardiola to rotate between two quality full-backs if he is to challenge for the Premier League and Champions League and Alves is still at the top of his game.

After the 2-0 win in Monaco, former Manchester United and England defender Rio Ferdinand hailed him as still the best right-back in the world.

“He’s still the best in the business bar none,” Ferdinand said. “He is the best with the ball, he defends when he needs to, you saw against Barcelona, he had Neymar in his pocket. He does every part of the game that you want from a right-back in modern day football.”

Guardiola questioned the winning mentality of his squad last season and Alves is a player, who won’t accept mediocrity and will be ready for the challenge of helping City take the step to the next level.

“It is not just the quality, it is the mentality and the presence to play at that level,” the City boss said after their Champions League exit to Monaco in the round of 16. “Of course we have to make changes for next season. It is how they play in big situations.”

Alves is a serial winner. In a remarkable eight-year period at the Camp Nou, he won six La Liga titles, four Copa del Reys and three Champions Leagues. He had already won four trophies at previous club Sevilla and throughout his career he has an enviable list of personal honours including making the UEFA team of the year four times and FIFPro World XI six times.

It’s the sort of record that makes Alves one of the true greats currently in the game and would seriously enhance City’s reputation as one of the leading clubs in Europe.

Similarly, the famously flamboyant man from Bahia has a substantial fan base on social media — 7.9 million Twitter followers, 8.2 million likes on his Facebook page and a huge 14.8 million followers of his Instagram account — meaning he would also boost the club’s global profile with his off-pitch popularity.

Alves’ arrival would also help Guardiola, who is trying to attract top players to the club as he embarks on another major overhaul of his squad.

Leading players such as Arsenal forward Alexis Sanchez and Juve centre-back Leonardo Bonucci are high on his wanted list and they would relish the opportunity of playing alongside Alves.

And other full-back targets — Monaco’s Benjamin Mendy, Southampton’s Ryan Bertrand and England international Walker — could learn all about Guardiola’s demands from a defender, who knows him better than most.

Similarly he can pass on his experience to emerging talent at City’s Academy with the likes of Spanish youngster Pablo Maffeo and England Under-17 international Joel Latibeaudiere making exciting progress.

Alves has never played in England and may be tempted by the opportunity of working under Guardiola one more time. He could just be the ideal addition for City.