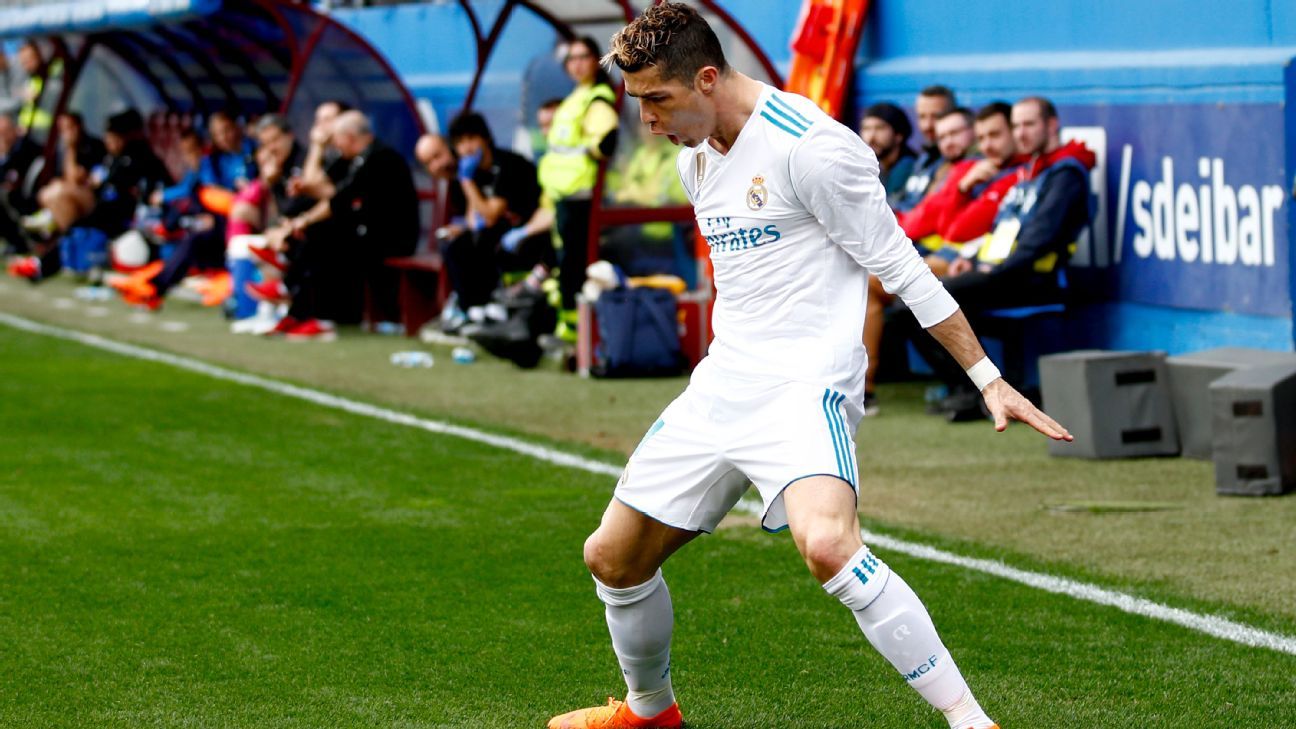 
Real Madrid, 2-1 winners over Eibar on Saturday, continue to rack up points in La Liga despite their title defence being all-but over.

They found the transition from midweek Champions League football to afteroon La Liga action a slog in the first half but found a way to win even when not at their best. The three points at Ipurua puts pressure on Valencia and Sevilla just below them in the table as they grab control of third place and automatic Champions League qualification.

The return of Luka Modric. He drove Real Madrid on when they needed someone to make a difference and offered a balance in the side that no other player comes close to.

Despite being stuck in second gear for most of the game, Zinedine Zidane will be happy that his side managed to squeeze out a result and Cristiano Ronaldo’s form is staggering. The Portuguese, who netted a brace here, has scored 14 goals in eight games in La Liga and 17 in his last 10.

Madrid are saving themselves for the Champions League and they are getting results in La Liga but it seems only a matter of time before their lackadaisical attitude in domestic competition seeps into their European campaign.

Isco’s form has taken a nosedive and it’s hard to see a way out of it for the 25-year-old, who has just one assist in his last eight games.

7 — Zidane played a strong XI while also taking the opportunity to rest Marco Asensio and Lucas Vazquez. Motivating his players for La Liga games as they watch Barcelona march towards the title must be difficult but they continue to soldier on.

GK Keylor Navas, 8 — Busy in the opening half and brave time and time again. He was forced to come off his line and head clear at one point, organised his defence for several corners and free-kicks and did well in general.

DF Dani Carvajal, 8 — Tasked with keeping an eye on possibly Eibar’s most creative force in Takashi Inui. Had his hands full but responded well and got forward too with a lovely assist for Ronaldo’s winner.

DF Raphael Varane, N/R — Forced off after 28 minutes after a nasty clash of heads. His fitness will be more important than his performance during his short spell on the field but had to withstand early Eibar pressure and did well when called upon.

DF Sergio Ramos, 6 — Excellent in the first half but lost Ivan Ramis for the equaliser at the start of the second. Did well after that, doing many of the simple things right along with his excellent defensive positioning. That lapse in concentration, however, is a massive blot on his copy and gave Eibar hope.

DF Marcelo, 8 — Along with Modric, the Brazilian created as many chances as anyone for Real Madrid with three. He also had the same number of attempted passes as Toni Kroos, 53, which was the most on the team. He was heavily involved and was typically frisky on the left.

MF Casemiro, 6 — A quiet game as Eibar looked to play through Inui and Pedro Leon on the wings. He didn’t have a single shot at goal, which is strange for the increasingly adventurous defensive midfielder.

MF Toni Kroos, 7 — A tame return to action for the German even if he did have the most successful passes for either side in the game with 44. Eibar had more possession and didn’t allow Kroos any time to really settle into his usual flow. Zidane will be happy that he got over 70 minutes out of his midfield maestro as his options continue to increase in the centre of the field.

MF Luka Modric, 9 — He looked like a man who had been out for two weeks in the opening exchanges but he found his feet midway through the first half and never looked back. An exquisite pass to set Ronaldo up for the opener. A typical tour de force from the Croatian against tricky opponents.

MF Gareth Bale, 7 — He tried hard and created a number of chances along with having a few himself. Zidane left him on for the entire game, which will be a boost to his confidence. He is still trying to get back to his very best and doesn’t look comfortable playing in a central attacking role and continues to drift to the wings. He looked dangerous on occasion and should have had an assist when he delivered a ball for Ronaldo that was saved by Marko Dmitrovic.

FW Isco, 5 — Disconnected for the majority of the game and is seriously lacking in confidence. Eibar like having the ball and the game didn’t suit the creative midfielder, who was hardly in the mood for working his way into it. Taken off after 71 minutes and looked less than pleased as several other players continue to move ahead of him in Zidane’s plans.

FW Cristiano Ronaldo, 9 — Found himself in a number of dangerous positions and took his two goals, at important times, very well. Zidane said Ronaldo was “from another galaxy” when asked about his talisman after the game. He might be right.

DF Nacho, 6 — Introduced for Varane after 28 minutes when he suffered a head injury. Madrid looked a lot more solid with their utility man at the back.

MF Lucas Vazquez, N/R — Added more directness when he replaced Kroos on 71 minutes and the winning goal came when Carvajal overlapped and Vazquez took Eibar’s left-back with him inside. The academy product continues to prove his worth and Zidane’s trust in him is growing every week.

FW Karim Benzema, N/R — Replaced Isco as he moved to the very top of Madrid’s formation. Was not heavily involved but his movement helped the visitors soften up Eibar’s defence, with the end result being a Ronaldo winner.