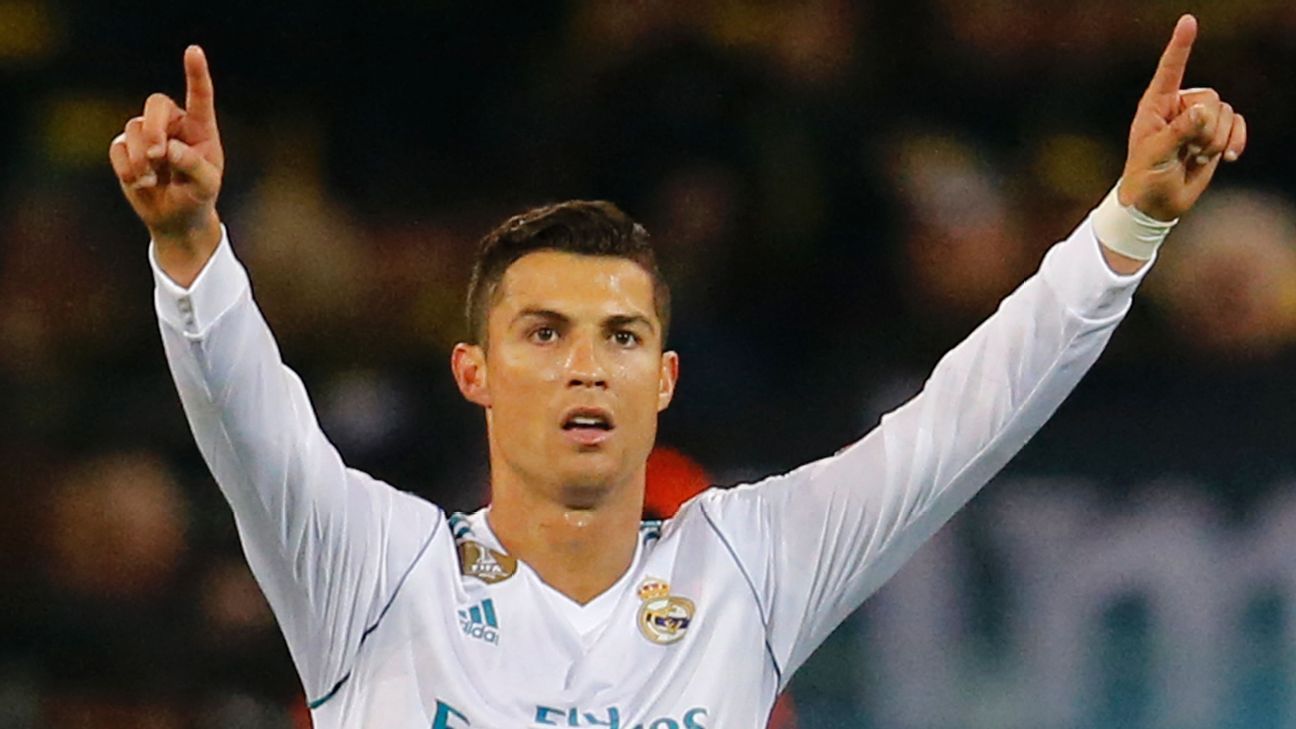 
Speaking after Real Madrid’s victory over Apoel Nicosia in the opening round of European fixtures, Cristiano Ronaldo stressed the importance of the Champions League to the most successful club in the competition’s history. “We want to win it. It’s Real Madrid’s competition,” he said.

It certainly is the tournament that will provide the most gleaming footnote to Ronaldo’s career when he has kicked his last ball as a professional and he was at it again on Tuesday. The Portugal international’s brace against Dortmund on took his tally in the Champions League to 109 goals in 142 appearances, a remarkable statistic in itself made even more noteworthy when taking into account that Ronaldo did not get off the mark until his 27th appearance in the competition, hitting the net twice for Manchester United in a 7-1 demolition of Roma in 2006-07.

There is something about Europe that lights the fuse under Ronaldo’s insatiable desire to score. He has plundered seven hat tricks in the Champions League, and his double in the Westfalenstadion was the 31st occasion he has scored two or more in a game. He also is the first player to reach 50 goals in the knockout stages and the only one to have scored in three Champions League finals.

It seems a slight injustice that Ronaldo is destined to be remembered for one of those above all others: the penalty he scored in the 2013-14 final against Atletico, Real Madrid’s fourth in a 4-1 victory after extra time in a game that will scarcely go down in history as “the Ronaldo final.” The Ronaldo celebration already is imprinted on public memory, enshrined for eternity by the photographer’s lens as the Real forward tore off his shirt and struck a now infamous pose.

Not that Ronaldo will be bothered in the slightest. A player who revels in drawing the ire of opposition players and fans, the he never has been the shy, retiring type. He maybe lacks a little of Zlatan Ibrahimovic’s self-aware charm, but he is not averse to slipping into the third person when thumbing his nose at his detractors.

“Those who always criticise Cristiano are going to have put their guitar back in its case,” he said after scoring twice in last season’s 4-1 triumph over Juventus in Cardiff, which sealed a fourth Champions League for his collection.

A man who co-curates a museum dedicated to his own ennoblement is never likely to win the crowd, but Ronaldo is not out to do anything of the sort. When the dust settles on his time in the arena, it is statistics, pure and simple, that he will continue to point to as the debate about his place in the pantheon of the greats goes on.

“Whether people like it or not, the numbers speak for themselves,” Ronaldo said in 2016. “I don’t doubt that I will go down in footballing history. … I will be up there with the rest.”

There are few records left to be broken in Europe, and Real Madrid stand on the cusp of one of them — a modern-era Treble. Having finally snapped the hold of Arrigo Saachi’s peerless Milan side on the last European Cup back-to-back triumph, Zinedine Zidane’s team now have the opportunity to match Ajax (1971-73) and Bayern Munich (1974-76) by winning the competition three times in a row, with the Frenchman holding a chance of becoming the only manager in history to win the competition three times consecutively.

It has always been club policy to prioritise Europe, a historical throwback to when Madrid dominated the tournament in its infancy. Few could argue that it was a less daunting task in the 1950s: Real’s fifth consecutive title came courtesy of a 7-3 thrashing of Eintracht Frankfurt and the club played only six games to reach the final, two of them a 12-2 aggregate drubbing of Jeunesse Esch in the last 16.

With the relative strength of sides in the competition now considerably greater, it requires either an era-defining team or, at the very least, an era-defining player to win back-to-back titles. Even at their zenith, Pep Guardiola’s Barcelona could not achieve the feat, which has also eluded managers of the calibre of Alex Ferguson and Carlo Ancelotti, one of only two coaches to have lifted the trophy three times.

Zidane’s side may have started their domestic campaign inauspiciously, but in Europe the fairy dust remains in good supply with Ronaldo in typical form — four goals in two games — and a first-ever victory over Dortmund in Germany in the bag. The top scorer (joint with Lionel Messi and Neymar in 2014-15) for the past five Champions League seasons, Ronaldo is the fulcrum of Real’s continental successes and a player uniquely designed for the competition, even if his place within its history will remain framed by one moment of shirtless imprudence.