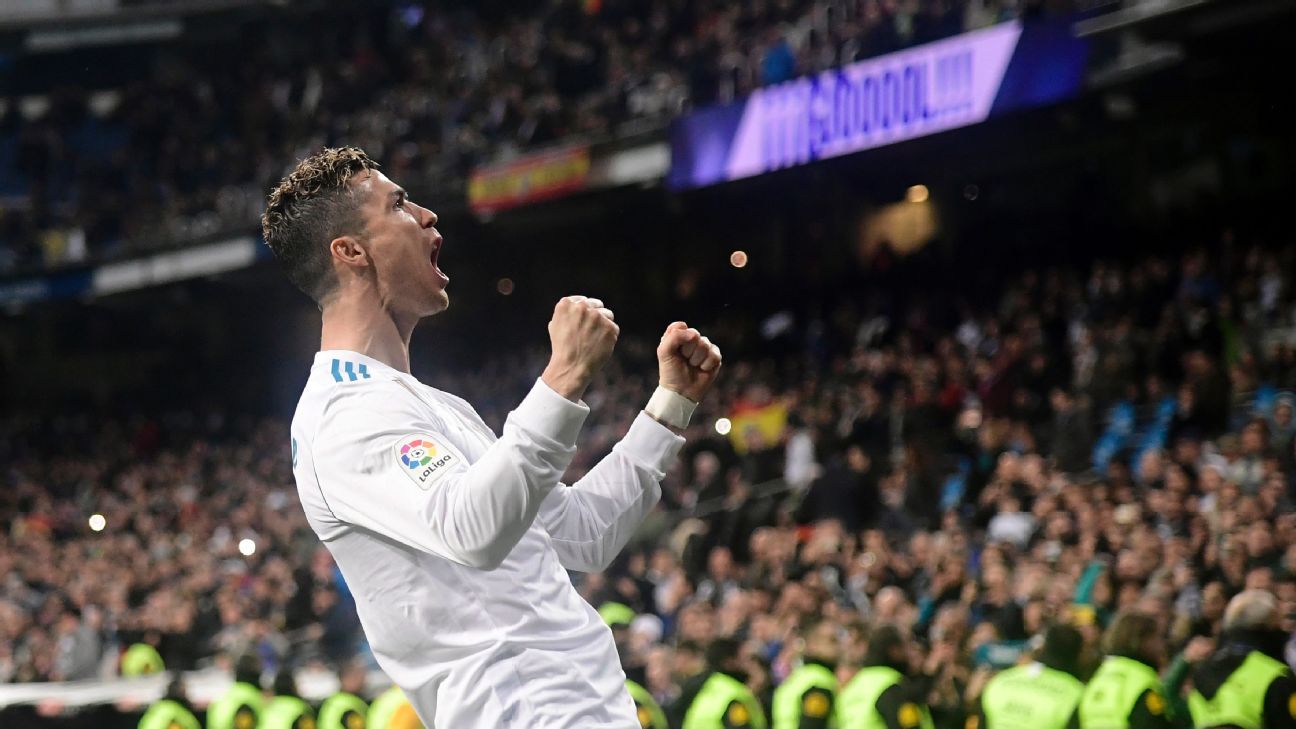 
Real Madrid and Girona played an enthralling game in the Bernabeu that ended 6-3, with the keepers instrumental in keeping the outcome reach double figures.

Cristiano Ronaldo will dominate the headlines after bagging four with Lucas Vazquez and Gareth Bale also on target. Cristhian Stuani (two goals) and Juanpe replied for Girona, who apparently forgot their gloves in the dressing room.

Ronaldo is now officially back as the season reaches its climax, netting his 50th career hat trick. Karim Benzema was imperious and Toni Kroos put on a master class in midfield. Real faltered after Girona’s equalizer but found enough class late on to break the five-goal mark for only the second time this season in La Liga — against a side that had kept six clean sheets in their last nine games.

Stuani, who leads Europe’s top five leagues in headed goals, had the freedom of the Bernabeu to bag twice unattended, as Keylor Navas was quick to point out to his back four. Girona are noted for their aerial prowess yet scored three headers against a defence that seems destined to forever suffer under high balls. Juventus will have taken note.

6 — It’s difficult to say how much influence either coach had on a game that defied any prematch blueprint, either than Girona’s expected bombardment from the flanks, and Zidane should have been better prepared. Sergio Ramos’ absence was keenly felt but Real’s marking at corners was amateurish at best. Even the deployment of wide men in Vazquez and Marco Asensio did little to stop the visitors rolling out their Plan A practically unchallenged.

GK Keylor Navas, 8 — Kept his side in it with three vital saves and came off his line to bail out his floundering defence with confidence and quick decisions. Picked the ball off Stuani’s head at the end of the first half at 1-1 with Raphael Varane eating the Uruguayan’s dust.

DF Dani Carvajal, 5 — At 5-foot-7, what Carvajal was doing marking Stuani for Girona’s first two goals is anyone’s guess, but it is a mistake Zidane will have jotted in his notebook. A bad-tempered and under-par display earned a yellow card that means he will miss the game at Las Palmas — probably an on-script booking with the derby a week later.

DF Raphael Varane, 7 — A classy performance on the deck, covering the lines with graceful ease, was marred by a losing battle against Girona’s big men in the air and a horrible back pass that Navas managed to salvage.

DF Nacho, 7 — Struggled to contain Portu when covering Marcelo’s flank but, unlike Varane, won four aerial duels, more than any Real player, even if he handed Juanpe the keys for Girona’s third.

DF Marcelo, 6 — Generally alert to balls aimed over his head towards the far post and electric going forward. The Brazilian has recovered from a slump in form but was suspect in his positioning in open play and made a mug of by Portu late on.

MF Mateo Kovavic, 7 — Settling into his role as Luka Modric-lite, the Croatian covered every inch of grass, sought the ball and rarely misplaced a pass in all-action display.

MF Toni Kroos, 9 — Often overshadowed by Modric, Kroos pulled out his full passing repertoire with two assists for Ronaldo, a beautifully disguised ball for Vazquez and a work of art in the lead-up to the fourth. A decent defensive contribution was capped with a vital block as the last man at 4-2 to deny Anthony Lozano.

MF Lucas Vazquez, 8 — Should have scored in the opening 10 minutes but fired straight at Bono. Vazquez had the ball in the net with a smart finish wrongly ruled out for offside and eventually got on the score sheet in the second half in a typically lung-bursting display.

MF Marco Asensio, 7 — Willing to drop back to cover for Marcelo and counter Pablo Maffeo’s incursions, Asensio was tireless driving forward and a constant source of danger, testing Bono with a stinging free kick in a solid all-round performance.

FW Karim Benzema, 9 — Once again the Frenchman performed his undervalued role as provider as he picked Girona’s compact defence apart. A few loose balls drew the ire of the stands but this was one of his best performances of the season. He had a hand in three goals and put in a shift in defence as well, leaving to a deserved ovation.

FW Cristiano Ronaldo, 10 — Whatever Mo Salah can do … and Girona are a far better side than Watford. Ronaldo scored his 18th, 19th, 20th and 21st goals of 2018 — all of them first-time strikes and two technically impeccable — while unselfishly teeing up Vazquez for Real’s third when on his hat trick.

FW Gareth Bale, 6 — On for Asensio, got on the score sheet with a late clip over Bono.

MF Isco, NR — On for Benzema, his only real contribution was avoiding a yellow for a cynical trip on Alex Granell.