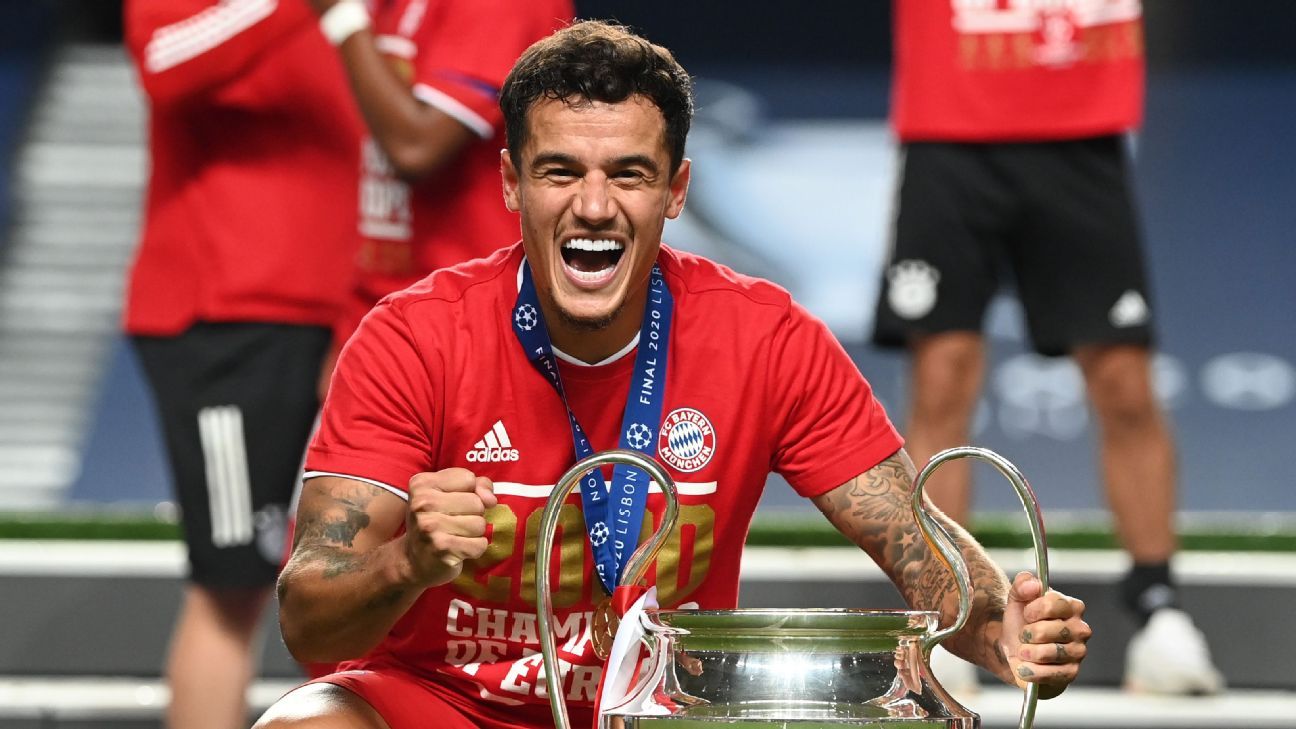 Philippe Coutinho will speak with Ronald Koeman about his future this week, with Mundo Deportivo reporting that the new Barcelona coach will tell him he’s in his plans for the upcoming season.

Coutinho, Barca’s record signing at €160 million, has spent the last season on loan at Bayern Munich and came off the bench as the German side beat Paris Saint-Germain 1-0 to win the Champions League final on Sunday.

Barca have been trying to sell Coutinho for several months, with his agent Kia Joorabchian recently saying the Brazilian is keen to return to the Premier League.

Coutinho’s name was also conspicuous by its absence on the list of players that Barca president Josep Maria Bartomeu said were not for sale last week.

However, with a lack of clubs willing to pay Barca’s €80m asking price and a change of manager in the Camp Nou dugout, Coutinho could be handed a second chance in Catalonia.

“I’ve not thought about next season yet,” Coutinho said on Sunday. “I have to return to Barcelona and I am excited to work hard and have a great season. I don’t know if it will be with Barcelona, but I have to return there first.”

– Stream ESPN FC Daily on ESPN+ (U.S. only)
– Hunter: How Koeman’s Barca dream could be a nightmare

Gabriel will travel to London for a medical on Monday before signing a contract at the Emirates.

The 22-year-old did not feature in Lille’s Ligue 1 opening day draw against Rennes on Saturday.

Arsenal have fended off competition from Manchester United, Everton and Napoli to secure Gabriel’s signature.

10.40 BST: Manchester United midfielder Paul Pogba is in talks over a new contract the club, according to his agent Mino Raiola.

Pogba has entered the final year of his existing deal, although the club hold an option to extend until 2022. The France international has been linked with a move away from Old Trafford but Raiola said he will not leave the club this summer.

“He is at the heart of the important project” he told Sky Sports Italia. “Even in previous years, United have never entertained offers.”

Asked whether he is close a new contract, he added: “We are talking very calmly without any stress.”

Last month, Pogba said he was “happy” at the club amid reports he wanted to join Real Madrid or Juventus.

The Spanish midfielder, who turns 32 next week, played a key role in Bayern’s first Treble run in 2013, but has dropped down the pecking order in recent seasons.

A €40m signing from Athletic Bilbao in 2012, Martinez is reportedly flirting with a return to his old club but could also make the move to Serie A side Fiorentina.

Bayern Munich are holding out for a fee in the €10m region and because of his services for the Champions League winners will not throw any stones in his way.

09.39 BST: PSG captain Thiago Silva has denied reports that he has agreed a deal to join Fiorentina this summer.

The Brazil defender, 35, played his final game for PSG in their Champions League final defeat to Bayern on Sunday and he is now out of contract.

Sources told ESPN’s James Olley last week that Thiago Silva had been offered to Chelsea, while other reports claimed that the former AC Milan player would return to Italy and join Fiorentina.

However, he told Sky Sport Italia: “I’ve not accepted any bid. Reports of an agreement reached with Fiorentina are not true. My agent is talking with Fiorentina as with other clubs. I’ll decide on next days with my family.”

09.00 BST: Paris Saint-Germain manager Thomas Tuchel says Lionel Messi would be welcome at the club if he ever decided to leave Barcelona, but he does not expect the Argentine forward to do so.

Messi, who joined Barcelona aged 13, has scored a record 634 goals for the club in 730 games and is also their most decorated player with 33 trophies but the 33-year-old is into the final year of his contract at the club.

Reports in the Spanish media have cast doubts about his future at the club after a disappointing season that culminated in an 8-2 Champions League humiliation by Bayern Munich in the quarterfinals this month.

“He’s very welcome. What coach says no to Messi?” Tuchel told BT Sport after his side lost 1-0 to Bayern in the Champions League final on Sunday.

Leicester City have joined Chelsea and Inter Milan in wanting to sign Lille forward Jonathan Ikone, according to Le10Sport.

The French international is one of several players, alongside Victor Osimhen, Gabriel Magalhaes, Mike Maignan and Boubakary Soumare, to potentially leave the club this summer.

ESPN’s Tom Hamilton reported Sunday that sources close to the situation have said that Gabriel’s departure to Arsenal has been confirmed.

Ikone’s stock has been on the rise the past few seasons, and though Chelsea and Inter Milan are said to be interested, Leicester look the most likely to weigh in with a firm offer, with Brendan Rodgers keen to add another dimension to his attack.

The decision is up to the player, with Lille seemingly happy to let him leave for the right price. Ikone has one year left on his contract, which means the French side would rather cash in while they can this year than lose him for nothing next summer.

Pogba to snub Real and Juve for United stay

Paul Pogba is likely to stay at Manchester United beyond this summer, according to his agent, as reported by ESPN earlier Sunday.

Pogba, who missed much of the previous season because of injury, has been linked with a move to Real Madrid for the past 12 months, while previous club Juventus have also been interested in re-signing the French international.

However, Pogba’s agent, Mino Raiola, said United “won’t accept any offer for Pogba this summer” and insisted that the World Cup winner will commit himself to the project at Old Trafford.

Pogba forged a successful partnership with Bruno Fernandes following the Premier League restart, and Reds boss Ole Gunnar Solskjaer is hoping the duo can help his side mount a tangible bid for the title next season.

Barcelona harbour aspirations of adding Valencia defender Jose Gaya to their squad, and to do that, they need to offload Junior Firpo, and Napoli, Inter Milan and Torino are all interested, according to Sport.

The Spanish outlet is reporting that all three Serie A clubs have made contact with Barca, and now the decision rests with the player.

Barcelona will need to decide whether they want to release Firpo on a permanent deal or by offering him out on loan, with the club having an option to buy.

Whatever they decide, Gaya is believed to be a priority, and though Valencia are struggling financially, they would rather keep the full-back. A bumper Barca offer, though, could help keep the wolves from the door at the Mestalla.

– Pepe Reina is expected to join Lazio rather than Valencia, Corriere dello Sport reports. The Spanish keeper agreed a move to the Mestalla Stadium but grew tired of waiting for an offer while Valencia tried to offload existing keeper Jasper Cillessen. The 37-year-old could move to Lazio this week, despite having one year left on his AC Milan contract, after having spent the second half of last season on loan at Aston Villa.

– Aston Villa boss Dean Smith is hoping to bring Kieran Trippier back to England from Atletico Madrid, the Telegraph reports. Smith is open to a permanent or loan deal as he looks to shore up his defence for the new season. Trippier played 33 matches last season as Atletico finished third in La Liga, this after he made 114 appearances for Tottenham Hotspur between 2015 and 2019.

– Premier League clubs are on red alert, with Barcelona putting Rafinha up for sale for just €16m. According to Sport, Everton, Arsenal and West Ham United are all keen to land the midfielder. Barca are believed to have had an offer from Lazio, but Rafinha is unlikely to return to Serie A following his loan spell at Inter Milan and is expected to move to England instead.