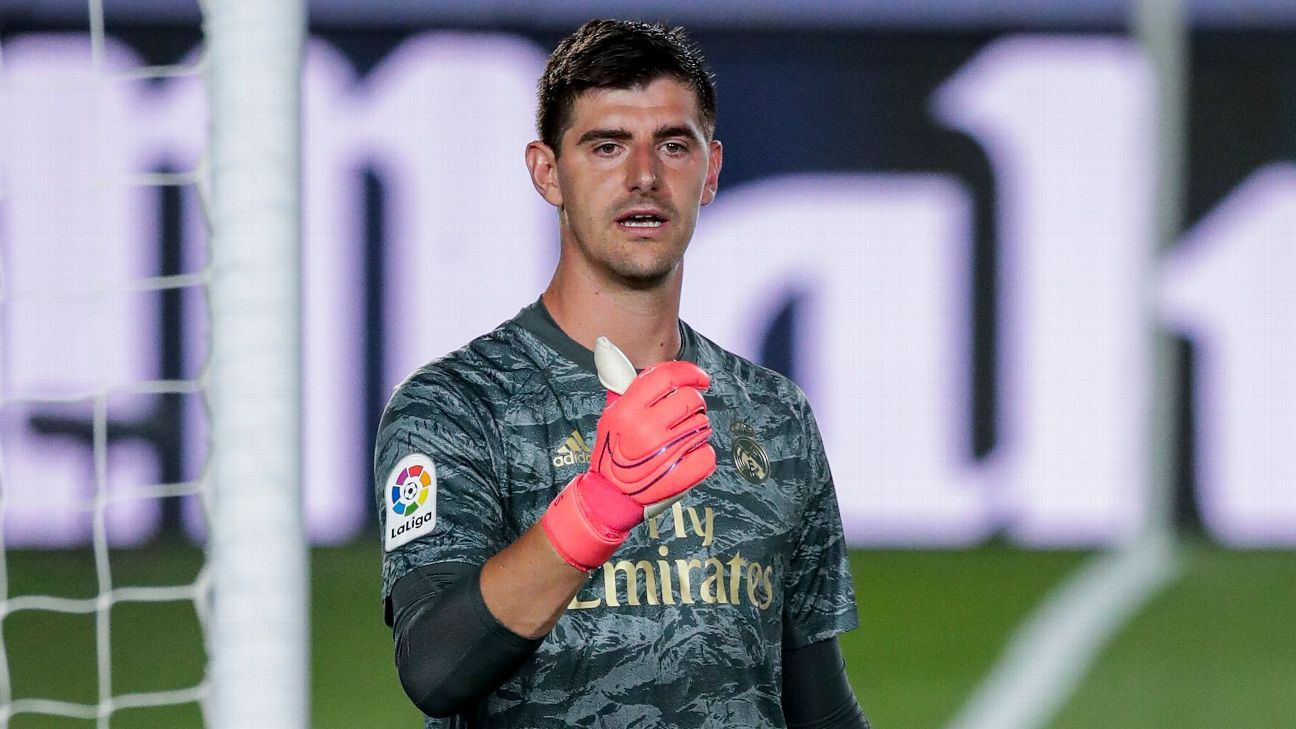 
It seems ludicrous now, but there were times this season when some thought Thibaut Courtois‘ spell at Real Madrid a failure and that it might even end early. And in tears. The context is that the goalkeeper’s first season had been a horrendous experience for him and his new team. Early on, this one seemed to be going the same way.

Remember that, despite his years with Chelsea, many Madrid fans still resented the Belgium international who’d defied them so brilliantly in the 2013 Copa del Rey final when Atletico Madrid ended their 25-match, 14-year hoodoo without a win against Los Blancos. Courtois was outrageously good in that ill-tempered 2-1 win at the Bernabeu. Not all Madridistas were willing to forgive or forget.

His first problem, at the club for which he claimed he’d always yearned to play having been inspired by Iker Casillas, was that he was all the president’s man. Keylor Navas was the popular hero. Fans loved his cat-like gymnastics while winning three Champions Leagues — and there was worse for Courtois to cope with.

Madrid’s players pretty much thought of Keylor as a lucky amulet. Back then they played with almost total abandon, secure in the knowledge that the Costa Rican was exceptional against breakaway counter-attacks. He was the king of one-on-ones.

Keylor’s chief admirer was captain Sergio Ramos. The long-serving defender adored the fact that he could sashay forward, at will, and still count on Navas rescuing back one of his (perpetual) nine lives.

Courtois’ arrival, wholly sponsored by the president’s determination to repatriate him from Stamford Bridge, underwhelmed players, fans and the media. Nobody with even half their wits about them could fail to see that Courtois had been, in his day, the world No. 1, or that he could easily win back that unofficial crown. But last season was humiliating for Madrid — and all those who crewed the sinking ship.

Courtois played for three different coaches — Julen Lopetegui, Santi Solari and Zinedine Zidane — totting up just 27 La Liga matches during which he conceded a calamitous 36 goals. Not his fault, all of them. But it’s well understood by all keepers that, guilty or not, people suppose it’s their fingerprints on every crime scene when opponents score. Unfair, but there you have it. Meanwhile, quietly, Navas only conceded eight in his 10 matches in La Liga.

And in the Champions League, Madrid’s touchstone tournament? Courtois was minding the nets when Los Blancos lost at home 0-3 to CSKA Moscow and 1-4 to Ajax. Historic setbacks. Seven goals fired past him in two home matches while being eliminated early — precisely the same number as he conceded in TWELVE matches while helping Atleti march to the 2014 Champions League final.

Nor was the ordeal of fire — which by now seems to have made him tungsten-tough, but back then looked to some like it would melt him — nearly over. Have you forgotten last summer? We aren’t far off the one-year anniversary of Atletico 7-3 Real Madrid in their International Champions Cup match at MetLife Stadium, New Jersey. Courtois started the match… then handed over to Keylor at half-time. The only problem was that, by then, Madrid were losing 5-0.

Fingers were being pointed, Keylor was still on the books — some were hoping that not only would the Costa Rican be reprieved but that Courtois, Florentino Perez’s personal selection and a €35m outlay, would be benched.

By the time Oct. 1 arrived Courtois, one of the principal heroes of what will be only Madrid’s ninth title in 30 years, still hadn’t donned the Superman cape which, now, seems stitched onto his shoulders. He’d registered only two clean sheets in six league matches, conceding an average of one goal per 90 minutes, and Madrid had won just 50% of those contests.

The first day of October brought lowly Club Brugge to the Bernabeu, Courtois played oddly as his countrymen went 0-2 up — and then he didn’t reappear after half-time. It seemed like a breaking point, perhaps not the point of no return but Madrid felt forced to deny a made-up story that their towering, previously triumphant, keeper was suffering from nerves. It was nonsense — he was badly ill. So dehydrated and sick that his dad, Thierry, needed to drive him home while Alphonse Areola deputised and played terrifically as Madrid fought back to draw 2-2.

From that day to this, even accepting defeats to Mallorca, Betis and Manchester City, Courtois really only has competition from Sergio Ramos, Karim Benzema and Casemiro to be named Madrid’s most influential performer in what should now be a title-winning season. On Monday night the Belgian, again, won the sponsors’ King of the Match as Madrid needed big saves from him to defeat Granada and stay four clear of Barcelona with just six points left in play.

Not only will he win the coveted Zamora award, for the goalkeeper who concedes the fewest times in La Liga (an award which seemed to have become Jan Oblak‘s personal possession), Courtois will also be the keeper who enjoys Madrid’s best defensive record for many decades.

The obvious numbers are that this behemoth of a keeper has gone on, after his pretty moderate start to the season, to concede just 13 times in the next 27 Liga matches. Best of all, he’s been the Fort Knox of Madrid’s gold-standard performances since the restart with six clean sheets and only three goals conceded in 810 minutes.

But Courtois has certainly had plenty of help in converting his statement that he “never lost confidence” while fighting back from the Club Brugge setback into tangible fact.

Madrid’s goals-against record is not wholly down to Courtois. This is the first time since Jose Mourinho’s side won a record-breaking title in 2012 that Los Blancos not only defend all over the pitch, they do so with an all-for-one-one-for-all attitude. Luka Modric and Toni Kroos, this season, do blue-collar mopping up, and mobbing of opponents, which simply left them cold and uninterested last season.

Casemiro is transformed from the sorrowful chap called on to front up almost every post-defeat interview last season with his refrain of “none of us are doing our jobs well and we know it” to being La Liga’s out-of-sight dominant central midfielder. Most tackles, most balls won back, most interceptions — Courtois, some 40 metres (43.7 yards) back, should be between the sticks composing love-letters to the Brazilian. They sit next to each other in the dressing room and get on like a house on fire.

Perhaps Courtois has influenced Casemiro — the younger man is now more serious, harder working and, even if he’s constantly walking a red-card tightrope, he’s applied himself and become the best at his business. The stats to back this up are impressive. Real Madrid have scored the first goal in 66% of their matches. Not once have they lost from that position. Madrid play the third-highest defensive line in La Liga, 39.5 metres on average, between their last man and Courtois.

Now, importantly, they neither believe that they’ll regularly be counter-attacked via that vast space behind Ramos and Raphael Varane nor that Courtois, faced with a one-on-one or two-on-one, will fail to save them. Madrid are the best team in La Liga at avoiding conceding when their opponents are in the final third — 96% of the times Zidane’s team is under pressure in and around their own defensive area, they mop up the danger and their opponent sdon’t score.

Secondly, Courtois has changed. He may dispute that Keylor being sold to Paris Saint-Germain helped matters, but it’s a fact. No Madrid players could mope around at Keylor only being on the bench — even before his form became imperious, Courtois was the outright No. 1 for Zidane’s team. No more debate. He’s used that, gradually, to become a much bigger, noisier and more influential character around the dressing room.

This son of two Belgian volleyball internationals who started his footballing career as a rangy left-back has always been both articulate and interesting. A friendly, intelligent, polite guy blessed with the skill of being fluent in French, Spanish, English and Dutch but with competence in German, too, Courtois was often someone who’d keep his own counsel. He is not one of the leaders in the dressing room or on the training ground, happy to lead by example rather than by popular acclaim or noisy imposition of his character.

Little by little, he’s edged his way into becoming one of the leading voices, helping fill the vacuum behind Ramos whose massive personality and total dominance of team matters meant that there wasn’t a long queue of teammates who thought it necessary to learn the ropes, leadership-wise. Ramos would have us all, and his teammates, believe that he’ll be there, and in charge, forever. But he won’t.

Right now, just turned 28, and with a decade of top-level football ahead of him if he truly craves it, Courtois is happy to be a big personality, a leading Madrid man in this group of mavericks, tough-guys, tyro-kids and proven winners.

Where he rates in the world firmament is up to you. Beauty, with goalkeepers, is in the eye of the beholder. Is he as accurate and pressure-free as Marc-Andre ter Stegen, Alisson or Ederson with his passing or when handling the stress of playing ‘to-me-to-you’ with his defenders as they tippy-tap the ball across Madrid’s penalty box? No, he’s not. But can any of them, Oblak included, claim to be outright better than the big Belgian on his A-game when it comes to the primary duties of a keeper — stopping chances from becoming goals? Probably not.

Just two more clean sheets from Courtois against Villarreal and Leganes and, no matter what anyone else does, he’ll become part of an extremely exclusive band of men who’ve won Spain‘s title for both Atletico and Real Madrid. A band so small that whoever they may be, I can’t find anyone else. After bad things seemed to be following him around, Courtois is now a big man making big things happen.