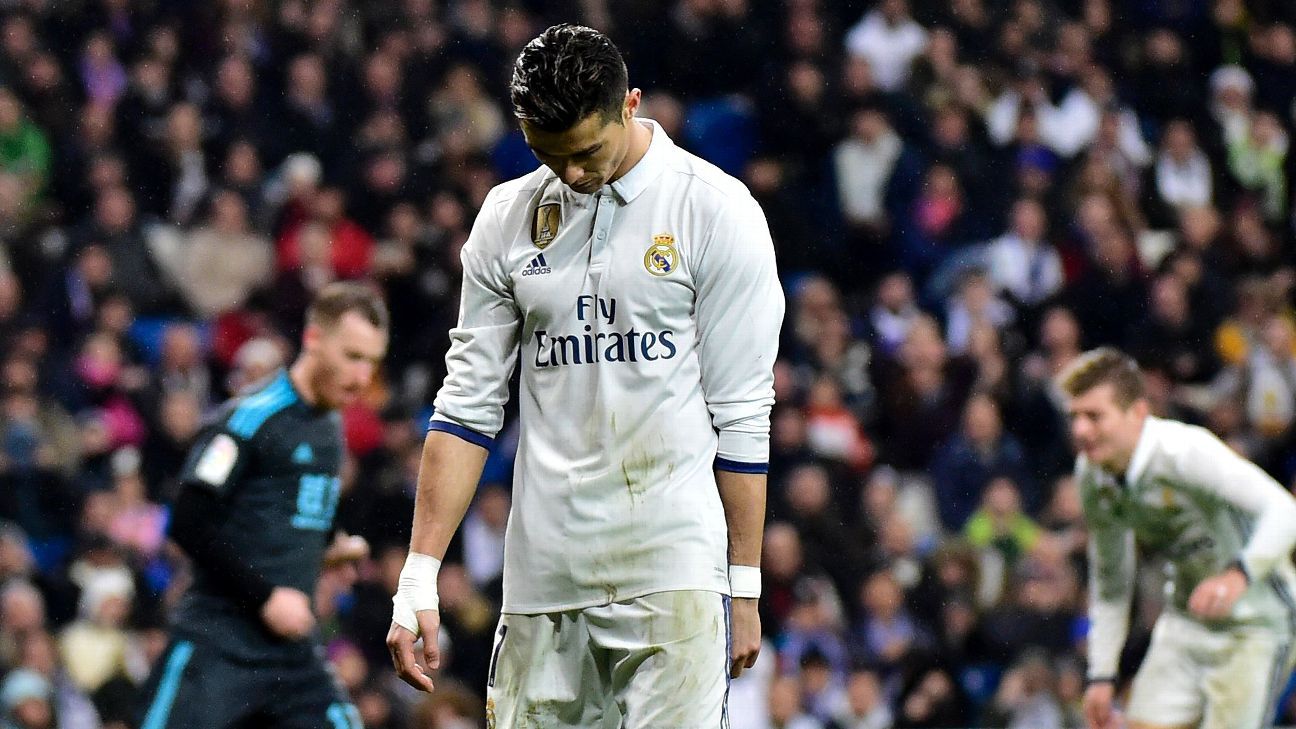 
On July 31, Real Madrid’s Cristiano Ronaldo will appear in a Spanish court to testify in a case in which he is accused of evading taxes.

A Spanish state prosecutor claimed Ronaldo failed to pay €14.7 million on image rights earned between 2011 and 2014 and that he used a shell company in the Virgin Islands to “create a screen in order to hide his total income.”

A judge will decide if there are grounds to charge him with a crime and, if there are, the possibility exists that Ronaldo could be sentenced to time in prison.

ESPN FC addresses the main questions pertaining to the case and also asked experts with knowledge of the situation and its context to explain further: Maeve Buckley is director and co-owner of Irish sports marketing agency Line Up Sports; Jorge Sanchez is director of the international tax department at Madrid-based Montero Aramburu.

Q. What is going on between Ronaldo and the Spanish taxman?

Spain’s Hacienda tax authorities believe that Ronaldo used a network of companies in various countries, including Ireland and the British Virgin Islands (BVI), to hide at least €78m in image rights — or the expression of a personality in the public domain — income between 2011 and 2014.

The investigators also believe that Ronaldo formed another BVI company in late 2014, which now owns his image rights for 2015-2020; the new company pays the player €75m in return.

The prosecution maintain that these arrangements were deliberately created to avoid paying the correct amount of tax in Spain, where the Portugal captain lives and works. This all became public knowledge due to El Mundo reporting, based on Football Leaks documents that were published last December.

In June, Hacienda investigators formulated an official complaint saying Ronaldo had not paid €14.7m due in taxes on his 2011-14 image rights income. Judge Monica Gomez Ferrer accepted that there could be a case to answer and called Ronaldo to her court in the Madrid suburb of Pozuelo on July 31.

“Cristiano Ronaldo will give evidence as an investigado alleged to have committed four crimes against the Spanish tax authority [Hacienda Publica],” Sanchez told ESPN FC. “The proceedings are in the preliminary investigation phase, to allow the judge to determine whether a criminal act took place, the nature of that criminal act, the individuals who took part in it, and the court which should judge it.”

Q. Why do Ronaldo and his advisors appear confident they did nothing wrong?

Ronaldo’s camp claim that he has fulfilled all his tax obligations, hence his agents Gestifute have issued numerous strongly worded denials. Meanwhile, sources close to the player claim the 32-year-old was so upset that he vowed never to play in Spain again.

The Portugal captain’s advisors maintain that the majority of his image-rights income is earned abroad and therefore not liable for Spanish tax. They argue that his 2014 declaration informed the authorities of these revenues (reportedly €5.6m to cover 2009-20). But the prosecutors feel the full amount of tax due is at least €14.7m more, and that for the 2011-14 period only.

Q. What has David Beckham got to do with all this?

The so-called “Beckham Law” was introduced by the Spanish government in 2005 and permits new Spanish residents the choice of paying a flat 24 percent in tax, rather than the variable rates applicable to natives of the country. It also ensured that new residents’ offshore earnings were exempt from Spanish taxes. Although the law has been revised a few times since its introduction, it means that Ronaldo may not have to pay Spanish tax on income earned outside the country.

“If the exploitation of Ronaldo’s image rights had been done by a company which undertakes real economic activity, with the staff and resources necessary to do so, the income earned by this beneficial company from companies other than Real Madrid would have not been subject to Spanish taxes,” Sanchez says.

Authorities in Spain argue that Multisports & Image Management (MIM) — an Irish company to which Ronaldo’s commercial partners are said to pay him — is just a “brass plate” (or phantom) entity used to move money around, and therefore the court may find it does not actually undertake “real economic activity.” MIM’s name features heavily in documents submitted to the court by the Hacienda investigators.

Buckley says the optics do not look good for the four-time Ballon d’Or winner: “As he is such a global figure, there is a debate around whether it is about interpretation rather than deliberate fraud. But the use of brass plate companies in BVI and Ireland makes it look like they were very deliberately trying to put his earnings out of the reach of tax authorities in any jurisdiction.”

Barcelona star Lionel Messi and his father Jorge were found guilty of tax fraud in July 2016 after it was found they had hidden image-rights income from the Spanish authorities. Messi was fined €3.6m and sentenced to 21 months in prison (which was suspended) for defrauding €4.1m between 2007-09.

Spain’s supreme court upheld the sentences in May 2017. The Messi family had previously paid over at least €10m in back taxes and charges, long before their case made it to court.

“With Messi, there was a total failure to fill his tax obligations [on image rights income], whereas with Ronaldo the argument is more technical,” Sanchez says. “On the other hand, the sums involved in Ronaldo’s case are almost four times higher than those attributed to Messi. So while there are differences, there are also big similarities, so much so that the prosecutors have used the Supreme Court judgement against Messi to support their case against Ronaldo.”

Q. What about other Jorge Mendes clients who are in trouble?

Many other Gestifute clients who have spent time in La Liga, including Jose Mourinho, Fabio Coentrao, Pepe, Angel Di Maria and Radamel Falcao, have had questions raised about their use of offshore companies to manage image-rights income — such as Dublin-based MIM and Polaris.

Mendes himself is not under investigation but was called as a witness in judge Gomez Ferrer’s court on June 27, in a case where investigators claim Falcao did not declare €5.6m of image-rights income when he was at Atletico Madrid from 2012-13.

Mendes told the court that he had a personal ownership stake in Polaris but that neither he, nor any of his staff, have any involvement whatsoever in tax issues, rather they deal solely with contract negotiations and sponsorship agreements.

“The Supreme Court’s judgement in the Messi case found it ‘difficult to understand’ how his tax and financial advisors could have not been accused neither by the public prosecutor nor by the state attorney as it has been evidenced that they advised the player on how to evade taxes,” Sanchez says.

Q. What about the British angle?

Gestifute and Ronaldo’s lawyers at Baker & McKenzie have both maintained that Ronaldo has kept the same tax structure accepted by the British authorities HMRC when he was at Manchester United, and therefore the issue with Hacienda is merely a misunderstanding.

However, Sanchez says the documents submitted to the court by the prosecution might not back up that stance: “It has been shown that the current structure was created when Cristiano moved to Spain, and did not exist previously.”

Q. What about Ronaldo’s reaction?

Reports say that Ronaldo does not intend to make any advanced payment or accept any wrongdoing ahead of his court appearance. Although sources close to the player have started to soften his initial stance toward definitely leaving Spain, there is no indication yet that he will follow the example set by Messi (and Di Maria and Coentrao) and just pay whatever the Hacienda prosecutors ask.

“If a client of mine were in a similar situation I would advise them to face up to the situation, accept the fine, try and minimise the situation, and move on,” Buckley says. “Messi has more or less managed that. The risk here is that Ronaldo’s strategy backfires, and people want to see him pay up, at least a fine, or perhaps more.”

Q. Could Ronaldo go to jail?

Should Ronaldo admit to wrongdoing in court and hand over back taxes, interest and fines of approximately €50m, his offence would likely drop down the scale from “aggravated” to “general.”

A guilty verdict for an aggravated tax crime means a mandatory jail time of two to six years, while conviction of the lesser offence brings a suspended sentence.

“Prison is a completely real possibility,” Sanchez says. “If Cristiano admits to the details in front of the judge within two months after being accused, and pays over the amounts allegedly defrauded, his punishment could be reduced. This regularisation of the situation would probably be the most sensible way of starting the proceedings.”