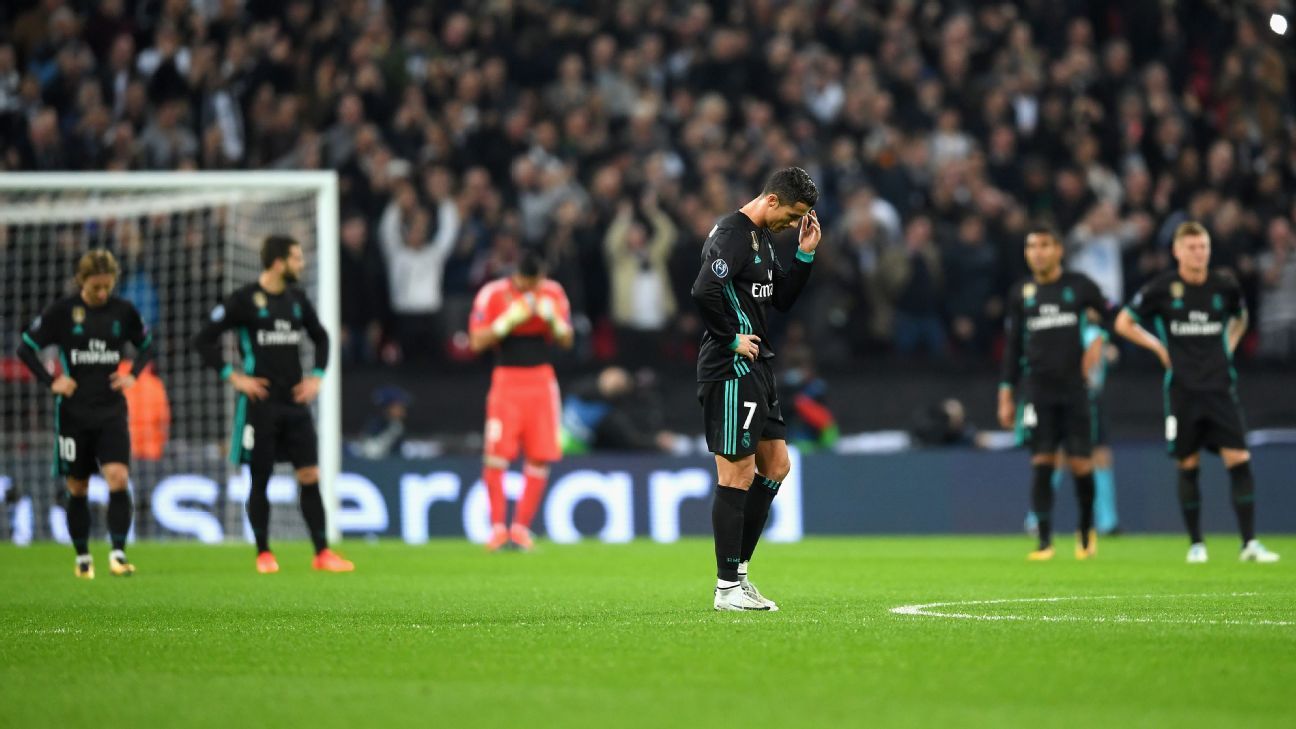 
For the second Real Madrid game in a row, “olé” rang round the stadium. First at Montilivi, then Wembley. And the poor players embarked on a futile pursuit of the ball, never quite getting there, always arriving a moment too late, watching it whisked away from them, forced to draw breath and, stung, keep on chasing.

But the poor players, who knew that the cause was lost and that the game was too, weren’t Madrid’s opponents. Not this time. This time they were Madrid’s own. On the plane back from last Saturday’s defeat at Girona, Sergio Ramos sat in the row behind his manager. The atmosphere on board “wasn’t nice,” he admitted. In front of him, Zinedine Zidane was watching the game again and it didn’t make for good viewing.

Three days later, Madrid’s manager was first onto the team bus as it parked in the tunnel underneath Wembley. He sat alone, watching the match over and that wasn’t nice, either: another day, another defeat. Sitting there he sought an explanation and insisted that he knew where he would find one, but there could be no excuse.

“You have to accept it”, Zidane said. At Madrid defeat is never acceptable, though, still less two of them in a row. “It was a hard to defeat [to take] but it was deserved too.” The good news came from Germany where Borussia Dortmund had drawn with Apoel again. The defeat to Tottenham would not be so damaging; Madrid will probably not finish top of their group but they should still go through, claiming a chance to start again.

The defeat to Girona three days earlier might be worse, though; Madrid are eight points behind Barcelona at the top of the table. “It wouldn’t be the first time that an eight-point lead has been overcome; I’ve done it before,” Ramos insisted, but it would and he has not: Madrid have never overcome a deficit so large to win a league title.

The impact was not just mathematical, even though the statistics were stark, it was that Madrid had been beaten and the way they had been beaten. It was the words used to describe it: Like a film poster in reverse, a long list of adjectives, none of them good: freefall, crisis, collapse, disaster, nightmare. Madrid’s darkest night, one Spanish paper called it. Marca’s headline said: “All the alarm bells are going off.”

They have been beaten twice already in La Liga, even though they have only played one of the top nine; it took 17 games fewer than last season to suffer a second defeat. Cristiano Ronaldo has just one goal, as does Karim Benzema, the worst start to a league campaign for either one of them. Madrid are eight points behind Barcelona and eight points ahead of Girona, who are 12th: The bottom half is as close as the top for Zidane and his players.

The European and Spanish Champions, World Champions, European and Spanish Super Cup holders are in “crisis.” Or so some say. It’s the kind of crisis most clubs would love, but Madrid are not most clubs. They’re the team who did not just reach the summit when they won the Champions League in Cardiff last June, but promised that this was just the start of a dynasty. And almost everyone believed them. Manchester United, Juventus and Barcelona could testify to it; Gerard Piqué said that, for the first time, he felt inferior to Madrid.

But, five months on, here they are, eight points behind Piqué and his Barca teammates. Europe was supposed to be the place Madrid sought refuge, the competition that defines them, but it hasn’t happened. At home, Spurs had held them; on a first trip to Wembley they had been beaten. It wasn’t close. Marcelo gave the ball away 29 times. Toni Kroos gave it away 40 times. 40! It finished 3-1. Dele Alli got two goals; “I was close to getting three,” he said.

Madrid have won 66 percent of their games in 2017-18. Which is hardly horrible but, at this stage last season, they won 75 percent and that wasn’t their best start either, although they had not been beaten. They had scored 11 goals, despite having played three games fewer. The number of chances they allow has almost doubled.

There hasn’t been much in the way of football. If early draws against Levante and Valencia did not seem so bad, just a little unlucky, and if defeat against Betis might have felt like a fluke, wins in Getafe and Vitoria did not convince. Defeat in Girona meant it no longer felt like chance, something that could just be brushed off.

“We have to play better,” Casemiro said but, four days later, they didn’t. Slow and lacking intensity, they committed just six fouls vs. Spurs. Chances were not taken, the ball was given away. It was not undeserved and it was not a one-off. Missed opportunities had been the explanation earlier in the season — and there was something in that — but that did not seem enough anymore. Bad luck also played a part just as, perhaps, good luck had before. Truth is, until the spring Madrid did not always convince last season. Mostly, they kept winning, though.

Injuries also matter: Gareth Bale, Keylor Navas, Raphael Varane and Dani Carvajal were all missing at Wembley. But across the team, only Isco has been at his best level this season. When players were missing last year it did not affect Madrid so much; perhaps, at times, it helped. And if there are questions now about the tactics and the relative simplicity of their attacking ideas — trust in talent, followed by a turn to open the pitch up and put crosses in — that was also the case then. An early start to the season may have played its part; next month they have to go to Abu Dhabi for the World Club Cup.

“It’s not physical or a mental block either,” Zidane said, but they did run a kilometre less, per player, than Spurs. Afterward, Ronaldo offered up his analysis. He was calm, rational, but the conclusion was clear and it was more structural and very simple: players. “Pepe, [Alvaro] Morata and James [Rodriguez]made us stronger,” he said. All three have left. There was “more experience” last season, Ronaldo added; the squad was not necessarily better but it was older.

Experience is often overrated but James provided more assists than anyone, Morata more goals than anyone other than Ronaldo. From the bench, games could be won and games could be saved. When Morata went — he and James wanted to walk away — Zidane admitted that he was a striker short. He had hoped that space would be occupied by Kylian Mbappé. It wasn’t. It wasn’t occupied by anyone.

Places are still occupied by brilliant players. “Who won the Champions League two years in a row? Real Madrid,” said Ronaldo and he was right. It was these players and there is time, certainly in Europe. Last season they were second in their group behind Dortmund and won the title. Ronaldo reached the quarterfinals with only two goals; he finished the competition as top scorer with 12.

They lost two in a row against Sevilla and Celta Vigo in January, then went on a run that saw them claim a first European and Spanish league double in 59 years. It is true, though, that they did not have so much ground to make up as they do now.

“It’s not the end of the world,” Marcelo said. “Let’s not make a drama of this.” His manager will not: Zidane is under pressure now and the headlines screamed at him, just as the way his team played must have done, but he will not make it worse by desperately seeking some catch-all solution, making erratic changes, ripping up everything.

He watched the game back seeking remedies but they will not be drastic, the medicine worse than the illness. Madrid, where a drama is made from a crisis that is declared from very little, are in calmer hands. Which is not to say Zidane will necessarily find the solution or that it will present itself, but it does suggest that more upheaval will not be added. “We have to hang on in there until we can change the ‘chip,'” he said.

“It’s not so bad,” Ronaldo said. “It’s the end that counts, not the start.” Last season he was the very embodiment of that, starting slowly but tearing through April and May.

“People can be pessimistic after that result but Madrid always come back,” Ramos said. “Those who give us up for dead get put in their place with time. Real Madrid will be back and very soon.”