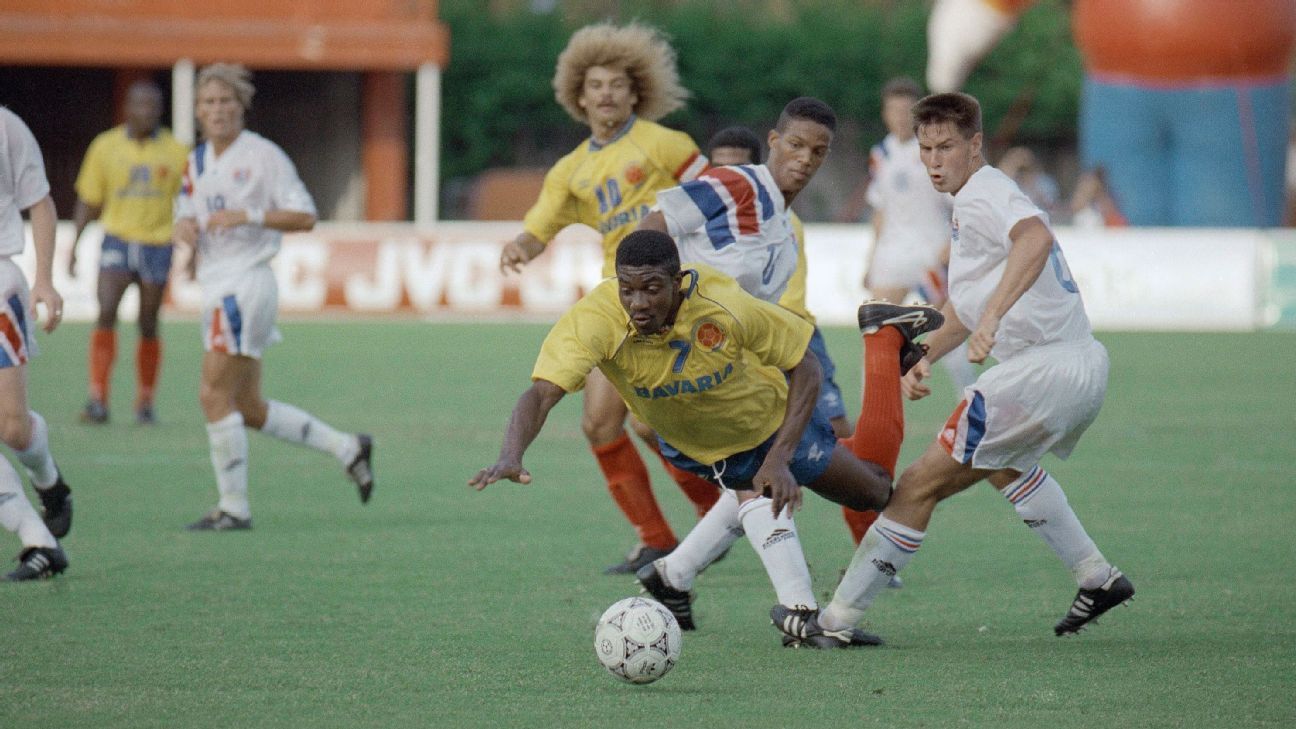 
You might have heard Colombian star James Rodriguez is a Bayern Munich player.

In fact, Bayern’s social media team tweeted young James expressing his pride at being the first Colombian ever to play for the club, before quickly backtracking, deleting that erroneous tweet, instead quickly offering the consolation their new signing was more than happy to be the second.

So, who is that first Colombia international to pull on the Bayern shirt?

Well, Adolfo Valencia is also remembered quite fondly in these parts, although he attained far from legend status. Indeed, there was a lot of slapstick in his season and a bit at Bayern. You have to remember, though — this was a very different Bayern setup when Valencia arrived from Independiente Sante Fe in 1993. Despite the presence of Lothar Matthaus, this was a team in transition that hadn’t won a trophy at all for three years when “El Tren” came steaming into Bavaria.

Aged 25 at the time, Adolfo arrived boasting the promising nickname of “The Train” and he had the impressive physical stature to match. Unfortunately, this tag also suggested a certain level of speed, which was never really apparent to Bayern fans. Caretaker manager Franz Beckenbauer soon dubbed him “Entlauber” — the defoliator — as his wayward shooting tended to threaten trees more than the gaping goal.

Recalling Beckenbauer’s teasing jibe, Valencia told kicker in an interview: “I’m not angry with him, only grateful. He’s one of the greats of the world game and led us to the title. He’s allowed to say that.”

James will be evidently more graceful than big Adolfo. He was popular among his teammates, but despite sound heading ability, the rangy and robust striker was derided in many quarters and was often a figure of fun. His first touch let him down and in all probability, Valencia would easily make the running in any poll for the worst 10 Bayern strikers in history.

At first glance, though, he possessed a decent record of 11 league goals in 25 games in his debut season — finishing joint top scorer with legend Mehmet Scholl and helping Bayern to win their first Bundesliga in four seasons. How times change …

He scored twice during a famous league debut in the Olympic Stadium against Freiburg. Robert Lewandowski would presumably swap those goals against the Breisgauer …

He was up front as minnows Norwich City became the first English team to beat Bayern in Munich in the 1993-94 UEFA Cup. However, even Valencia’s early goal at Carrow Road couldn’t prevent Bayern from an embarrassingly early exit to the Canaries. If Bayern were derailed, the sluggish Train, rightly or wrongly, tended to bear the brunt of the abuse.

The following season, with new signing Oliver Kahn in goal, Valencia was part of a Bayern side dumped out of the DFB Pokal by Franconian amateurs TSV Vestenbergsgreuth — perhaps the biggest cup shock ever.

He made just a single league appearance against Borussia Monchengladach, hooked off before the hour mark before being jettisoned by then General Manager Uli Hoeness to Atletico Madrid. In Spain, Valencia fell victim to volatile owner Jesus Gil for his performances, or lack of them.

However, he was a real thorn in the side of the United States, scoring three times in successive years for Colombia against USMNT in the 1990s — including on his debut in 1992 and at the 1994 World Cup, later breaking scoring records for the New York Metro Stars in MLS football.

He was still going strong at the 1998 World Cup, but played his last ever game for his country against England as a second half sub, as Colombia didn’t really threaten to retrieve Glenn Hoddle’s side’s two-goal lead.

Valencia, 49, runs a football academy in Bogota, aptly named “El Tren,” and said last year: “My impression is, when people discuss me they forget the good stuff.”

Certainly, this was also the case with Bayern’s own social media department briefly on Wednesday …