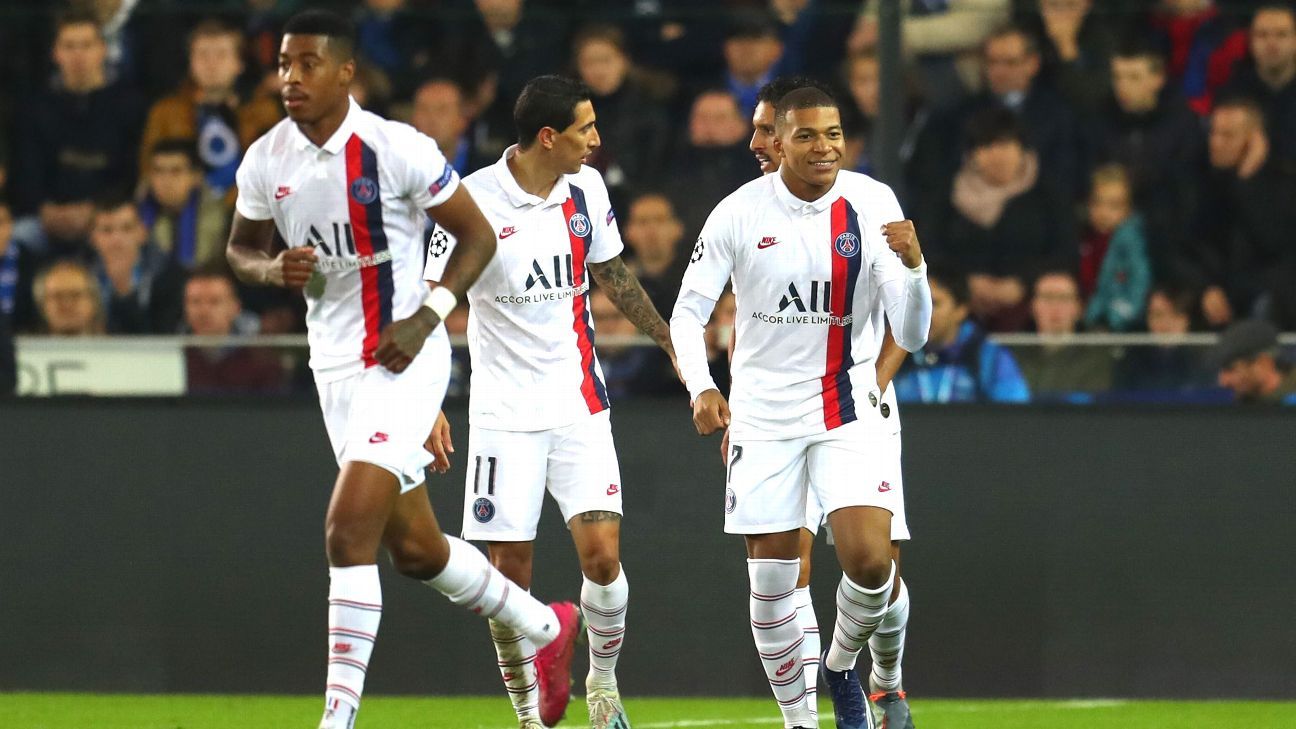 Kylian Mbappe came off the bench to score a second half hat-trick and inspire Paris Saint-Germain to a commanding 5-0 victory at Club Brugge in the Champions League on Wednesday.

The win kept up their 100% record in Group A with the French team on nine points at the halfway mark and on the cusp of qualification for the next phase, a comfortable five points ahead of second placed Real Madrid.

Mbappe became the fifth youngest player with a hat trick in Champions League history at 20 years, 306 days and the fourth substitute to score three goals in a UCL game. With his first goal, the France international also became the youngest player to score 15 career UEFA Champions League goals, eclipsing the record set by Barcelona star Lionel Messi. Messi was 21 years and 289 days old when he scored his 15th UCL goal in a 4-0 quarterfinal first leg win over Bayern Munich in April 2009.

Mauro Icardi put PSG into a seventh minute lead but it was only after World Cup winner Mbappe, working his way back after a hamstring injury, came on early in the second half that they clicked into gear.

“I wanted to start. I thought I would start. The coach chose otherwise, which I had to accept. I wanted to show it it is difficult to do without me,” Mbappe said. “When I was not there, the others did well. Football is a passion and to go without playing for two months was painful. I want to play every match and score goals.

“My injury is now gone, so I thank the medical staff. This was not a win for Kylian, but a win for PSG.”

PSG’s opener was simply done with a long ball over the top from skipper Thiago Silva to find Angel di Maria, who in turn slipped a square pass for his fellow Argentine to convert.

Mbappe came on shortly after half-time and within nine minutes had PSG further ahead.

His quick footwork set up Di Maria for a square pass that Brugge goalkeeper Simon Mignolet got a hand to, serving only to pop it up in the air for a quick-thinking Mbappe to head back over him and into the net.

Mbappe then set up the third for Icardi two minutes later after a defensive slip.

Di Maria was again the provider as Mbappe made it 4-0 in the 79th minute and then completed the quickest hat trick by a substitute in Champions League history four minutes later.

On both occasions it was the pace of the 20-year-old in carving his way past the Brugge defence and his deft finishing that underlined his prowess.

Club Brugge have two points from their three group games and go to Paris for their next Champions League match on Nov. 6.