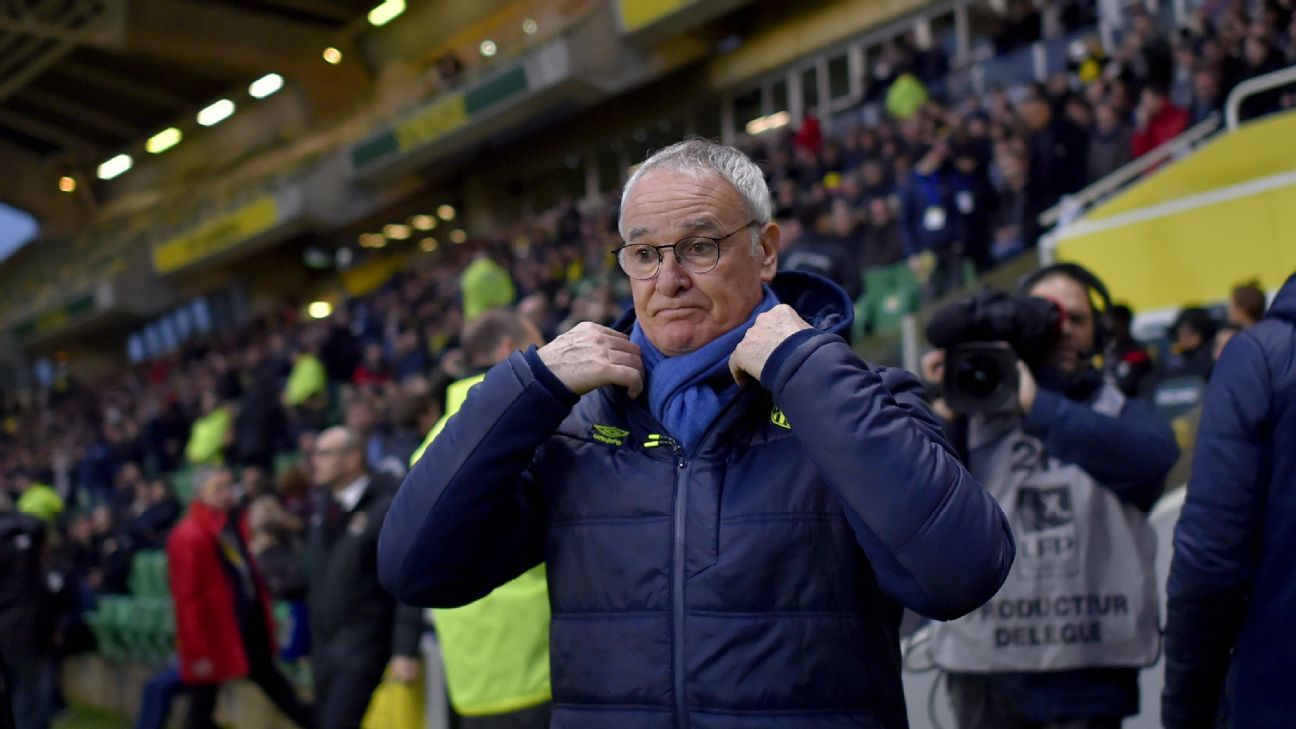 
A few weeks ago, young Nantes defender Enock Kwateng was asked to explain on French television how manager Claudio Ranieri had made the team defend so well this season.

“At training, he tells us that the goal is like our girlfriend,” Kwateng revealed. “We have to protect it like we would protect her in real life!”

Publicly, Ranieri came up with another metaphor himself to highlight the defensive prowess of his players — who have the third best defensive record (18) in Ligue 1, behind Montpellier (13) and PSG (14) — comparing his defence to a house. “First, you need to lock the door of the house,” he said. “If you don’t, the robbers get in and they take everything. Once you have locked the door, then you can organise and decorate the house the way you want.”

The former Monaco and Leicester manager has been a breath of fresh air since his return to France in June: he is funny, engaging, interesting; he loves a joke and is clearly enjoying his time in Ligue 1.

His sending off on Sunday in the 1-0 win over against Angers — only the second in his 1,019 game career, with the first coming for Inter at Napoli back in 2011 — was quite something. He touched the head of the fourth official to show him what an Angers player had done to one of his men, but was contrite after the game: “I deserved to be sent off. I shouldn’t have touched his head. I just wanted to show him [the official] how I saw the foul. But I’m sorry and I apologise.”

That incident aside, the Italian has probably been the best manager in Ligue 1 so far in this campaign. Nantes chairman Waldemar Kita compared him to a Mercedes — while also stating the previous managers were more like a Citroen — and the club are challenging for a spot in Europe this season as they sit in fifth place.

Ranieri methods are the same ones he built history’s most unlikely Premier League title success with Leicester upon: the solid defence; the one-goal difference victories. He doesn’t have the same calibre of players — a Jamie Vardy, N’golo Kante or Riyad Mahrez and that’s why he is not going to win the league — but the same recipe with slightly different ingredients is working.

Les Canaris have already won nine times by just one goal this season. They are assured to finish the year fifth in the table, whatever happens on Wednesday away at Amiens in the last game before the winter break. It is the club’s best position at Christmas since 2000, when they were fifth as well, and since they were promoted back to the top flight in 2013, their average position at the end of December has been 11th.

Through their history, Nantes have always been known for their great style of football. But they also had some very good players through the years, mainly from their academy which used to be one of the best in the country with the likes of Mickael Landreau and Jeremy Toulalan following in the footsteps of old boys Marcel Desailly, Didier Deschamps, Christian Karembeu and Claude Makelele.

Sadly, Nantes’ academy is no longer what it was, so Ranieri has had to do what he can with what he has. Yet somehow, he has worked his defensive magic. It’s not pretty but it’s very effective.

Ranieri has done more than just make Nantes a solid defensive machine, though. Great managers also improve their players and striker Emiliano Sala has now been involved in six of the last eight goals scored by the team (four goals and two assists); Leo Dubois has been excellent at right-back; Koffi Djidji and Abdoulaye Toure have been better than last year too.

Nantes will hope to strengthen the squad in January as well. The objective for the club was to do better than last season when Sergio Conceicao rescued them in December to take them to seventh at the end of the season and, despite his successes with Leicester, not many believed Ranieri could replace the Portuguese and do better.

However, the style may be different but the results are there. Nantes have locked up their house but are yet to decorate it. If they can build on their solid foundations in the first half of 2018, Ranieri may have a chance to showcase his talents on the European stage once more.