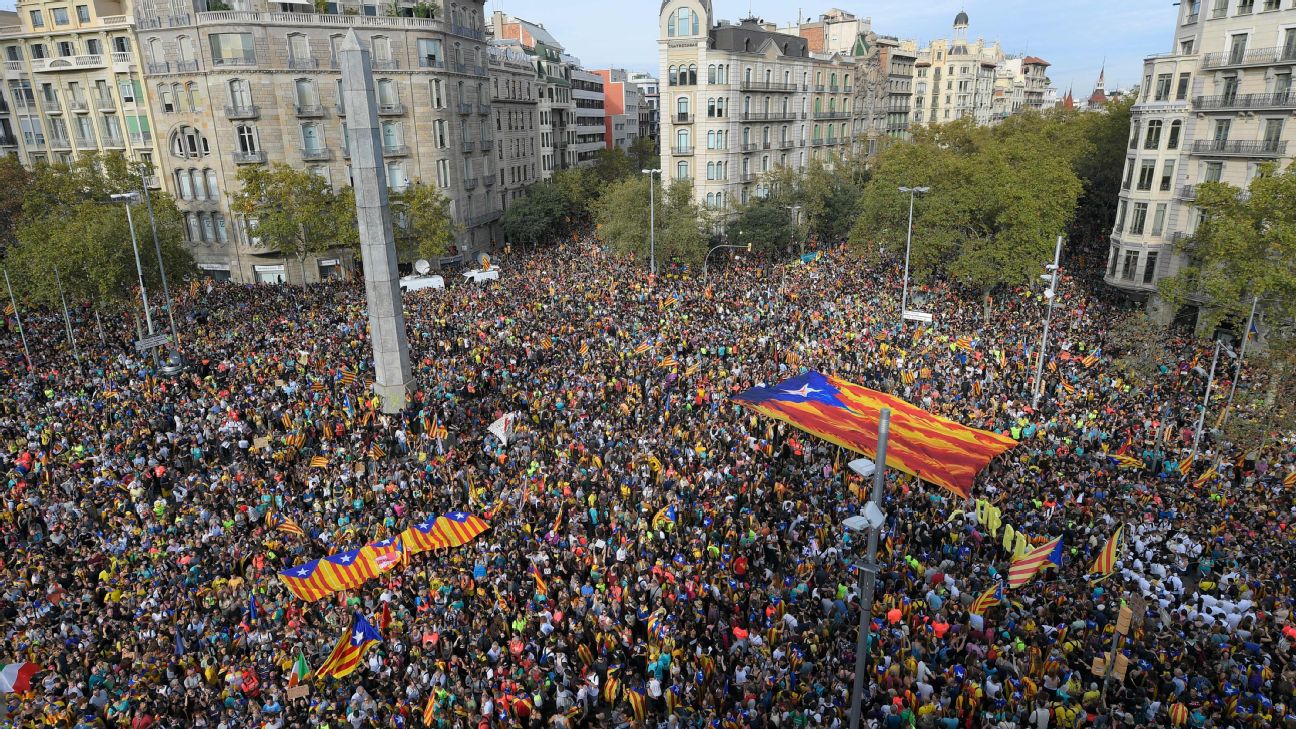 
The news came through while Lionel Messi was collecting his sixth Golden Shoe. In one corner of a side room at the old Damm beer factory in Barcelona, a small group gathered, wondering what would happen next and what they were going to do about it: Barcelona staff, directors and president. Through the door, Messi and his teammates Luis Suarez and Jordi Alba probably hadn’t heard yet, but soon they would. The league had just written to the federation to get them to switch the clasicos around. In ten days’ time, they wouldn’t play Real Madrid at the Camp Nou, after all. They would play them at the Santiago Bernabeu instead.

That was the proposal, at least. As it turns out, they won’t be playing at all. Not until Dec. 18, according to the clubs’ proposal, some seven weeks on. Assuming it’s even clear to play then. Just when an agreement had been met, the clubs finding a solution between themselves, the league challenged it, harmony broken again.

How did we get here?

“It doesn’t make any sense,” someone said in that corner when that first proposal came through. Switch the clasicos? At this late stage? Don’t be daft. The draw was made already, the fixtures set (well, as much as fixtures in Spain are ever set). How could you switch the games around? There was no way Barcelona were going to accept that. As it turned out, there was no way Madrid would either. At that early stage, there were smiles in that corner, like this wasn’t really something to be taken that seriously. Why wouldn’t they just play the clásico as planned, on Oct. 26 at 1 p.m. local time, they wondered.

That same night came part of the answer, if not all of it: a third night of disturbances followed, with confrontations and fires on the streets of Barcelona. Rubber bullets were fired. Outside the Damm factory, as those Barcelona directors discussed it, some roads had been blocked. Parts of the main train station were fenced off, the police presence heavy. There were demonstrations. The day before, Ivan Rakitic had been among those who had landed at the airport to find huge crowds, protests and police; some had been stuck inside, some outside. Transport was at a standstill, people and cars unable to reach the terminal building. A photo emerged of Rakitic walking down a slip road, wheeling his case behind him.

Sport is endlessly told not to interfere with politics, with athletes warned to stay in their lane, as if being a footballer makes you less of a citizen; less is said about politics interfering with sport.

On Monday, Spain’s Supreme Court had sentenced nine Catalan political leaders to jail sentences ranging from nine to 11 years for their part in a referendum on Catalan independence that was declared illegal, and in the failed push towards independence. Protests followed, as they were always likely to. Barcelona’s statement, released immediately after the judgement, said prison was not the solution. Don’t mix politics and sport, many responded; some were disgusted Barcelona had done so. But Gerard Piqué declared himself proud of his club. Pep Guardiola and Xavi Hernández were among those speaking out. Barcelona cancelled all official club events.

The clásico was coming up. Not the next game — Barca visit Eibar on Sunday — but the next home game. And not any game, the clásico: Spain’s showcase match, the biggest club match on the planet, moved to 1 p.m. in the afternoon to reach as many homes in global TV markets as possible, to show off what’s best about the country and its football.

– Marcotti: Soccer will always be about more than sport
– Williams: Arsenal used to be ‘Invincible.’ What went wrong?
– O’Hanlon: Why Kante is one of the world’s best midfielders

The clásico is already perhaps the most politically charged fixture in club football, held in a stadium where there are already political messages; where there are chants for independence in the 17th minute and 14th second of both halves; where the game against Las Palmas had been played without fans following clashes in the wake of that referendum on Oct. 1, 2017; where a huge banner had been unfolded numerous times claiming that only dictatorships jail political leaders. Now, the court had ruled they should be imprisoned.

Before one clásico a few years ago, a Spanish newspaper had led with the headline “Only Football?” They knew it was never only football. This time, it would be so much more given the context. Next Saturday’s clásico could have proven to be even bigger than those other moments, the accompanying noise louder than ever before.

That was one of the things, Javier Tebas, the president of the league, was worried about. Politically right-wing, a member of the Fuerza Nueva when he was young — he’s aligned to VOX now — Tebas has spoken often of Spanish football playing a role of a sport in service of the nation. He talks often about Marca Espana, “Brand Spain” — football as ambassador for the nation. In the midst of this climate, the clásico, the most-watched game of all, might become a scene of protest, a platform for independence, a loudspeaker for the Catalan cause and one they would seize upon — an image sent around the world. The league didn’t want that; nor did the Spanish government.

Above all there were safety concerns, the league said. Their request to move the game had cited “exceptional circumstances beyond our control.” A demonstration had been called for the day of the clásico, Oct. 26. Roads would be blocked, the police presence would be heavy, resources already stretched. Could the stadium cope? Could the city? Real Madrid would travel there not just for the game but the night before. Their supporters would be there too. Not many, admittedly — there never are for the clásico, sadly — but some would, as would football fans from around the world excited for a once-in-a-lifetime experience. Those who were planning to travel might be unsafe, inconvenienced. Instead, they are going to miss out. Barcelona will return the cost of match tickets, but trains, planes and hotels are another matter.

A union representative from the Barcelona police, the Mossos, said he thought security could be guaranteed. The city mayor considered it better to maintain normality. Other sporting events are going ahead this weekend; others have gone ahead in the past in extremely trying circumstances. The interior minister, Fernando Grande-Marlaska, denied asking the game to be postponed, saying that as far as safety was concerned, the game could go ahead. Barcelona manager Ernesto Valverde called it “an opportunity, a chance to show that we can play on despite the doomsayers.” Barcelona expressed their “total confidence in the civil and pacific attitude of our fans, who always express themselves in an exemplary way at the Camp Nou.”

Which, depending on your point of view, is debatable. But, anyway, was it worth the risk, any risk? The situation wasn’t normal.

The league’s request was sent on to the federation, who put it in the hands of the competition committee. The committee, made up of three people — one from the league, one from the federation, one independent — rejected the switch idea, but they did want a solution and they didn’t want to play it at the Camp Nou next Saturday. Informal conversations were held, and they gave the clubs until Monday to respond in writing, which they both did sooner. The decision would be the committee’s, everyone said, only that ended up not being the case: the committee passed it back again. Madrid and Barcelona would decide.

On Friday morning, it was officially announced that the clásico had been postponed. It would not be played on Oct. 26. The clubs were given until Monday at 10 a.m. local time to agree on a new, alternative date. If they could not, the committee would decide. Real manager Zinedine Zidane still didn’t know what was happening when he sat before the media. “We’ll play when they tell us to,” he said.

There was no really good solution, and so everyone waited for the least bad one. It’s not easy. The clubs’ initial preference, and that of the federation (and thus the likely outcome), is to play at the Camp Nou on Wednesday, Dec. 18.

The league was not happy. That meant playing on a Wednesday, a workday, which in turn meant not playing at 1 p.m local time. TV audiences would drop, at least in theory and internationally, that was true. Deals had been signed on certain premises that might not now be met. The league had chosen kick-off times carefully for viewers outside Spain, earmarking one clásico for Asia in terms of timing and one for America: in Tebas’ eyes, it would be Marca España reaching both sides of the globe. This was Asia’s, but not anymore. Playing on Dec. 18 would mean Asia not getting their clásico, Brand Spain not heading east. (Brand Catalonia not doing so either.)

The league pushed for Saturday, Dec. 7, instead, which would have meant rescheduling Barcelona vs. Mallorca and Madrid vs. Espanyol, the fixtures originally set for that weekend and therefore solving one problem by turning it into two.

But then, on Friday afternoon, Madrid announced that they and Barcelona had reached an agreement for Dec. 18 that should,