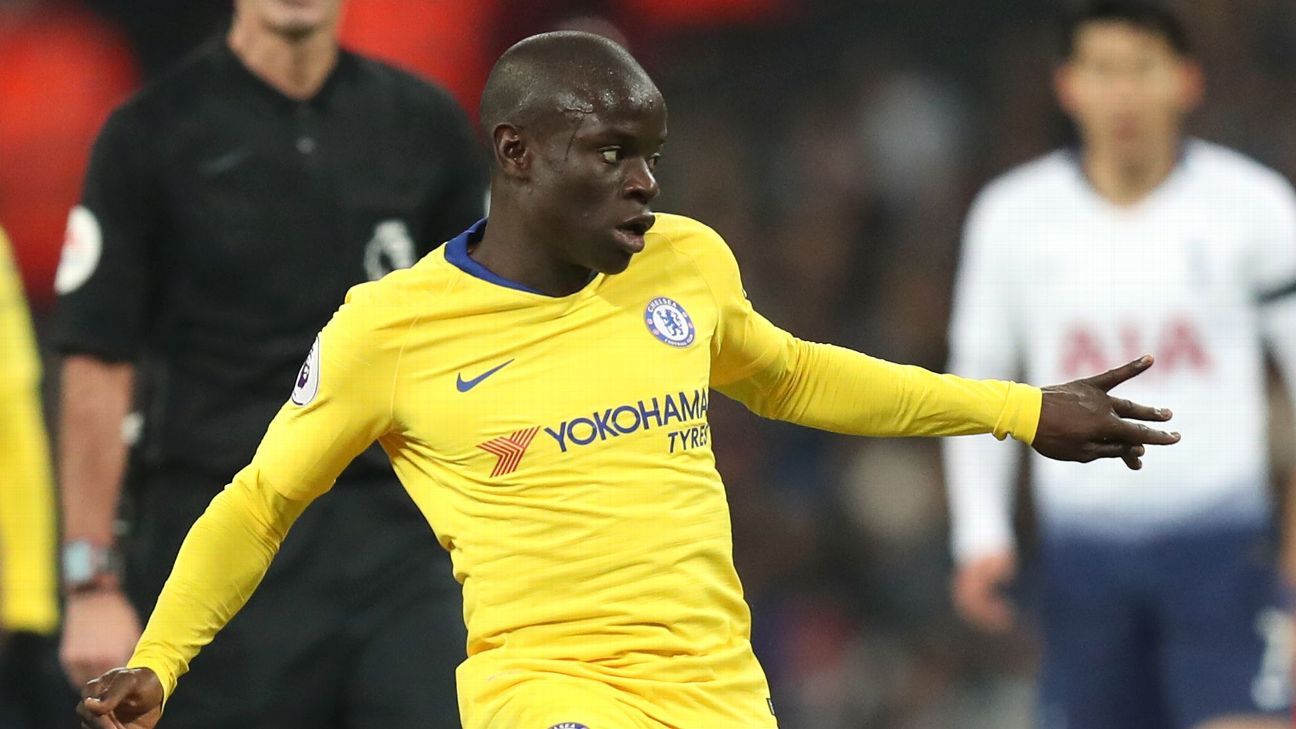 
LONDON — Maurizio Sarri has said he will not reconsider N’Golo Kante’s position in Chelsea’s midfield but criticised the France international for losing his discipline in Saturday’s 3-1 defeat by Tottenham.

The debate over Kante’s role under Sarri intensified after the Spurs defeat, with many suggesting that Chelsea will never be defensively solid as long as Jorginho operates at the base of midfield in place of the ex-Leicester man.

Kante’s rate of tackles and interceptions have plummeted this season as he operates higher up the pitch in Sarri’s 4-3-3 system, but Sarri said that Chelsea’s midfield problems against Tottenham were not rooted in tactics.

“I think, as you know, I want to play a central midfielder as a very technical player — Jorginho or [Cesc] Fabregas,” the ex-Napoli boss said. “I don’t want Kante in this position.

“And I think this is not one of the best characteristics of Kante, but it was only a reaction to the difficulties [of the team].”

Sarri also hinted it may be possible that Kante — who last week signed a new five-year contract making him Chelsea’s highest-paid player on around £290,000-a-week — does not yet understand what his manager is asking him to do.

“Maybe. Maybe it’s only a question of time,” Sarri replied when asked if that was the case. “But Kante has to stay near to Jorginho, especially when the ball is on the other side.

“When the ball is on the left, he has to stay very close to Jorginho.”

Olivier Giroud, Kante’s teammate for club and country, has no doubt that his fellow World Cup winner will get on Sarri’s wavelength sooner rather than later.

“I think N’Golo can play every single position in midfield,” he said. “In the manager’s philosophy, how he wants us to play, Jorginho is the holding midfielder or Cesc — that’s a very important part of our game.

“Maybe in the manager’s mind, N’Golo is more efficient playing that position box to box. He can be more efficient carrying the ball, finding passes between the lines.

“Obviously we know how fast he is. When he recovers the ball, he can penetrate the lines. That’s one of his main strengths as well. It’s a good position for him.

“He maybe needs to be more selfish around the box when he has the opportunity to shoot. I’m pretty sure he will score more goals. We know it’s not his main strength, but he’s very important for us in recovering the ball. He’s everywhere.

“We don’t need to question his position. He just needs to adapt to what the manager wants.”

Sarri did not hold back in his criticism of Chelsea’s performance immediately after the Spurs loss, and he held individual meetings with his players on their return to training on Monday.

“It’s very difficult for them, I think, to tell me why [it happened],” Sarri said. “Very difficult.

“Somebody told me that, maybe, the international break was a problem. A problem to be immediately ready at 100 percent. But I don’t know.

“Maybe for Tottenham it was easier because the players of Tottenham played here in London, played on Sunday [for England]. On Monday they were all together, but the situation was similar. So, maybe, it can be true. But only for a small percentage, I think.”

Chelsea have an opportunity to respond against PAOK in the Europa League on Thursday, when a point will confirm their passage into the round of 32.

They will have to do so without Victor Moses, who Sarri revealed has picked up a back problem in training, as well as Eden Hazard, who sustained a minor ankle knock in the closing stages of the Spurs defeat.

Hazard has not scored in his last nine matches for club and country after a prolific start to the season, and Sarri said that he is concerned by the winger’s loss of rhythm heading into a crucial stretch of the season.

“I am worried because 25 days ago he had an injury, a back injury,” Sarri said. “Now the ankle.

“I think that this week is useful for him in training. Then we will see. Of course I think that he cannot play 10 matches in 30 days, so sometimes he has to rest.”