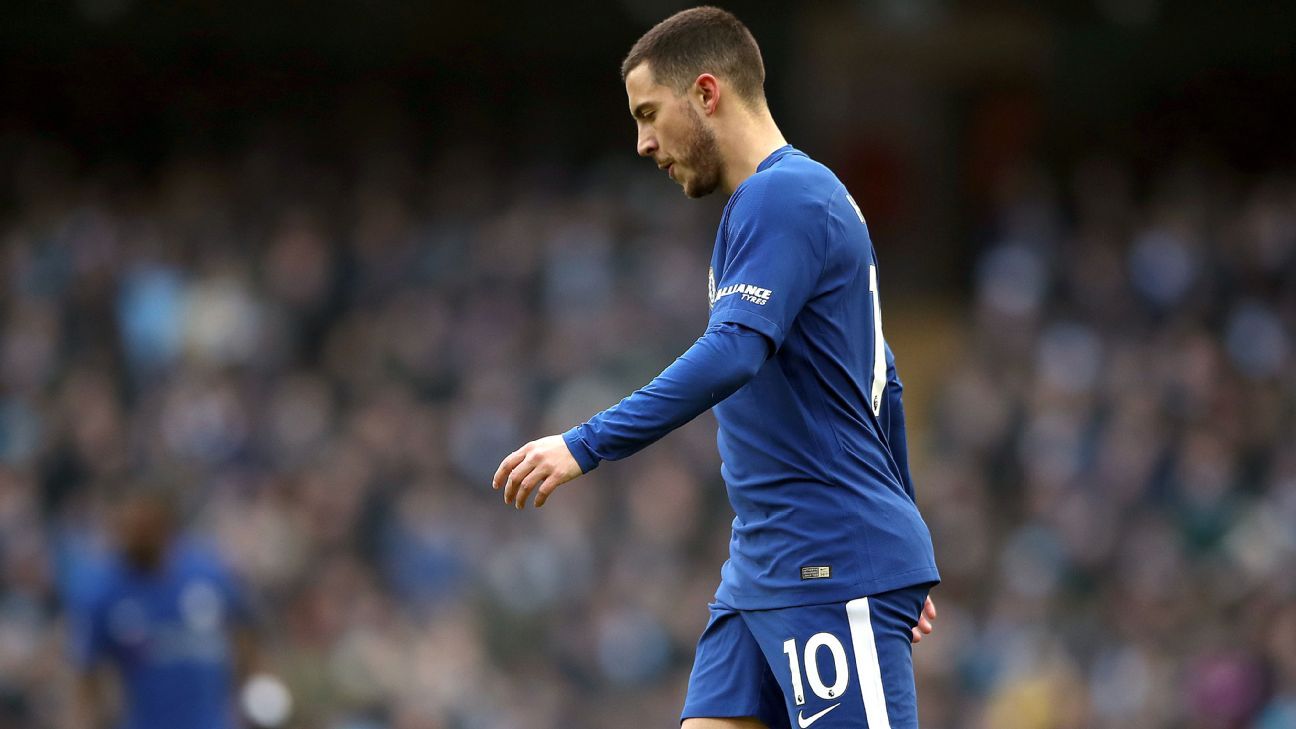 
LONDON — Eden Hazard has never looked more depressed in his Chelsea career than he did for 89 minutes at the Etihad Stadium on Sunday.

Deployed as a false nine in a false attack against a suffocating Manchester City, granted just 32 touches of the ball and forced to jump for aimless clearances that even Olivier Giroud or Alvaro Morata could not have hoped to reach, it was little surprise when the Belgian declined to even acknowledge Antonio Conte as he trudged from the pitch.

After the game Hazard displayed his usual smiling, carefree demeanour, but his words revealed his true feelings.

“When you leave the pitch you have the impression that you’ve ran, but that you haven’t played a game of football,” he said. “That’s a pity. We could have played on for three hours and I wouldn’t touch the ball.”

The fear of many Chelsea fans, and reportedly of many in the dressing room, is that Conte’s isolating game plan against elite opponents will drive Hazard into the arms of Real Madrid, the club that have always been his dream destination and finally appear ready to consummate their long-standing interest.

It certainly cannot help, but the unpleasant truth for the Chelsea board is that the flaws in their pitch to convince Hazard to spend the rest of his prime years at Stamford Bridge go significantly beyond the tactical foibles of a coach who will almost certainly be gone in three months’ time.

Chelsea will remain Premier League champions in name for at least the rest of March, but for several months they have given the impression of a team at the end of a cycle. Diego Costa’s departure and the decline of Cesc Fabregas have left Hazard to shoulder a heavier burden than ever before in a less creative, more limited side, and form has cratered as a result.

Things need not have been this way, and you suspect the extraordinary performances of Kevin De Bruyne and Mohamed Salah in particular this season will have prompted the Chelsea hierarchy to privately reflect on some of the decisions that led to this point.

Hazard certainly has; in an interview with Copa90 last month he put his head in his hands when reminded that De Bruyne was once a Chelsea teammate, and he pointedly spoke in glowing terms of his countryman when revealing his pick for PFA Player of the Year.

No balance is harder to strike at the elite level of football than the one between short-term competitiveness and the longer view. Few clubs ever find it, and even the smartest cannot preserve it for long.

That said, it has become increasingly clear that, by sacrificing two of the 10 best players in the world right now in favour of more immediate contributors, Jose Mourinho’s second spell at Stamford Bridge cost Chelsea a position of incredible strength and sustainability.

Roman Abramovich has not acquired a rising star of world-class potential since Salah in January 2014, and the hyperinflation of the transfer market makes it hard to see where the next one will come from. Mourinho and Conte’s priorities also ensured that, Andreas Christensen aside, the brightest talents of a dominant Chelsea academy team have either stagnated or departed.

All signs point to a summer rebuild with or without Hazard, but unless Chelsea finish the Premier League season like a runaway train or pull off another Champions League miracle, they will be recruiting as a Europa League club while their key domestic rivals continue to shop in the top bracket of the market.

At 27 years old, Hazard has no business spending a year of his prime in Europe’s second-tier competition, or being the sole superstar in a team trending backwards in the least forgiving league in the world. The one major club trophy missing from his career honours list is the Champions League, and Chelsea project to be fringe contenders at best over the next few years.

Abramovich’s willingness to sanction a contract extension worth more than £300,000-a-week to keep Hazard is, in itself, an implicit acknowledgment of how difficult Chelsea would find it to replace him in their current situation. Moreover, the underwhelming dealings of the past two transfer windows offer the Belgian little cause for optimism that help will arrive if he does stay.

Hazard’s purgatorial experience at the Etihad crystallised the decision he faces this summer perfectly; his fading teammates subdued and his own brilliance rendered irrelevant by more talented opponents playing a style of football that, you suspect, would allow him to take his own game to the next level.

Chelsea still hope to convince Hazard that they are capable of building a team worthy of him. With every performance that exposes the gulf in class between them and the true elite, however, the case gets a little harder to make.

Portland Thorns teen Moultrie files suit against NWSL over age restrictions
Arsenal’s Aubameyang opens up on malaria diagnosis ahead of Europa League semifinal
Switching between first and second teams not easy
Zidane on Real Madrid’s La Liga, Champions League bids: ‘We can do it’
Man City, on brink of Premier League title, are already laying down a marker for the next one