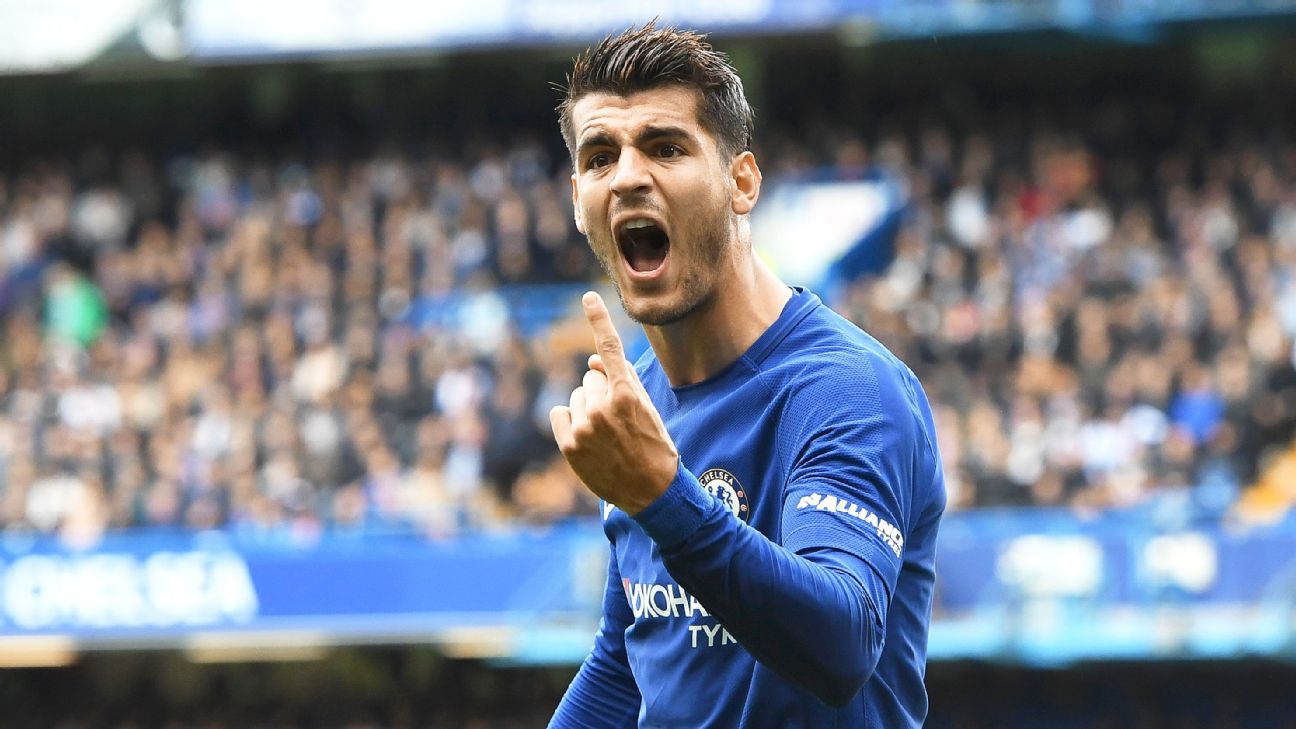 
In last weekend’s goalless draw at Stamford Bridge, something strange happened: Arsenal outmuscled and outhustled Chelsea, winning battles all over the pitch. Had they been able to combine their running with a little more cunning, Arsene Wenger’s men would have left the home of their London rivals with their first victory since October 2011.

As Chelsea searched for an explanation, many observers pointed to Diego Costa’s absence. The Spain international embodied Chelsea’s physical, ruthless and occasionally nasty streak throughout his three full seasons leading the attack. His successor, Alvaro Morata, has not exhibited quite the same fire.

Antonio Conte dismissed the idea that Morata had been bullied at times by Arsenal’s defenders. “In my opinion, Morata played a really good game,” he insisted. “I’m very happy with his performance. He had a lot of the ball and tried to send Willian, Pedro, our wing-backs [forward].

“Sometimes we are [too] focused on whether the No. 9 scores or not. If he scored, he played a good game. If he doesn’t, he didn’t have a good game — but I was happy with his performance. We see other things.”

The narrative that Morata might, for want of a better phrase, be “too nice” to fill Costa’s boots is a compelling one. But how much evidence is there to back it up?

It is true that he lost possession six times against Arsenal — more than any other Chelsea player and a tally only matched or exceeded by Costa in two Premier League matches last season. This figure, however, is mitigated by a couple of factors.

One is that, as a lone striker, his job on the day was to control passes of wildly varying quality under extreme pressure, with one or several Arsenal defenders in close proximity. The odds are rarely in a target man’s favour when his team finds itself forced to defend and clear its lines.

Another is that Morata is still adapting to what is considered a foul in England. A different level of physicality is allowed in the Premier League and there were times against Arsenal when he went down too easily — not because of a lack of strength, but because he was expecting to buy his team a free kick.

Conte put Morata on a weight gain programme as soon as the striker arrived at Cobham, and he already looks like a bulkier, more powerful figure on the pitch than the sleek substitute Real Madrid utilised to such great effect.

This physical boost has helped ensure that Morata’s aerial threat — always a notable strength — translated instantly to the Premier League. All three of his goals and both of his assists have been registered with his head and he has won 45 percent of his aerial duels. Costa triumphed in just 28.3 percent of his last season.

Everything else is a process of mutual adjustment. Morata displays more and more signs with every game that he can be the elite “reference point” Conte requires to make his attacking system work, but his Chelsea teammates must bear in mind that their new striker has a different skill set to the old one.

A hallmark of Costa’s game is his ability to bulldoze through defences with the ball at his feet. He attempted 3.8 dribbles per game on average last season, completing 41.4 percent while causing havoc and creating chances for himself. Morata, more accustomed to running off the ball, attempted just 1.5 dribbles per game at Madrid, though he was more efficient when doing so, completing 56.4 percent.

It will take time for Morata to match the level of overall decisiveness reached by Costa, whose 20 Premier League goals directly contributed to 16 extra points for Chelsea last season. He carried Conte’s team at crucial moments on their run to the title and underlined his status as one of the world’s best strikers.

In the 19 league matches until he was dropped by Conte in January, Costa scored 14 goals from 58 attempts, yielding a conversion rate of 24.1 percent. Morata achieved 27.3 percent across significantly fewer minutes for Madrid last season, and so far this term is at 18.7 percent with three goals from 16 total attempts. Scoring a few with his feet should help to bring that percentage up.

Eden Hazard’s return will also be a huge boost to Morata’s effectiveness. The Belgian winger, yet to start in the Premier League, was directly involved in 24.7 percent of Chelsea’s 85 goals in the competition last season, registering 16 goals and five assists. Less visible in those numbers is the reality that his mere presence on the pitch often creates space for his teammates.

Costa is unquestionably a difficult act to follow, and there are no guarantees that Morata will be the man to do so. But he is already doing enough to allow Conte to bat away endless questions about Costa — though that should dissipate with the announcement of his move to Atletico — and the suggestion is that we can expect plenty more to come.