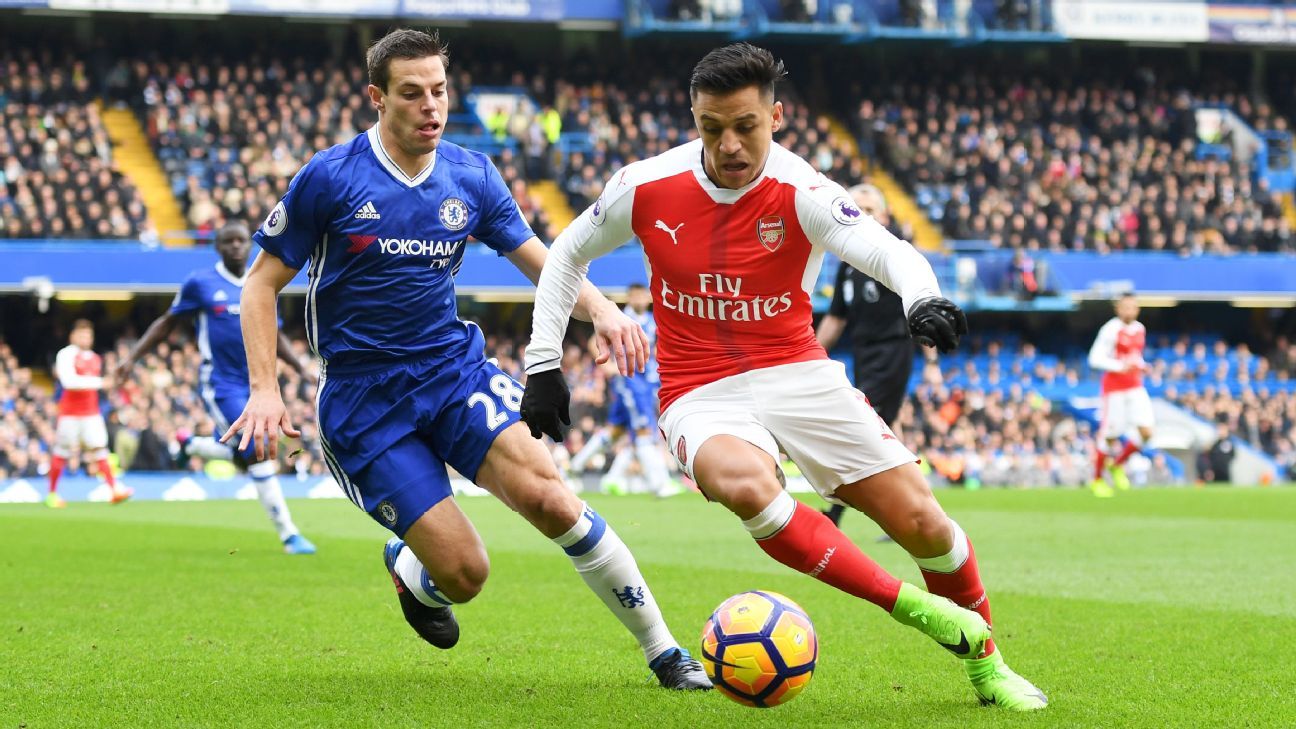 
Ahead of Chelsea’s game against Arsenal on Sunday, club correspondents Liam Twomey (Chelsea) and Mattias Karen (Arsenal) have been chatting about the teams’ rivalry.

Chelsea have dominated the Gunners at home in recent years, but Arsenal won their last two meetings at Wembley in the FA Cup final and Community Shield. So who will come out ahead this time?

MK: So, Liam, finally time for another Chelsea-Arsenal clash.

As we all know, this will actually be Arsenal’s first visit to Stamford Bridge since that famous 5-3 win in 2011. Or am I forgetting a few games since then? They say the brain can sometimes erase traumatic memories. Either way, I distinctly remember the Gunners playing Chelsea in the FA Cup final and Community Shield in recent months. And based on those games, there’s no doubt Arsenal have the upper hand in this one, right?

LT: Well, one of those games was a glorified friendly and neither were at Stamford Bridge. Talking to Chelsea players after the Qarabag game, I’d be surprised if there was any form of mental hangover from the FA Cup final, disappointing though it was for all involved. In fact, it’s more likely to act as extra motivation.

Both teams endured troubled summers and difficult starts to the season but after four straight wins it feels like Chelsea head into this match with more confidence and momentum, despite Arsenal’s impressive comeback victory over Cologne on Thursday.

MK: “Troubled summer” may be putting it mildly for Arsenal, at least if you only consider August. But they will be hopeful that back-to-back wins in the league and Europa League have turned the tide following that disastrous showing at Liverpool.

The problem for Arsene Wenger’s side is that they’re never more than one game away from a new crisis. Another away loss to a top rival would bring the doom and gloom right back and renew the sense that Arsenal’s title challenge is already over.

The Gunners desperately need a result in this game, perhaps more so than in any other recent visit to the Bridge. One can only hope that Wenger learned his lesson at Anfield and doesn’t put new signings Alexandre Lacazette and Sead Kolasinac on the bench this time. Those two bring something to this team that Arsenal haven’t had in recent visits to the Bridge — a top striker and a physical defender. Still, Chelsea probably had the better transfer window of the two, didn’t they?

LT: Chelsea definitely didn’t sign as many players as Conte wanted (and, even worse, missed out on some of his key targets). The consequences of that in terms of his relationship with the board will play out over the coming months, but on the pitch it’s already clear the players they did get over the line are good.

Alvaro Morata has three goals and two assists in four Premier League games, Tiemoue Bakayoko is looking more dynamic in midfield the fitter he gets, Antonio Rudiger is impressively assured at the back and Davide Zappacosta, it seems, can score from 30 yards without even looking at the goal. A formidable skill, I’m sure you’ll agree…

MK: Looked like a fluke to me. But did you see Kolasinac’s volley against Cologne, or the superb strike from Alexis Sanchez? Nothing lucky about those. If Sanchez keeps scoring stunners like that, fans will quickly forget about the fact he doesn’t actually want to be here.

People have been questioning his commitment and fitness in recent weeks, but he clearly hasn’t lost his ability to decide games single-handedly. A repeat of that on Sunday, and he’ll quickly be the fans’ darling once again. Do you think Chelsea have come up with a way of stopping the Chilean?

LT: Sanchez is still the big danger to Chelsea, as he was in the opening minutes of the FA Cup final, and with Hazard likely to start on the bench, he’ll be the most talented player on the pitch at Stamford Bridge.

A lot has been made of Wenger confounding Conte by playing a back three at Wembley, but I think the result had more to do with the performances of the players than anything either coach did tactically. Chelsea had just won the title and clearly allowed their intensity to drop. I can’t see Conte — or his players — allowing that to happen again. If they play like last season’s Chelsea on Sunday they should win.

MK: Well, the back three hasn’t exactly been very impressive for Arsenal this season. But Wenger is likely to stick with it for at least one more game, although it seems only a matter of time before he reverts to his normal system. The good news for Chelsea is that they may not have to deal with the impenetrable wall of Per Mertesacker this time; Wenger has been curiously reluctant to use the German despite his outstanding performance at Wembley in May.

For me, though, it’s the front three that’s crucial for Arsenal in this game. We still haven’t seen what Sanchez, Mesut Ozil and Lacazette can do together. If that trio can live up to expectations, there’s still every reason to think that this Arsenal side can be much better than last year’s. Can the same be said for Chelsea?

LT: No. Despite recent results they are a significantly lesser team without Hazard. Morata is scoring and adapting quickly, but he hasn’t yet reached the talismanic level that Costa performed at in the first half of last season and at times in the second half at Wembley.

Nemanja Matic was also a more experienced and reliable contributor than Bakayoko is at this early stage of his Chelsea career. Still, I can’t wait to find out how these two sides stack up. It should be a great game.