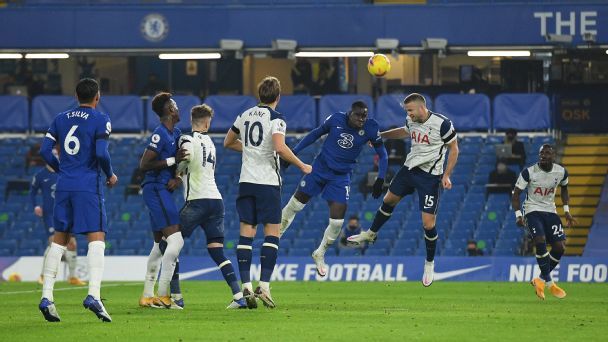 
Tottenham Hotspur held Chelsea to a goalless draw at Stamford Bridge on Sunday to go top of the Premier League on goal difference.

In a very tight affair, Spurs were happy to sit back and soak up pressure but Chelsea failed to find the breakthrough.

United States international Christian Pulisic returned from injury as a second-half substitute for Chelsea who remain in third place in the table.

Steven Bergwijn had the first chance in the opening 10 minutes after he got on the end of a swift counterattack but blazed his shot over the bar.

Timo Werner found the back of the net a minute later with a curling shot but the goal was correctly ruled out for offside.

Spurs started to take control of the first half from that moment and Serge Aurier‘s long-range shot was smartly saved by Edouard Mendy.

The first-half ended goalless as the visitors restricted Chelsea to just two shots inside the area.

Chelsea had a few opportunities to score after the hour mark but Tammy Abraham and Hakim Ziyech missed from close range.

Mason Mount almost scored in the final 10 minutes but Hugo Lloris produced a fine save down low.

In stoppage time, Chelsea substitute Olivier Giroud was unable to capitalise on a headed back-pass error by defender Joe Rodon, who was otherwise impeccable on his Spurs debut, as the striker hit a tame shot straight at his Lloris.

Then it was Tottenham’s turn to miss a chance to win when substitute Giovani Lo Celso shot over in the final seconds.

A goalless draw was perhaps no surprise since both teams have focused on tightening up their defences, with each conceding only one goal in their previous four league games after some leaky performances earlier in the season.

“Points are crucial and neither team wanted to give the other side any points,” Ben Chilwell told Sky Sports.

“We’d have loved to win the game at Stamford Bridge against our rivals but we needed to keep a clean sheet.”

Information from Reuters was included in this report.