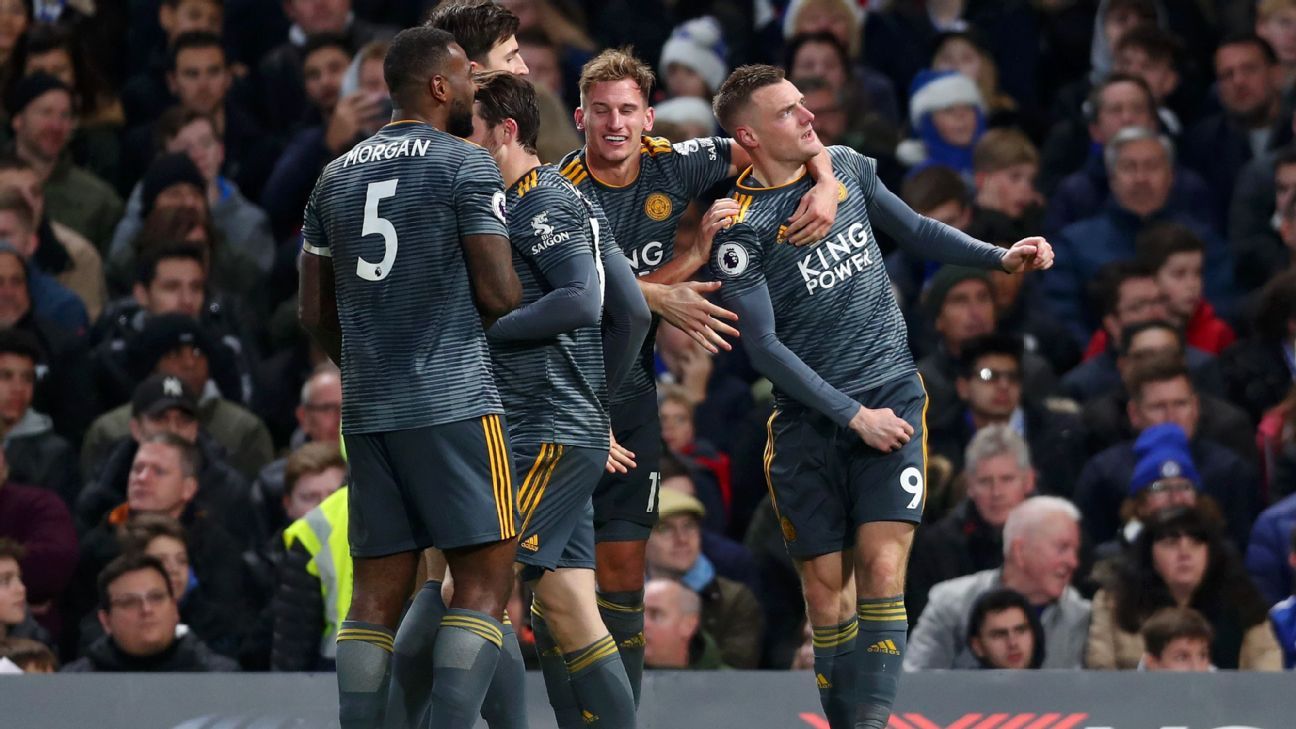 Jamie Vardy’s well-taken breakaway goal earned Leicester a 1-0 win at Chelsea on Saturday to ease the pressure on coach Claude Puel and inflict the hosts’ first home Premier League defeat of the season.

The English striker’s goal in the 51st minute earned the visitors only their second win in six league matches, while a determined defensive display kept Chelsea forward Eden Hazard at bay.

The Belgian winger, deployed in a false nine role by Chelsea coach Maurizio Sarri, came closest in a first half dominated by Chelsea, striking the crossbar with a fierce drive.

Vardy made Chelsea pay shortly after the break, finishing lethally after James Maddison slipped him through at the end of a quick counter-attack.

Hazard came close again but was denied by a brilliant Kasper Schmeichel save, while Cesar Azpilicueta’s last-ditch block stopped Vardy adding another with a clever backheel.

Chelsea almost found an equaliser in the 90th minute but Marcos Alonso hit the inside of the post and the ball rolled agonisingly across the face of goal and out.

“I think that we played very well for 55 minutes, very good football,” said Sarri. “After the goal our reaction was strange, not in the right direction, not as a team, as 11 different players.

“It was very strange. We could have reacted better. We had to continue to play like in the first part of the match. There was time to score.

“As we said from the beginning of the season, it is impossible for us to fight for the Premier League. It’s important for us to stay in the top four.”

Chelsea head the ball for long periods but without a recognised striker on the pitch they lacked a focal point and struggled to break through Leicester’s well-drilled defence.

After Vardy’s goal Sarri changed tack and threw on target man Olivier Giroud, but it was Leicester who threatened to extend their lead on multiple occasions.

“We played with confidence,” said Puel. “I was happy for Jamie to finish so clinically, fantastic [assist] from Maddison as well.

“I think this is a fantastic reward for the team because we managed this game very well. I’m happy for all the players.”

Bayern Munich face a painful rebuild after Champions League exit. Judging recent transfers, it won’t be easy
Real Madrid taking Route One to glory? Why the long ball still matters in elite soccer
Super League is only wanted by a cabal of Europe’s elite club owners. Fans have been forgotten
Arsenal struggle as Bellerin, Gabriel get 4/10 but Nketiah saves the day
I don’t know what will happen in summer