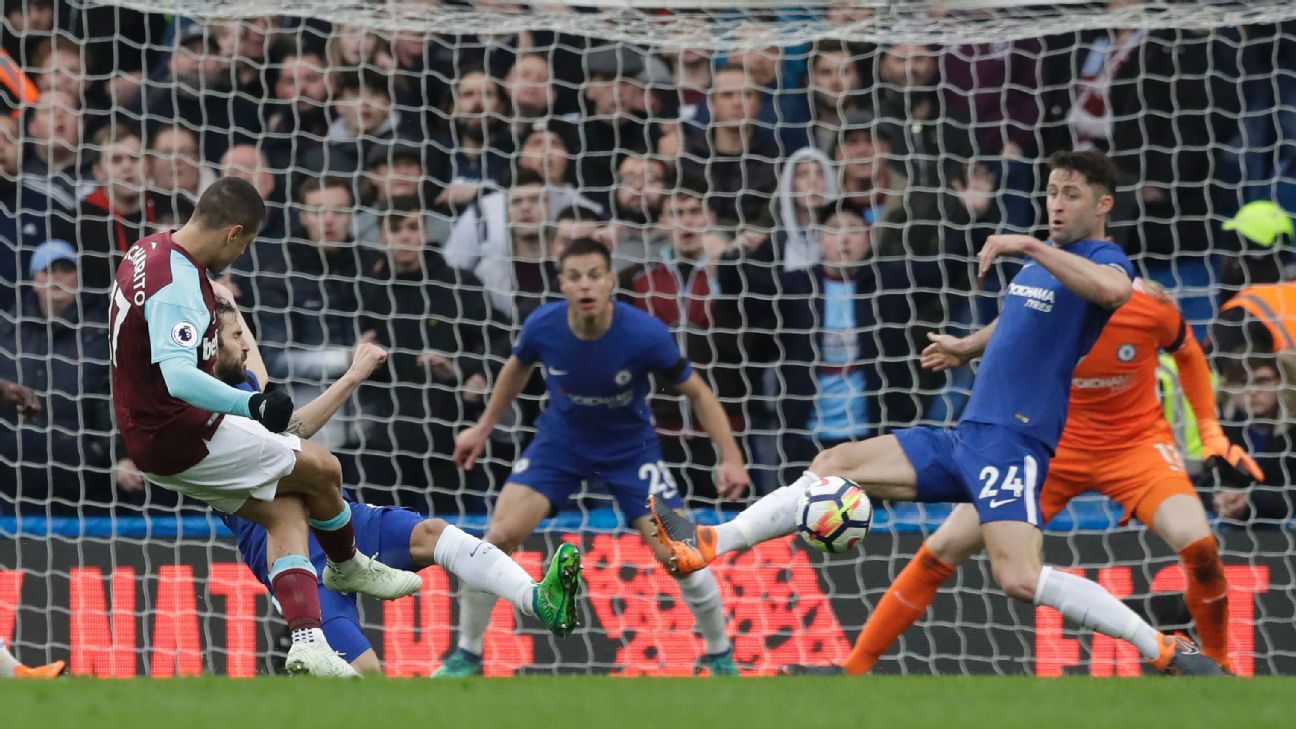 
To say that Chelsea’s results in the past few months have been disappointing would be a colossal understatement. Three wins in 11 Premier League games since the turn of the year, elimination from the Champions League and being knocked out of the Carabao Cup at the semifinal stage by bitter rivals Arsenal have darkened the mood around Stamford Bridge. With hopes of a top-four finish now in tatters, the only shot at redemption this season lies in the FA Cup with Southampton waiting in the last four.

There are several reasons and theories behind Chelsea’s dramatic slump since the festive period, though probably the most frustrating aspect has been their increasing inability to hold on to a lead. The brittleness that has crept into their performances was evident once again on Sunday, when Chelsea’s vibrant attacking performance coupled with defensive solidity should have put them out of West Ham’s reach. Instead, profligacy and individual errors saw the game end 1-1 rather than 4-0.

This fragility is a relatively new occurrence. Until Chelsea’s 2-1 defeat at Manchester United in late February, they’d taken the lead in 15 Premier League games and gone on to win each one. Given their dominance for an hour at Old Trafford, Chelsea should have made it 16 only for the now-familiar trend to emerge.

Despite their previously excellent record in this regard, it had risen its head before in the campaign and to costly effect. Chelsea raced into a 2-0 lead at home to Roma in the Champions League only for the game to end 3-3. The team deserved credit for fighting back from 3-2 down, though given that both teams ended the group stage on 11 points (with Roma finishing top due to their better head-to-head record), the result ultimately proved the difference between facing Barcelona or Shakhtar Donestk in the next round.

Of course, losing a lead is not the end of the world if one can show sufficient mettle to get it back again. In the first half of the campaign, Chelsea demonstrated the requisite character on a few occasions, notably the 2-1 victories away at Tottenham and Atletico Madrid as well as the crazy 4-2 home win over Watford. But since the turn of the year, Chelsea have restored their advantage and won a game just once — the 2-1 FA Cup quarterfinal win at Leicester — and even that required extra time.

Over that same span, the Blues have let a lead slip seven times and failed to get it back, with games that should have been won instead slipping away with damaging consequences. The year started with an injury time equaliser for Arsenal and the trend continued in the 1-1 draw with Championship side Norwich, the 2-1 Carabao Cup defeat at Arsenal, the 1-1 with Barcelona and the loss at Manchester United. Even fresher in the memory are the pivotal 3-1 home defeat to Spurs and West Ham’s unwarranted draw a week later.

This flaw is something that was once anathema to Chelsea. In Jose Mourinho’s first spell, opponents could become visibly demoralised as soon as the Blues opened the scoring in the knowledge that there was little chance of breaching an obdurate and organised unit. Of course, that discipline has fluctuated over the years and Chelsea’s defensive cohesion was all at sea as they finished 10th in 2015-16.

What makes this season particularly disappointing is that much of Chelsea’s play has been very good. Fewer errors would have seen Chelsea safely ensconced in the top four, made a domestic cup final and quite possibly have seen off Barcelona in the Champions League. Instead, the reigning champions’ season is almost cooked.

The finger has understandably been pointed at the defence that, despite enjoying the joint-best defensive record in the Premier League until as recently as February, has failed to keep a clean sheet in their last eight games since beating Hull 4-0 in the FA Cup. Had the attacking area of the team functioned as it should, those individual defensive errors would not have been so punishing.

In 20 games since the start of 2018, Chelsea have scored twice or more just seven times, a rate of 35 percent. In contrast they found the net multiple times in 19 of their 30 matches (63 percent) between the start of the season and New Year’s Eve. Ideally, a team should be potent up front and miserly at the back; if that isn’t possible, it should at least be proficient in one of those areas. Since the dawn of 2018, Chelsea have been neither and subsequently they have had the season that they deserve.

There is no individual player to single out and not even one single area of the team to blame for this situation. Even the manager cannot be held to account for every poor decision made on the pitch. It is a collective responsibility and an issue that must be resolved if Chelsea are to bounce back next season.