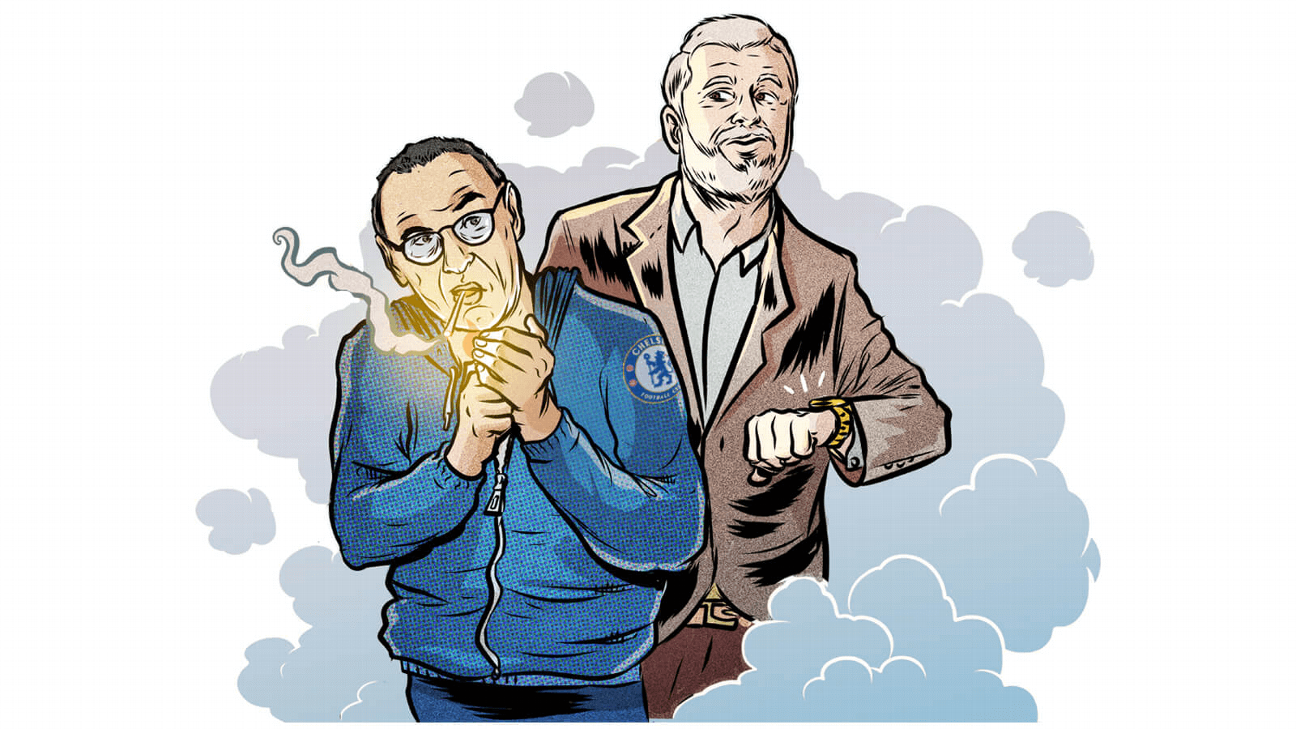 
When Maurizio Sarri said last week that it might take two or three months for Chelsea to play the sort of football he wanted, the instant reaction was to raise an eyebrow and say: “Good luck with that.”

This, after all, is not a club known for patience, and given the state of flux — on the pitch and off it — Chelsea find themselves in, Sarri has possibly the most difficult job in football.

In the 15 years since Roman Abramovich arrived at Stamford Bridge, Chelsea have made their way through nine permanent managers (if you count Jose Mourinho twice) and five caretakers (if you count Guus Hiddink twice). Luiz Felipe Scolari lasted 36 games, Andre Villas-Boas got 40, Roberto Di Matteo was dispensed with 21 games after winning the Champions League and Carlo Ancelotti went the season after winning the double.

In Abramovich’s tenure, you have to look like you’re on your way to winning the league in your first season to last until the end of it. On that basis, Sarri’s task seems monumental. Brendan Rodgers, in one of his more lucid moments, compared management to “trying to build an aircraft while flying it,” and that line is entirely appropriate in this situation.

Perhaps Chelsea will change their habits for Sarri. They’ll have to, not least because this is a problem entirely of their own making. From the back end of last season, it seemed clear that Antonio Conte’s race had been run, that he was unpopular with enough members of the squad to make his position untenable. But throughout the summer, Conte was in the dark about his status, eventually sacked on July 13  having gone through the motions of planning and taking the first few days of preseason training, sent on his way by a curt 52-word club statement.

Sarri’s appointment was confirmed a day later, five days before they left for Australia on their preseason tour and 24 days before the Community Shield. “I have only been here three weeks,” shrugged Sarri after Manchester City strolled past them in that game. “Six of the players I haven’t seen yet.”

It didn’t feel like he was necessarily complaining, but he had every right to. 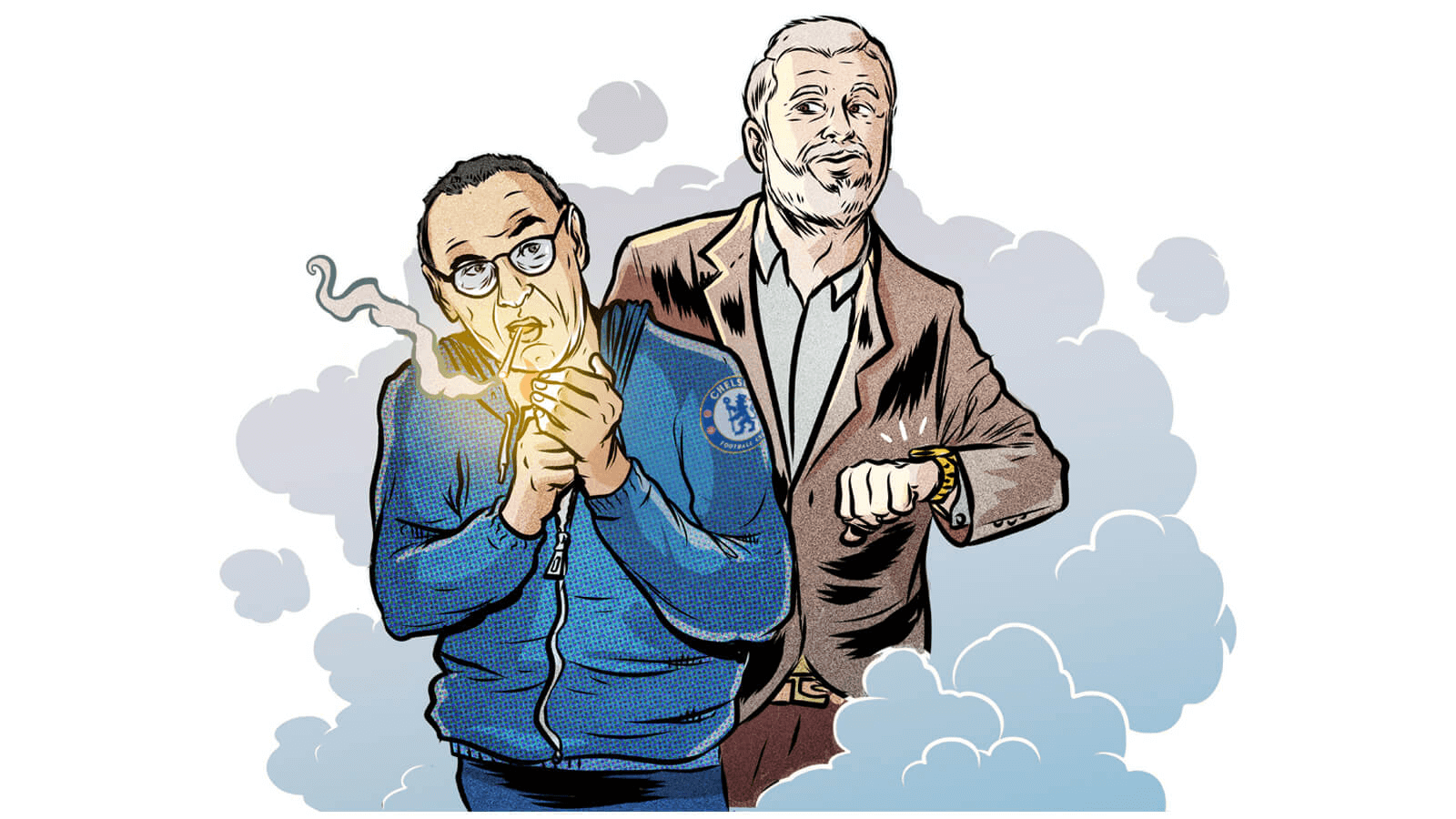 “Chelsea have a knack of doing things late, but this perhaps bordered on insane,” Joe Tweedie, from Chelsea fan site “We Ain’t Got No History,” tells ESPN FC.

“There was a lot of hidden complexity … but surely things could have been concluded sooner? The World Cup was a welcome distraction but it soon hit that Chelsea had still not concluded any matters and the Premier League was weeks away from starting.”

Sarri has been asked to, at the very least, return this side to the Champions League places. In addition to imposing his style as quickly as possible, he must also do so having sold goalkeeper Thibaut Courtois on the eve of the season, replaced by the talented but young Kepa Arrizabalaga and with a striker in Alvaro Morata whose confidence is low.

Sarri, who learned the ropes in the Italian regional leagues, is used to working with what he has, but there’s a big difference between succeeding with Sangiovannese in Serie C and his task now. Even with Napoli the expectation wasn’t where it is at Chelsea.

This is even before we consider whether he’s actually the right man for the job. Napoli earned admirers with a high-octane style of play; a focus on short passing, high and intense pressing and razor sharp forward thrusts, so you can see why Chelsea have been attracted by his “Sarri ball” philosophy. But he has never won a major trophy and his Napoli team ran out of steam at the back end of last season, when it looked like they might finally overhaul the relentless Juventus. There weren’t many guaranteed trophy-getters available this summer, but his appointment still represents a big gamble.

The fans seem to be split on the managerial issue. “The dichotomy between Chelsea’s match going support [largely in favour of retaining Conte] and the online community [could not wait to see the back of him] is an interesting quandary in itself,” says Tweedie.

If those that watched it at the stadium were happy, this suggests the football played last season was pretty decent. Those one removed focused more on the clear off-pitch drama that made it impossible for Conte to continue.

“I am of the opinion that the current playing squad and time he has to enact his beliefs, do not lend themselves favourably to success,” Tweedie adds.

And the on-pitch stuff might end up being relatively small fry compared to everything else. Chelsea have been trying to redevelop Stamford Bridge for years, having previously explored but dismissed a madcap idea to redevelop Battersea Power Station, among others. Spectacular plans were put in place to knock their old home down and start again but in May the club suddenly announced that the £1 billion scheme had been mothballed.

Officially this decision was down to “the current unfavourable investment climate,” but Abramovich’s visa issues will be a concern too. The tightening of laws around wealthy foreign nationals in the UK meant his visa wasn’t renewed earlier in the year, He is only able to spent six months a year in London and not allowed to work.

This will have little day-to-day impact (Abramovich has never really “run” the club, something broadly done by director Marina Granovskaia these days), and it’s hardly unknown for Premier League clubs to be owned by those who live abroad, but he is understandably not keen to make such a commitment when his own status is in doubt.

That said, Abramovich does still contribute significantly to the financing of the club: he put £34 million in last year and £75m the year before. The last available accounts for Fordstam, the club’s parent company, indicate that Chelsea technically owe Abramovich £1.17 billion in interest-free loans. Theoretically, he could call those in with 18 months’ notice but that almost certainly wouldn’t happen, and if he wanted out he’d be far more likely to simply sell up with no shortage of takers — Forbes recently valued Chelsea at £1.53bn, the seventh most valuable club in the world.

However, that doesn’t mean there shouldn’t be some concern. It was telling that, when they announced the suspension of the stadium plans, Chelsea said there was no “time frame set for reconsideration of its decision.” Essentially, there are no plans to reboot a scheme that was sold as crucial to the club’s future.

So welcome, Maurizio Sarri. Among all of this you have to build a team capable of challenging five other Premier League behemoths, and a good showing in the Europa League would be nice too. The game against Arsenal on Saturday will be interesting considering it is between two teams in transition, but it represents Sarri’s first significant challenge in charge. The first of many, you suspect.