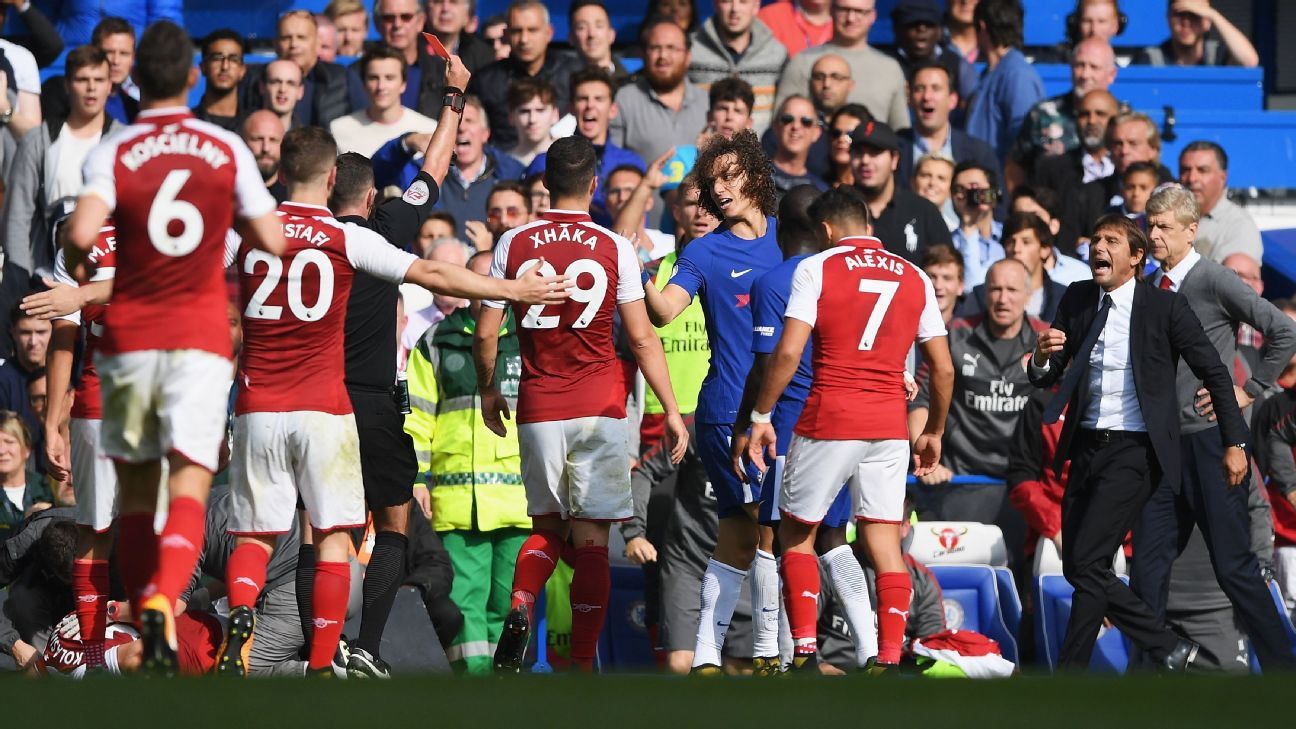 
Sunday’s abrasive 0-0 draw with Arsenal at Stamford Bridge provoked plenty of debate among Chelsea supporters, many of whom were left frustrated by the result. The stalemate meant the Blues lost ground on early season Premier League pacesetters Manchester City and Manchester United.

Discussions are revolving around ill-discipline and team selection. The lack of self-restraint which almost certainly cost Antonio Conte’s side all three points on the opening day of the campaign when skipper Gary Cahill and Cesc Fabregas were sent off in a shock 3-2 defeat to Burnley reared its ugly head again against Arsenal.

This time it was David Luiz who was red carded for a lunge on Sead Kolasinac that was as despairing and ugly as Cahill’s reckless challenge on Burnley midfielder Steven Defour.

Fortunately for Chelsea, following the dismissal of Luiz, they only had to ride out the final few minutes of the game. Had the 30-year-old’s rush of blood to the head come earlier in the contest, like Cahill’s against Burnley, Arsenal could have taken full advantage of the situation and maybe won the game.

As with Cahill, Luiz faces a three-match ban and Conte must plan accordingly. It’s not an ideal scenario for the Italian as Chelsea’s fixture schedule looks very busy at the moment; the Arsenal match the first of five games in two weeks.

Next up is a midweek Carabao Cup encounter with Championship side Nottingham Forest at the Bridge followed by an excursion to Stoke City’s bet365 stadium, where bruises are a given for opponents of the Potters. Calm heads will be required and they seem to be in short supply in Conte’s team this season.

If a tough Stoke side aren’t enough to contend with as Chelsea seek to keep a modicum of level-headiness, they then travel to Madrid to face Atletico at their all-new Wanda Metropolitano stadium. This will be the sixth meeting between the clubs in eight years, enough to suggest that familiarity could breed contempt. In what is likely to be a febrile atmosphere, Conte must ensure his charges maintain their composure.

Worryingly, their final opponents in this spicy sequence of fixtures are Manchester City. Last season’s game at the Etihad ended in what looked like a bar room brawl with Sergio Aguero and Fernandinho both sent off for City. Aguero had spent most of the contest sparring with Luiz so maybe it’s just as well the Brazilian will be suspended for this latest face-off.

If volatility and hostility aren’t enough for Blues fans to ponder, many also placed a question mark against Conte’s team selection for the Arsenal game.

Cahill’s recall surprised plenty who thought that Germany international Antonio Rudiger deserved to keep his place after an excellent showing while the Chelsea captain was suspended. With Luiz sidelined, it will be interesting to see who Conte opts to deploy instead: Rudiger or Andreas Christensen. The latter has looked very comfortable in the middle of Chelsea’s back three when given a chance, but Rudiger looks better equipped to deal with the upcoming physicality the Blues will face, particularly at Stoke.

Against the Gunners, Conte fielded Fabregas ahead of Tiemoue Bakayoko in midfield. The Spaniard’s creativity is a plus, but at times Chelsea looked overrun in the middle of the park. Bakayoko’s tireless box-to-box running appears to be a better match for the dynamic N’Golo Kante, but Conte doesn’t seem to see it that way at the moment.

At right wing-back, the boss now has Davide Zappacosta as a viable alternative to Victor Moses. The former Crystal Palace man got the nod against Arsenal, but it’s Zappacosta, who had a blistering full debut midweek against Qarabag, that supporters are talking about. The Italian scored and assisted in the 6-0 Champions League group stage rout of the Azerbaijan side and it will be interesting to see how Conte utilises the duo over the next four games.

Finally, there is the wizardry of Eden Hazard for the Chelsea manager to consider. Hazard is back to full fitness and his availability means Conte needs to rethink his attack to accommodate the Belgium international — assuming that is what he plans to do. In a repeat of what happened last season, Willian looks the likely fall guy but how this manifests itself over the Blues’ forthcoming flurry of fixtures is anyone’s guess.

To date, Conte has coped admirably with the challenges that have come his way as Chelsea manager. And while supporters may harbour concerns over discipline and team selection, there is no one else they’d rather have in the Stamford Bridge hot-seat.