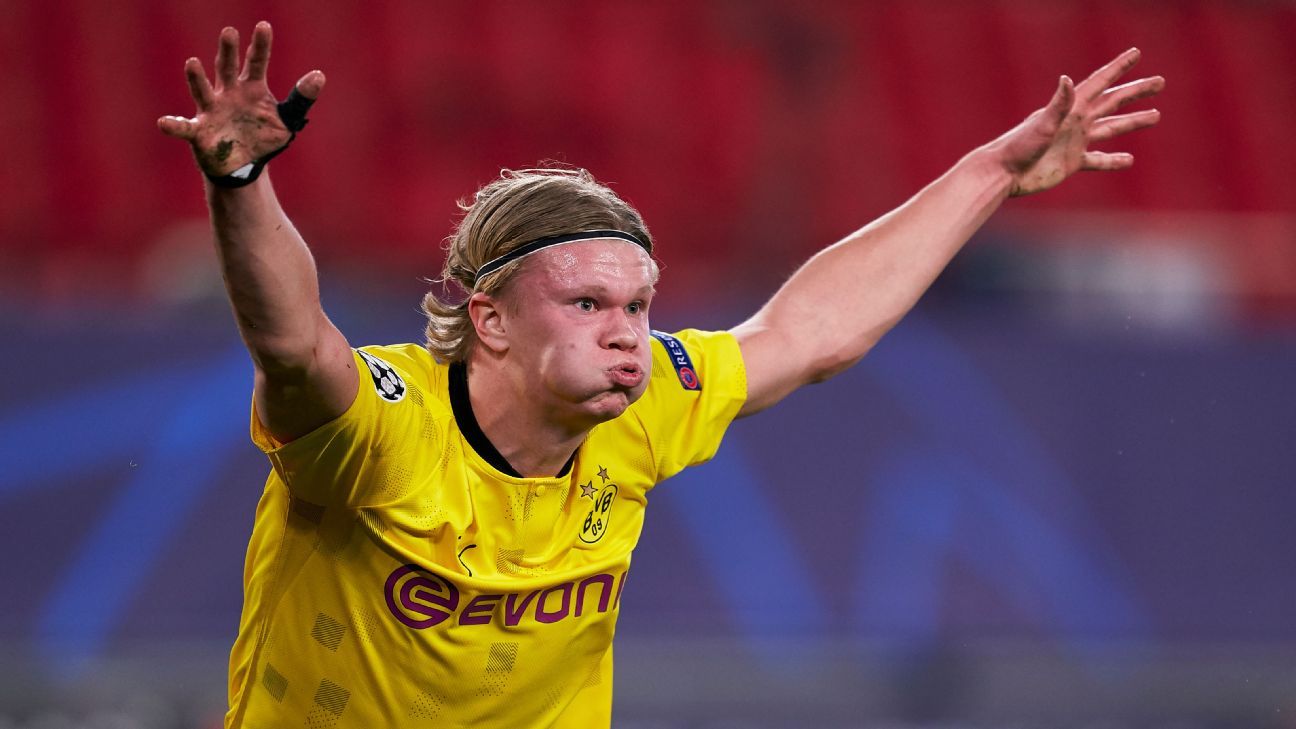 
In this week’s ESPN Insider Notebook, Chelsea look to position themselves in the queue for Borussia Dortmund’s Erling Haaland. PLUS: Eric Bailly must prove he can stay fit to secure a long-term future at Manchester United.

The hunt for Haaland: Breaking down Europe’s top clubs’ hopes

Senior figures at Chelsea believe they can tempt Borussia Dortmund and Erling Haaland into moving to the Premier League this summer, according to ESPN sources, as a growing number of Europe’s heavyweights plot their moves.

Sources told ESPN that Chelsea feel there are several elements in their favour, not least an attractive financial package, but also the prospect of Haaland becoming the centre-piece of a young, expensively assembled team.

Chelsea spent £220 million on six players last summer but there are indications behind the scenes that owner Roman Abramovich is willing to sanction further spending this summer. Chelsea are the only club in London with a realistic chance of signing Haaland and sources said the capital city could be a major draw for the striker, in addition to the club’s ambition to win the biggest trophies every year.

One key unknown, however, is Chelsea’s relationship with Haaland’s agent, Mino Raiola. They have not done much business with Raiola and were reluctant to pay him a significant agent fee when trying to sign Romelu Lukaku from Everton in 2017. Lukaku ended up joining Manchester United for £75 million and the striker ditched Raiola as his agent shortly afterwards.

Raiola’s comments to the BBC that only a handful clubs could land Haaland sparked a fresh wave of transfer speculation this week around Europe. Manchester United have featured heavily in reports linking Haaland with a Dortmund exit and securing him would bring an end to a long pursuit that manager Ole Gunnar Solskjaer thought he had won in January 2020. Solskjaer had met Haaland and a deal looked on, before he moved to Dortmund with a release clause between €75-100 million, according to ESPN sources, inserted into his contract which will become active next summer.

Solskjaer is still in regular contact with the striker, who he worked with during his time in charge of Molde, and when asked about the 20-year-old by reporters, the United manager has refused to dampen talk of a reunion at Old Trafford. United are well aware of his contract situation at Dortmund because of negotiations with Raiola more than a year ago and do not expect him to stay in Germany forever. But with no release clause active this summer, United may not be ready to splash big sums on the player, after Solskjaer recently warned the club will be “realistic” in the transfer market. The club’s latest financial records show revenue is down 7% to £281.8m and profit down 7% to £33.6m.

United’s rivals Manchester City are keen to sign a striker this summer and are one of the few clubs who could afford Haaland. They also have the link with his family after father Alf-Inge Haaland played for City between 2000 and 2003. Haaland was pictured in a City shirt as a youngster and attended a Wembley cup final as a fan with his dad. City are also still interested in Lionel Messi if he decides to leave Barcelona, but a move for him is unlikely to affect their other transfer plans.

Real Madrid‘s summer plans are up in the air, with doubts over how much cash the club will have to spend on transfers and whether Zinedine Zidane will stay on as coach. Both of those questions will be answered, in part, by how the team performs domestically and in Europe between now and the end of the season, as well as the evolution of the pandemic.

Haaland wasn’t previously top of the list at the Bernabeu but sources told ESPN his performances this campaign have caught the eye and he would represent a more affordable option than long-term target Kylian Mbappe, who would likely cost more than double the amount required to meet the Dortmund striker’s release clause.

Considering the great relationship between Paris Saint-Germain sporting director Leonardo and Raiola, the Ligue 1 champions are also in the conversation. But the only way they could make a move is if Mbappe decides to leave Paris. In that case, and especially if Messi was also not an option, Haaland could become a target. Money would not be an issue as Mbappe’s sale would more than cover the cost for Haaland.

Leonardo knows exactly how to deal with Raiola and they have done enough business together in the past 10 years to make this deal happen if Haaland wanted it. Since Qatar Sports Investments took over the club in 2011, they have been really good at convincing big name players to come on board.

While Europe’s heavyweights plot their move, Dortmund’s hope is that they will not be in a position where they need to sell their star striker, though that will all depend on whether they make the top four and play Champions League football next season. Having sacked coach Lucien Favre, it has not been the season many at Dortmund were hoping for as they lie 13 points behind leaders Bayern Munich. BVB are in fifth place and face a fight to make it back into the Champions League next season.

Should he stay at Dortmund, Haaland will be reunited with Marco Rose, who was his manager for six months at FC Salzburg before leaving to take over at Borussia Monchengladbach. — James Olley, Rob Dawson, Alex Kirkland, Rodrigo Faez, Julien Laurens and Stephan Uersfeld

Bailly must prove fitness issues are over at Man United

Manchester United want Eric Bailly to prove his injury problems are over before committing the defender to a new contract, sources told ESPN.

Bailly, signed from La Liga side Villarreal for £30m in 2016, has managed more than 20 appearances in all competitions in just one of his four years at the club. This season, the 26-year-old has missed 63 days and 13 games through injury.

Solskjaer is an admirer of Bailly and has been impressed with his performances alongside captain Harry Maguire, in particular during a run in the team through December and January as United moved to the top of the Premier League. Bailly started seven of United’s nine games between Dec. 23 and Jan. 20, with Solskjaer’s team winning six and keeping four clean sheets.

Bailly will enter the final year of his existing deal in the summer and his representatives have been contacted about the possibility of agreeing fresh terms, sources said. There remain concerns about how often he is ruled out through injury, however, and Solskjaer is keen to sign a left-footed centre-back in the summer transfer window.

Sources added that there is an acceptance there are very few top quality left-sided defenders available. United had been keeping tabs on Dayot Upamecano before he agreed a move from RB Leipzig to Bayern at the end of the season. — Rob Dawson

Ale Moreno is pleased to see Barcelona finally play with personality amid quite a stressful week in the tabloids.

Ousmane Dembele has turned around his Barcelona career thanks to a diet of red fruits, vegetables and an improved attitude, sources told ESPN.

Dembele, 23, was close to leaving Barca last summer, as Manchester United looked to make a move after they failed to sign Dortmund’s Jadon Sancho. Dembele eventually decided he wanted to fight for his future at Camp Nou under new coach Ronald Koeman.

– Copa del Rey on ESPN+: Stream LIVE games and replays (U.S. only)
– Barcelona’s search for new president: Where does this leave Messi?

To improve his chances of breaking into Koeman’s plans, Dembele contracted a French chef who specialised in nutrition for elite athletes. Dembele has had in-house chefs before but it is only now that he has stuck to an improved diet of protein, vegetables and red fruits.

The France international has made several other lifestyle changes, including improving his sleeping patterns, and he has improved his punctuality. In previous seasons he was often late for training, which raised doubts over his commitment. Dembele has suffered a string of serious muscle injuries and has had to undergo two operations since his move from Dortmund for €105m in 2017. However, his general fitness problems appear to have been left behind this season.

Sources told ESPN Barca are keen to extend Dembele’s contract, which expires in 2022. A source said the player is “very happy” at the club, but negotiations over a new deal must wait until a new president is elected on Sunday. — Moises Llorens and Sam Marsden

Watching your team agonisingly miss out on a first league title in over 40 years in the final minutes of the season will always be painful for a fan, but for one Internacional supporter, the damage was far greater and on multiple levels.

With just two matches remaining, Inter had the chance to clinch their first Brazilian title since 1979 if they beat second-place Flamengo who sat a point behind. Rodinei, who had joined Inter the previous year from Flamengo, was unable to play in the match billed as a title decider unless the leaders coughed up 1 million reais ($186,000) as part of the transfer. They were spared when businessman and supporter Elusmar Maggi paid the money. But the decision had nightmare consequences for Maggi as, with the match at 1-1, Rodinei was sent off and Inter lost 2-1.

Following the defeat, and with the title now out of Inter’s hands, Maggi declared to local outlet GauchaZH that he would give more money to Sao Paulo, Flamengo’s final day opponents, as an incentive to win the match. A defeat for the Rio de Janeiro side meant victory for Inter over Corinthians on the final day would see them crowned champions.

Flamengo responded by threatening to take legal action and called the situation a “joke.” Maggi then backtracked and withdrew his offer, claiming he had been caught in the “heat of the moment.”

“Like any other Inter fan, I was greatly impacted by what happened Sunday at the Maracana,” Maggi’s statement to Globoesporte after the match read. “The love for my club moved me to make a spontaneous donation with an intent to help and do my bit in the hunt for the title. After everything that happened, with the disappointing error from the referee and from VAR and the defeat which means winning the title is even harder, I acted without thinking.

“I know it’s not ethical, acceptable or even necessary, I know Sao Paulo, the great club they are, don’t need any financial incentive to attempt to win. I apologise for the words spoken and I reiterate that I never spoke in the name of Inter.”

Despite the withdrawal of Maggi’s offer, Sao Paulo played their part in a dramatic final day with a 2-1 over Flamengo. However, Inter were unable to keep up their end as they drew 0-0 against Corinthians, having seen a penalty awarded overturned by VAR and two goals ruled out — the second of which came in the 97th minute of stoppage time and had temporarily sparked wild celebrations. — Andrew Cesare Richardson

Look back at the key moments for Josep Maria Bartomeu and Barcelona over a tumultuous last 14 months.

Barcelona are in a state of turmoil on and off the pitch and this week they learned they are falling further behind Real Madrid in spending power.

While every team in La Liga has been negatively effected by the coronavirus pandemic, Barca’s situation is most striking — unsurprisingly, given their well-documented financial woes — with their spending cap falling a huge 48% from €671.4m in the summer of 2019 to just €347m now.