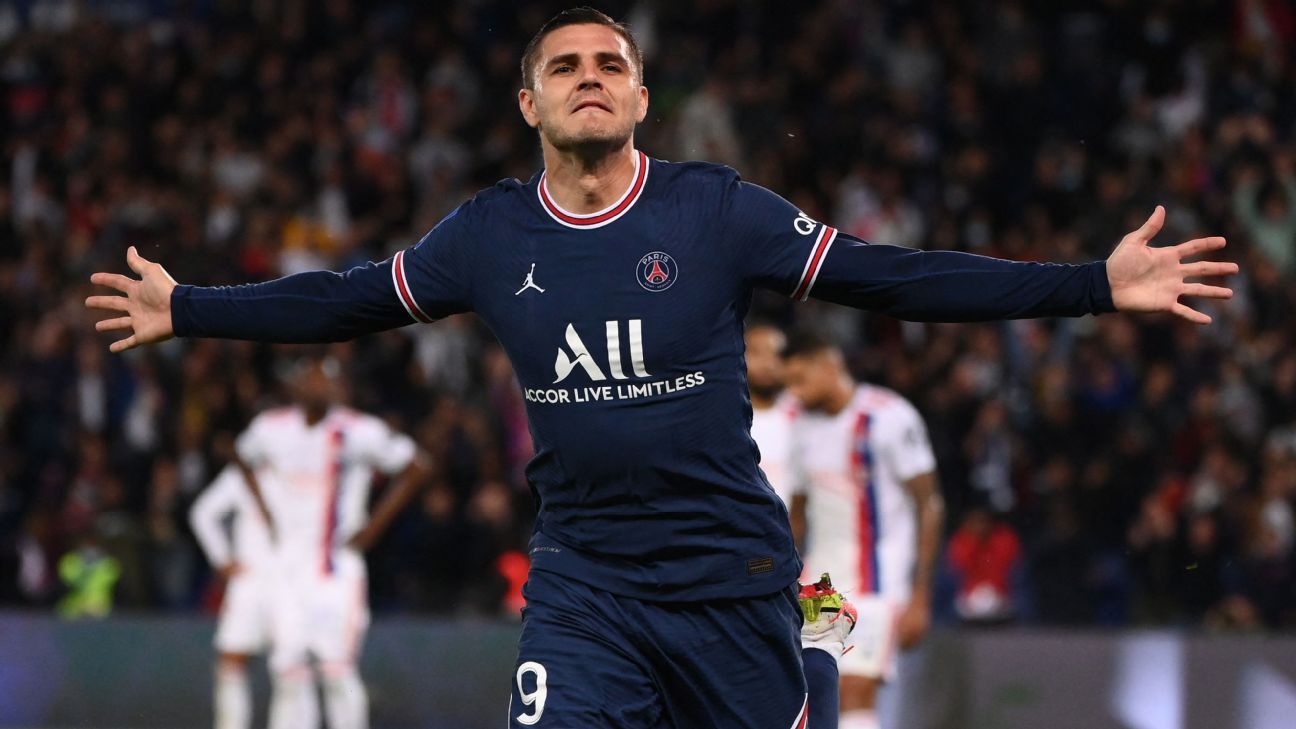 Chelsea are willing to negotiate with Paris Saint-Germain over a January move for striker Mauro Icardi, according to journalist Ekrem Konur.

Icardi, 28, has been linked with a move away from the French capital as he struggles to get game time at the club, who have opted for a front four of Lionel Messi, Kylian Mbappe, Neymar and Angel Di Maria.

The Argentine has reportedly fallen out with fellow countryman Messi, having moved to Paris permanently from Inter Milan in 2020 for €60m after a successful one-year loan.

Icardi has scored three goals in 11 games so far this season, while Chelsea are still looking for a reliable backup to €115m frontman Romelu Lukaku as Timo Werner continues to struggle. Both players are out injured at the moment, with no other strikers available as Olivier Giroud and Tammy Abraham both left for Serie A, while Michy Batshuayi joined Besiktas on loan.

13.55 BST: Chelsea defender Thiago Silva has been approached by Fluminense with a view to a move in the summer, according to Tuttomercatoweb.

Silva, 37, will be available on a free transfer when his contract at Stamford Bridge expires at the end of the season.

The Brazil international played for Fluminense as a youth and also from 2006-09, and he could end his career back in his homeland.

Wirtz, 18, has had a stellar year and has caught the eye of Bayern and Manchester City. Newcastle are also keen to bring in the playmaker now they have money from their Saudi-backed takeover, though a transfer to St James’s Park seems unlikely.

The Germany international is managed by his parents and will not be in a rush to decide his next move, with the report claiming that he will certainly not depart Leverkusen before 2023.

Ramos, 20, had 14 goals in 12 matches for the Benfica B team last season and has graduated to the first team now with three starts this season.

Bayern are looking for a long-term replacement for Robert Lewandowski and are reportedly tracking the Portugal U21 star’s progress.

12.04 BST: Borussia Dortmund midfielder Jude Bellingham has no release clause in his contract, according to Sebastian Kehl.

Bellingham, 18, had been linked with a host of top clubs after impressing in the Bundesliga following his €30m move from Birmingham in 2020.

11.27 BST: Former Atletico Madrid full-back Caio Henrique is being “closely tracked” by Barcelona, Diario AS reports, after impressing for Monaco in Ligue 1, topping the charts for assists and chances created this season.

Caio Henrique signed for Atletico in 2016 but only played one Copa del Rey game for the club, returning to Brazil on loan with Parana, Fluminese and Gremio before signing for Monaco in an €8m deal in August 2020.

The 24-year-old’s form means he’s now being linked with a Brazil call-up and, according to AS, Barcelona have made contact with his representatives.

11.03 BST: Former Athletic Bilbao, Juventus, Swansea and Spurs forward Fernando Llorente has joined LaLiga 2 side Eibar until the end of the season, pending a medical.

Llorente, 36, was released by Udinese in August. He was linked with a return to Athletic earlier this year, before talks broke down.

“I’m very happy and eager to be with the group soon,” Llorente said. “I’ve come here to help Eibar return to La Liga.”

Eibar are currently second in LaLiga2 as they look to win promotion back to the top flight after being relegated last season.

10.58 BST: PSV winger Noni Madueke says he rejected a move to Chelsea and Man United in 2018 before moving to the Dutch club from Tottenham Hotspur’s academy.

Madueke, 19, has scored six goals in 16 games so far this season and also mentioned that his idol was Cristiano Ronaldo as a youngster.

“Chelsea, Manchester United, a lot of European clubs [made offers],” Madueke told BBC Sport. “I came here one time and as soon as I came I wanted to sign straight away. I knew going from Tottenham to United is pretty much the same thing.

“The reason I wanted to go was to progress quicker into the first team. PSV is a top European club. It made so much sense at the time and it makes sense now.”

The ESPN FC panel speculate on the impact Antonio Conte could make as manager at Manchester United.

09.44 BST: Dele Alli’s future at Tottenham is up in the air as The Daily Mail reports that the midfielder been left out of the Carabao Cup squad to face Burnley on Wednesday.

Alli, 25, has not played a single minute of top-flight football since Sept. 26, when he was substituted at half-time in the north London derby loss to Arsenal, and manager Nuno Espirito Santo seems to want to use other options.

Xavi, a Barcelona legend from his playing days, is considered among the candidates to replace Ronald Koeman, should the Dutchman be dismissed.

Asked if Xavi is ready to triumph at Barcelona, Cazorla, who helped Al Sadd win the Emir Cup earlier this month, said: “I see him totally ready. It’s his dream and it’s in his mind at some point in the future. Few people know the club [Barca] like he does. I see him perfectly capable.”

Xavi left Barcelona in 2015 for Al Sadd, having played for the Qatari side until 2019 before taking over the coaching position.

“Our training drills are based on rondos, possessions, positional play… pure Barca school,” Cazorla added. “And to defend while having the ball. That is how we play each game. Xavi understands football in this way and that is how we play. In Spain’s national team we already had that football philosophy. It’s very clear to him.”

“Since I’ve arrived, I have not lost in the league and I’ve won five titles in total,” the former Arsenal player said. “I’ve been lucky to have won things in Europe but not as often as here, and in only a year and a half.”

08.30 BST: Carlo Ancelotti has warned €100m signing Eden Hazard he will have to fight to win a place in his Real Madrid team, and said “the problem he has right now is he has a coach who prefers another player.”

Hazard, 30, was an unused substitute in Madrid’s 2-1 El Clasico win over Barcelona on Sunday after he missed last week’s 5-0 Champions League thrashing of Shakhtar Donetsk with an injury picked up on international duty.

Ancelotti picked the in-form Vinicius Junior — who has scored seven goals this season — and Rodrygo on the wings at Camp Nou and was rewarded when both were involved in David Alaba’s opener.

“The problem [Hazard] has right now is he has a coach who prefers another player,” Ancelotti said in a news conference on Tuesday ahead of Madrid’s LaLiga game with Osasuna. “That can happen in a squad like Real Madrid’s. What’s important is the player has the motivation to work to play. He is doing that.”

– Manchester United‘s Paul Pogba has put talks over a new contract on hold, according to The Sun. The midfielder is out of contract in the summer and, while the Red Devils have expressed a desire to extend his stay, he could leave for free at the end of the season. The report comes after the 28-year-old apparently snubbed manager Ole Gunnar Solskjaer after his side’s 5-0 loss to Liverpool on Sunday. Pogba came off the bench at half-time before he was sent off 15 minutes later for a rash challenge on Naby Keita. The France international is said not to have apologised to his teammates for the red card, though said the Sun’s story was ‘FAKE NEWS’ on social media on Wednesday.

– While Arsenal and AC Milan have previously been linked with a move for Club Brugge playmaker Noa Lang, Borussia Monchengladbach are also said to be interested. According to Calciomercato, the Bundesliga club are eyeing a potential move if forward Marcus Thuram leaves in January.

– Barcelona are no longer considering making the loan move of Yusuf Demir permanent, according to Sport. The 18-year-old is on loan with the LaLiga club from Rapid Vienna, with an option to make the move permanent for €10m. However, the youngster has failed to break into the team after a decent start under Ronald Koeman. The clause would only become an option if he plays 45 minutes in more than 20 games.

– Despite only signing him in the summer, there are concerns over Denzel Dumfries at Internazionale, which may force the Serie A side back into the market for a right-back. According to Gazzetta dello Sport, the full-back’s performances have been a concern, as Inter keep an eye on Sampdoria player Bartosz Bereszynski as an alternative option.

– Inter have also met with the agent of Morten Thorsby over a potential deal, according to Calciomercato. The 25-year-old plays for Sampdoria, joining on a free transfer from Heerenveen in 2019. He is viewed as an option to bolster Inter’s central midfield ranks.