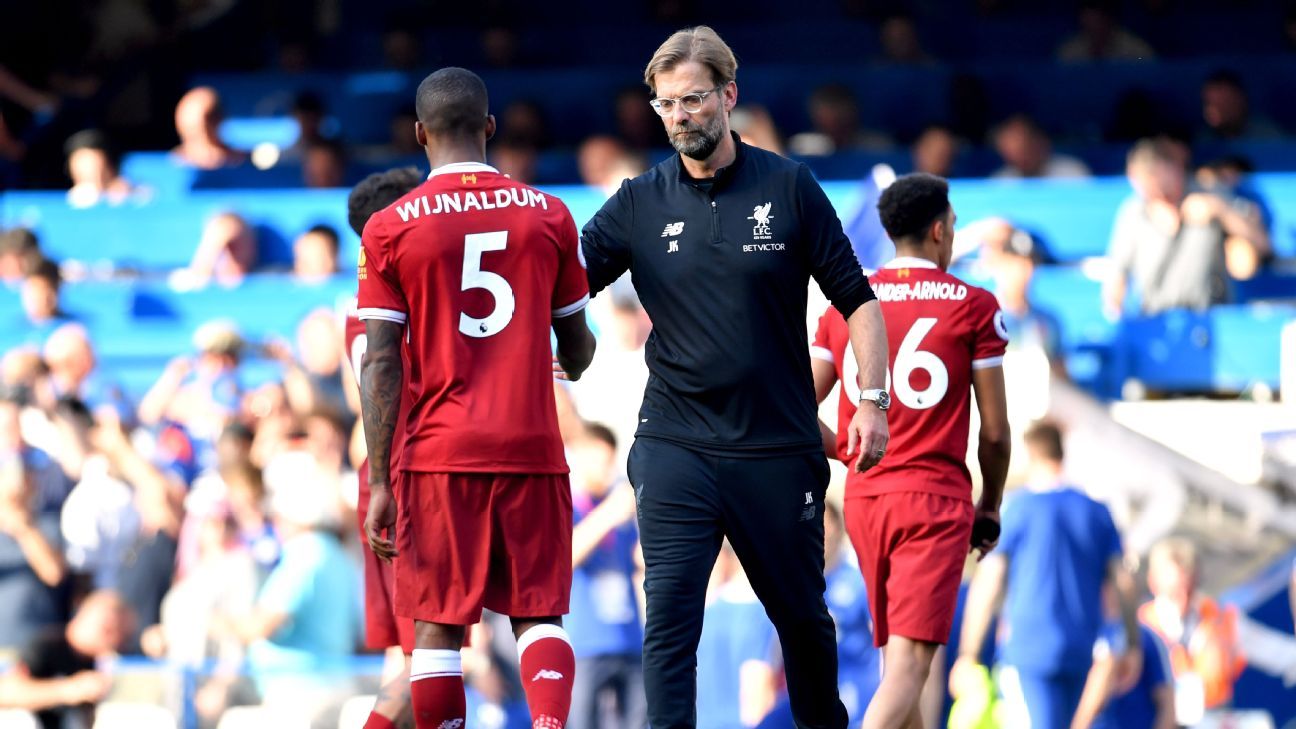 
LONDON — Three thoughts from Stamford Bridge on Chelsea’s 1-0 win over Liverpool in the Premier League.

Liverpool face an anxious wait to seal a top-four finish after Olivier Giroud’s first-half winner kept Chelsea in the hunt for a dramatic late surge into the Champions League qualification positions.

Giroud’s 32nd-minute header was enough to secure a fourth successive Premier League win for Antonio Conte’s team, enabling them to climb into the top four if they win their final two games against Huddersfield and Newcastle and either Liverpool or Spurs drop points this week.

Chelsea’s late form has coincided with Liverpool losing their momentum, with this defeat taking their recent run to four games without a win — three of them coming in the league.

Are Jurgen Klopp’s team running out of steam at a crucial stage of the season as they prepare for the Champions League final against Real Madrid on May 26?

Has Mohamed Salah’s incredible scoring run hit the buffers at the same time, with the Egyptian extending his goalless run to three games in Sunday’s contest against his former club?

Liverpool, who failed to score in successive league games for the first time since August 2015, likely have to beat Brighton at Anfield next Sunday to be certain of a top-four finish.

But with Klopp’s men then having a 13-day break before the Champions League final, has their momentum stalled or does the rest come at a crucial time?

Liverpool and Klopp certainly have questions to answer as they approach two crucial games at the end of their season.

Although Liverpool have still to confirm a top-four finish in the Premier League, the real focus now is on the Champions League final against Real Madrid on May 26 and ensuring that every area of the team is in full working order when they face the current holders in Kiev.

Salah’s mini goal drought — three games and counting — will be a concern if it continues between now and May 26, and the lack of cover in midfield will be a problem if Klopp suffers further injuries in that department.

But with less than three weeks to go until their eighth European Cup final, the biggest issue for Liverpool looks to be their vulnerability at full-back — something that Chelsea exposed time after time at Stamford Bridge.

Andy Robertson has done well in his first season at Anfield after last summer’s arrival from Hull City and has established himself as first-choice left-back ahead of Alberto Moreno, but the Scot was given a torrid time by Victor Moses in this game.

Chelsea’s opener came from a Moses cross on the right, with Giroud rising highest to head it home, but Robertson should have prevented the ball from being delivered.

And on the right, Nathaniel Clyne’s lack of sharpness after a long-term injury showed up when he was booked for a wild tackle on Marcos Alonso. In the Champions League, that kind of challenge could merit a red card.

Trent Alexander-Arnold, Klopp’s regular right-back, played further forward against Chelsea, but his poor performance against Roma in midweek will have alarmed Klopp ahead of the Real Madrid clash.

Klopp replaced both Clyne and Robertson before this game was done, and when the likes of Cristiano Ronaldo, Marco Asensio and (possibly) Gareth Bale face Liverpool’s full-backs in Kiev, Real will expect to expose their shortcomings as Chelsea did.

3. Giroud and Firmino prove centre-forwards still have a key role to play

There have been times in recent years when it looked as though the classic centre-forward was a dying breed in the modern game.

The era of the false nine led to traditional No. 9s being phased out in favour of more diminutive and mobile players who could play across the forward line.

But Stamford Bridge witnessed displays by Giroud and Roberto Firmino which highlighted the value of having a top-class centre-forward in your team.

Giroud’s first-half header was only his fourth goal for Chelsea since arriving from Arsenal in January, but the French forward is much more than a goal-scorer.

His ability to hold the ball up, provide a threat in the air and dominate opposition defenders was evident against Liverpool, with even the imposing Virgil van Dijk struggling to contain him.

In the absence of the injured Alvaro Morata, who has been unable to show similar qualities this season, Giroud showed himself to be a smart acquisition by Chelsea.

Firmino, meanwhile, had a more frustrating afternoon for Liverpool, but the Brazilian still made his presence felt.

He troubled Gary Cahill all afternoon, in the air and on the ground, and created space for prolific strike partner Salah.

It may not have been his day in front of goal, but Firmino had an impact nonetheless.