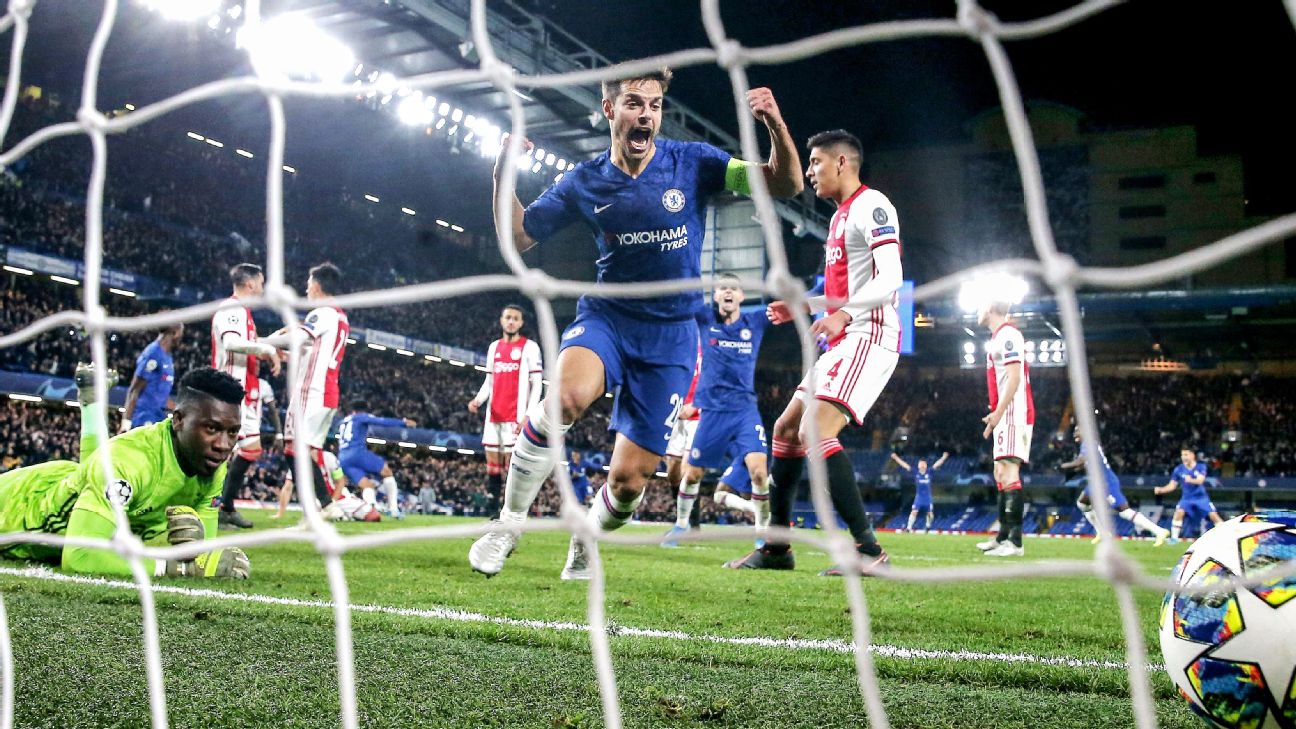 
LONDON — Chelsea 4 Ajax 4 — a game with goals, red cards, defensive mayhem, penalties and VAR. It was a coach’s nightmare, but a supporter’s dream. One of those nights that reminded us all why we fell in love with football in the first place.

“It was a mad one,” Chelsea manager Frank Lampard said after the game. “We had a 4-4 with Liverpool once, but I don’t remember anything like tonight in my day because the game is a different animal now with VAR.”

Having been 4-1 down with less than half an hour to play, Chelsea looked to have snatched a remarkable 5-4 victory when Cesar Azpilicueta netted his second goal of the game on 78 minutes, only for referee Gianluca Rocchi, with the help of VAR, to disallow the goal for a handball earlier in the sequence by Tammy Abraham.

It would have been harsh on Ajax to lose after such an impressive opening hour, but there is always an element of jeopardy with the Dutch champions. They live by the sword and, as we have seen over the past two campaigns, are ready to die by it, too.

But Chelsea should be thankful that their opponents were Ajax — a team seemingly incapable, or unwilling, to play the percentages and pragmatically see a game out.

Lampard’s team were obviously helped by the double dismissal of Ajax centre-halves Daley Blind and Joel Veltman following second yellow cards to each just before the 70-minute mark, but the end result wasn’t just about the Dutch champions being down to nine men. Chelsea’s fearless football drove them back into the game.

But Erik ten Hag’s players continued to honour Ajax’s tradition of being bold and trusting their ability to find a way to goal, even when they had a two-man disadvantage, and they still tried to win the game in the dying stages when any other team would have thrown up the shutters, simply to hold on to the draw for dear life.

Six months ago, Ajax allowed a place in the Champions League final to slip through their fingers by naively throwing away a 2-0 lead in second leg of their semi-final with Tottenham. Even at 2-2, the Dutch side were going through but they conceded a goal six minutes into stoppage time to lose 3-2, and on this evidence, they clearly haven’t learned their lesson from that bitter experience.

But playing it safe has never been the Ajax way and that is why we ended up with a classic 4-4 draw at Stamford Bridge, that left Chelsea and Ajax in a three-way tie on seven points with Valencia in Group H.

The game was less than two minutes old when a Quincy Promes free kick was diverted into his own net by Abraham. Nevertheless, Chelsea goalkeeper Kepa should have done better and kept it out of the net.

Having already beaten Real Madrid, Juventus, Tottenham and Valencia away from home in the Champions League in 2019, Ajax were making an early start in their bid to seal a fifth signature road victory.

But their lead would not last, Chelsea pulling level within two minutes after Jorginho scored from the penalty spot following a trip by Nicolas Tagliafico on Christian Pulisic.

A crazy start, but surely the game would now settle down with the two teams regaining their composure and organisation? Not quite.

Abraham had a goal disallowed for offside on 14 minutes after latching onto Mateo Kovacic‘s pass, but Ajax then regained the lead when the unmarked Promes headed in Hakim Ziyech‘s cross from close range on 20 minutes.

When Ziyech, who performed like a combination of Mesut Ozil and Riyad Mahrez on a good day, made it 3-1 on 35 minutes with a free kick from an impossible angle that went in off the post and Kepa’s face, Chelsea looked to be out of answers.

Ajax were beating them with a display of youthful energy and audacity and they appeared to be destined for another great European victory when Ziyech teed up Donny van de Beek to make it 4-1 on 55 minutes.

Azpilicueta’s far-post goal just after the hour mark seemed like little more than a consolation for Chelsea, but the game was turned on its head when Blind, and then Veltman, were sent off just five minutes later in a wild sequence.