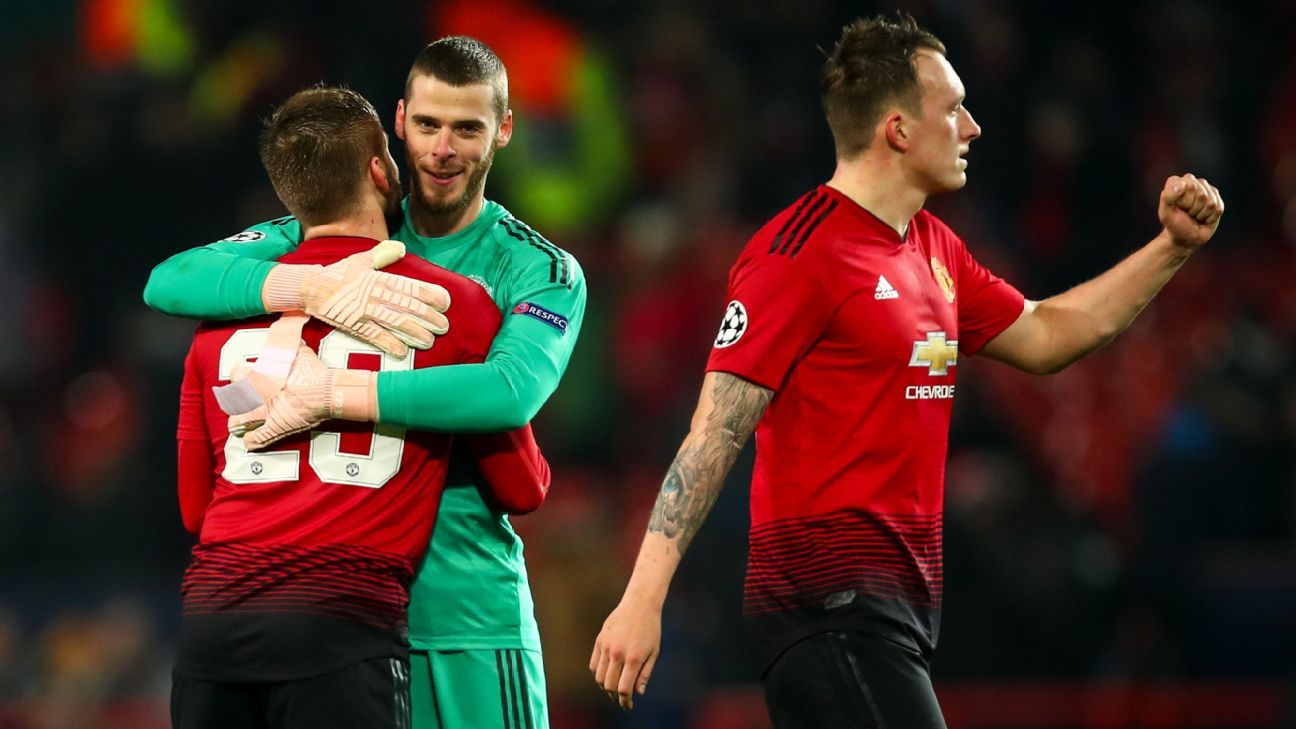 
The Champions League is down to its final matchday, but who were the stars of the penultimate group edition? Here’s the best XI from Matchday 5.

Would Jose Mourinho still have a job if it was not for the long-standing brilliance of his goalkeeper? De Gea’s latest masterclass came in a jawdropping second-half stop from Young Boys’ Ulisses Garcia, whose deflected effort looked bound for the bottom corner before the Spaniard clawed it away. It was a stunning piece of athleticism and set the stage for United to squeak out a vital late win — which also hammered home the potential consequences of being without him.

Cristiano Ronaldo’s invention may have unlocked the door for Juventus against Valencia but his fellow summer arrival, Cancelo, is having as much impact at the other end. The defender had an excellent game against his former club, nullifying the threat of the dangerous Goncalo Guedes while contributing further forward too, to help Juve guarantee their spot in the knockouts.

Two matchdays, two vital contributions for the underrated Bernat. This time he opened the scoring against Liverpool with a smart piece of work to seize onto a botched clearance from Virgil van Dijk before switching the ball onto his right foot and firing past Alisson. His left-sided partnership with Neymar worked well and also managed to keep Mohamed Salah and company quiet.

Who could have predicted that free-scoring Borussia Dortmund would fire a blank against the unfancied Belgians? A point suited both sides, the Bundesliga leaders qualifying for the knockout stage and Brugge confirming a Europa League spot, but Poulain and his defence had their work cut out against one of Europe’s most scintillating attacks and performed admirably. They kept the hosts at arm’s length despite enjoying only 24 percent possession, making for a highly impressive rearguard action.

Vertonghen has missed the last two months through injury, but looked as if he had never been away during Tottenham’s impressive win over Inter. He missed a decent opportunity to open the scoring after a pinpoint Christian Eriksen free kick but his input was much more important at the other end, where he kept the prolific Mauro Icardi quiet to ensure Spurs were rarely in serious trouble even when the pressure increased towards the end of the game.

Why try a different trick when this one works so well? Robben turns 35 in January but few opponents have worked out how to stop him cutting inside onto his left foot, working half a yard and letting fly. He did so twice to open the floodgates for Bayern against Benfica — the first a fantastic effort after tricking his way inside from a seemingly innocuous position — and while this has been an up-and-down season so far in Bavaria there is plenty of life in the old dog yet.

Sissoko’s reinvention at Tottenham continues. The team laboured for long periods in their must-win game against Inter but the France international was vital in stepping up the tempo when necessary. In the first half a 50-yard run upfield resulted in a chance for Lucas Moura that Samir Handanovic saved; with 20 minutes to play a similar burst, turning a nothing situation into an opening, saw him find Dele Alli, who laid on the winner for Christian Eriksen. It was a gamechanging contribution and, given his current form, no huge surprise.

It is tempting to wonder whether Verratti’s form and fitness, as much as the gifts of Neymar and Kylian Mbappe, are the most important factors in PSG’s latest Champions League tilt. He was fortunate to escape with a yellow card for a horrible first-half challenge on Liverpool’s Joe Gomez but his overall performance was masterful. Few can bring a game under their spell quite like the Italian when he is in full flow, pulling the strings and dictating the tempo; Liverpool, for all their huff and puff, could simply not get close to him in midfield.

You might love him, hate him or — like Jurgen Klopp — be absolutely infuriated by him, but nobody who watched him sparkle against Liverpool could doubt Neymar’s star quality. Occupying an unfamiliar left-wing role in a 4-4-2, the Brazilian was almost unplayable at times — tearing into the English side and supplying the all-important second goal. It came when Neymar surged forward from close to the left-back position, changing the tempo of the game in an instant, before combining with Kylian Mbappe to eventually profit from a rebound. On this form, perhaps PSG can count on him to bring them closer to the Champions League trophy than ever.

Messi’s 106th Champions League goal meant he has scored more than anyone else at this level for a single club. It is just the latest record he has sent tumbling but the manner in which he achieved it was even more impressive. His brilliant solo strike at PSV, weaving past defenders before finishing emphatically, was simply vintage and, with six goals already in this year’s competition, he already looks a fine bet for the Golden Boot.

What an impact Cornet enjoyed against Manchester City, who found Lyon’s pace and movement near-impossible to cope with for the second time this season. The Ivorian scored two superb goals, rocketing the first past Ederson from 20 yards and then running clear to slide home what looked to be the winner, and would have had a hat trick if his acrobatic effort had not rebounded off the woodwork. His performance saw him double his tally for the season and perhaps enhance his potential transfer value, too.