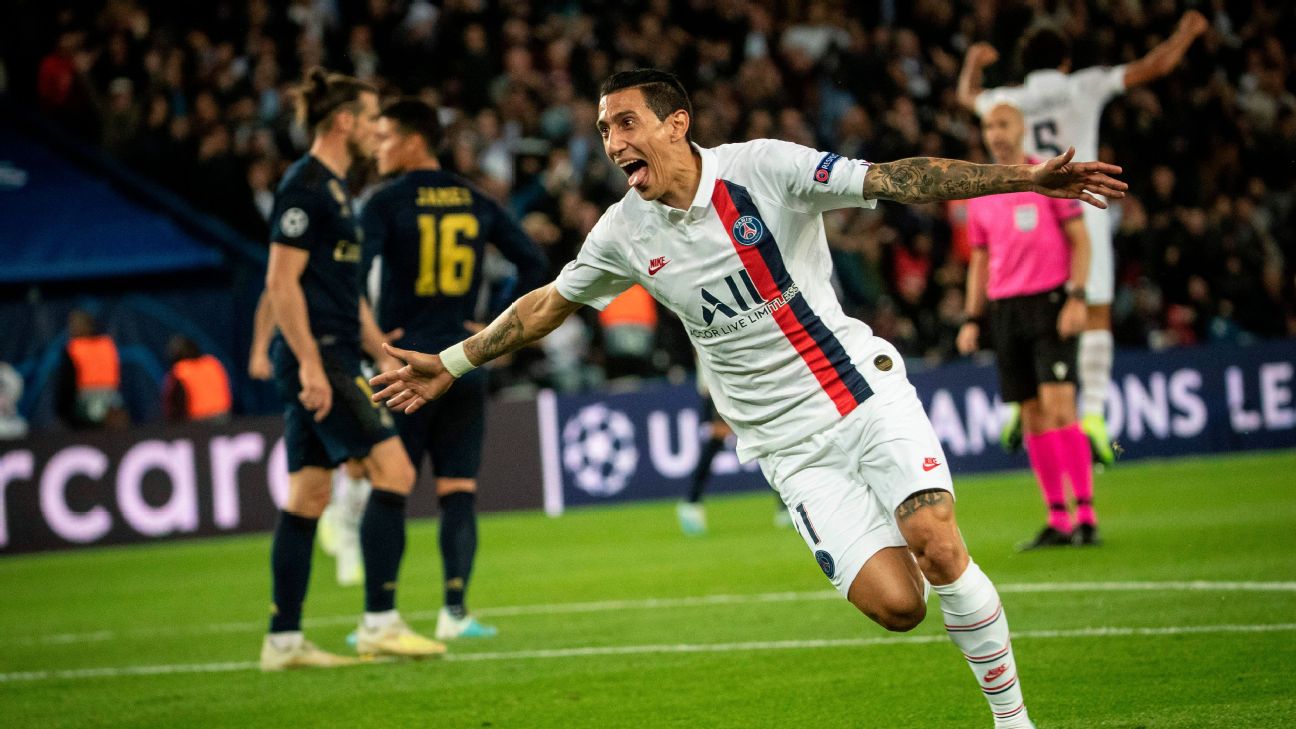 
This week in Europe, Tottenham need a win against Red Star and Real Madrid can’t afford another bad result as they travel to Galatasaray. But heading into Matchday 3, we thought we’d do a little myth-busting when it comes to Europe’s top competition. Even though things don’t normally get spicy until the knockout rounds, there’s been more than enough to go around so far.

Myth: The Champions League has been boring so far

It’s always hard to know what to expect from the group stage of the tournament, especially when the seedings and pots always make it fairly evident that the biggest and best clubs will reach the round of 16 even while dropping points everywhere from Paris to Prague. But the early going this year has felt different. Not only are a couple of the pre-competition elite currently winless (Real Madrid, Inter Milan) but several others (Barcelona, Liverpool) have looked vulnerable.

We’ve enjoyed gaudy scores and jaw-dropping upsets. We’ve had absurd goals and seen records shattered. Take Paris Saint-Germain’s 3-0 thumping of Real in Matchday 1. Bayern slamming seven at Tottenham’s shiny new home. How about Liverpool racing to a 3-0 lead at home to FC Salzburg, only for the Austrian side to pull level before Mohamed Salah‘s winner? Or Ajax, who lost their two best players (Frenkie de Jong, Matthijs de Ligt) over the summer but won their first two games by a combined 6-0 score?

There’s a palpable sense of tension this season and with 97 goals so far, we’ve got more goals per game (3.1) than four of the big five European leagues, second only to the Bundesliga for entertainment on a per-90 basis. We can expect more of the same, too, with four rounds to go and several teams needing to up their game. — James Tyler

However you assess Real Madrid sitting bottom of their Champions League group ahead of Matchday 3, two facts must be faced.

For the last hour of their match in Paris and during 45 brutally embarrassing minutes at home to Club Brugge, Real Madrid were awful. A complete shadow not only of recent (Euro-dominant) seasons, but also of quite a good proportion of their domestic form in 2019-20. Utterly out-muscled and made to look exhausted in Paris, they topped that with a complete inability to recognise — never mind blunt — Philippe Clement’s tactical plan via which the Belgian league leaders ripped Los Blancos to shreds and made a hero out of two-goal Emmanuel Dennis.

You could say that these uncharacteristic performances and the shocking group position flow from the famous “death by a thousand cuts” — there isn’t one major factor but a hemorrhage of minor problems. It’s a nice metaphor but Real Madrid ain’t dead. Not by a long way. The fundamental problem that’s driven Zinedine Zidane mad with frustration is that a combination of injuries and suspensions have stripped him of the chance to establish a pretty steady first XI and then start that lineup in, say, four out of five consecutive matches.

The fitness and conditioning adjustments needed when a new specialist coach, Gregory Dupont, joined much later in the summer than was ideal, have not helped. But his work is slowly paying dividends. And across the team there are niggling worries but because Zidane is gradually correcting them, the keys are simple. Until Eden Hazard is a fixture in this team, who ‘unlocks’ dogged, packed defences? And if Karim Benzema doesn’t have his scoring boots on, who will step up to the plate and damage rivals like Luka Jovic was supposed to?

Long-term solutions are required and will be found, but in the short term, Zidane needs heroes this week in Istanbul. — Graham Hunter

Myth: No players have really stood out so far

The Champions League may not have showcased the best of, say, Cristiano Ronaldo or Lionel Messi yet, but that doesn’t mean it’s been lacking.

Take, for example, Bayern Munich’s Serge Gnabry. It spoke volumes that the German giants were quite content with moving on from the twin wide threat of Arjen Robben and Franck Ribery given the 24-year-old’s potency and his display against Spurs felt like confirmation of his arrival in the top bracket. Gnabry scored four times in the second half, his finishing a bewitching combination of precision and sheer confidence, and has continued in that vein since. “He’s world class; there’s nobody else with his abilities in the Bundesliga,” his manager, Niko Kovac. It remains baffling that Arsenal didn’t invest in him.

Another to catch the eye is FC Salzburg’s Erling Haaland. While the whole team has looked breathtaking in the early going — the creative forces of Hwang Hee-chan and Takumi Minamino, who already have three assists apiece, almost helped them earn a famous upset at Liverpool in a 4-3 defeat — 19-year-old Haaland has captured the imagination. His well-taken treble against Genk rightly made headlines but he followed that up by making a huge contribution at Anfield just four minutes after emerging from the bench. The son of former Leeds and Manchester City utility man Alf Inge Haaland will surely join one of Europe’s giants sooner or later.

Then there’s Mislav Orsic of Dinamo Zagreb. It feels like “better late than never” for the 26-year-old forward but his blistering hat-trick against Atalanta on Matchday 1 announced him to the world. Orsic had barely featured on the European radar until this season because between 2015 and 2018, he had been playing his football in China (with Changchun Yatai) and South Korea (with Jeonnam Dragons and Ulsan Hyundai). “I’m probably a surprise for some who did not know me as I was playing in Asia, but I think there is still room for improvement in my game,” he said after that salvo against the Italians. Orsic was seen as a hot prospect earlier in his career and now, under the brightest spotlight at last, he seems determined to make up for lost time.

If those three aren’t enough, Dortmund’s Achraf Hakimi (now in his second season on loan from Real Madrid) has been showing his versatility to stellar effect. First he shone at right-back in the goalless draw with Barcelona, keeping a leash on Antoine Griezmann and Jordi Alba; then, deployed on the left wing at Slavia Prague, he capped a fine personal performance with the two goals that won the game. Or Dennis, whose two goals at the Bernabeu in Club Brugge’s 2-2 draw were unorthodox, but who cares? How 21-year-olds go to Europe’s most famous citadel and do what he did? He even capped it by mimicking Cristiano Ronaldo’s once-familiar celebration in front of the crowd that used to adore the Portuguese star.

“I’ve been a Cristiano fan forever and was very upset when he left Madrid,” Dennis said afterwards of his idol’s move to Juventus. He now has six goals in all competitions this season and could find himself emulating Ronaldo on a more regular basis if he keeps up this kind of form. — Nick Ames

Liverpool’s start to the Champions League season does not particularly scream “kings of Europe,” with five goals conceded and a serious scare against FC Salzburg, but Jurgen Klopp’s side will not be too concerned given their first two fixtures of the triumphant 2018-19 campaign also had a return of one defeat, one win and question marks against the defence. The Merseysiders have shown a nous in navigating continental challenges, reaching three European finals under Klopp and dispatching heavyweights like Barcelona and Bayern Munich in the process.

Do they need to improve in the tournament? Yes. Will they? Absolutely. That instantly means elevating their performances away from home. Liverpool have won only one of their last 10 Champions League group stage matches on the road, losing each of the last four. Klopp’s record away from Anfield in the competition is just 11 wins in 31 games. Wednesday’s trip to Genk provides the perfect tonic to remedy that given the Belgians have zero victories at 14 times of trying in Europe’s premier competition. — Melissa Reddy

Myth: This is still a three-team tournament

Last month, I told you it was a Big Three. Either Manchester City, Liverpool or Barcelona were going to win the Champions League and anything else was a flight of fancy. A couple of weeks later and those three teams remain the three biggest favorites to lift the European Cup, but the numerical designation warrants a change. It’s not a Big Three anymore; it’s a Big One.

Just two games into the competition, City’s odds of winning it all have dropped from +320 to +300, while Liverpool’s and Barcelona’s odds have increased from +550 to +600 and +650, respectively.

Why the sudden change? And is it an overreaction?

Well, for teams that begin in the group stages, the entire Champions League will last for no longer than 13 total matches. The winner’s tournament is already 15 percent of the way there. Barcelona and Liverpool have played significantly harder schedules so far but despite OK-ish results that have them both sitting in second place in their groups, they each have negative expected-goal differentials so far, per the website FBRef. City, meanwhile, lead the way in both xG for (6.7) and against (0.8). In other words: Through two matches, City have looked like an all-conquering Champions League champ, while Liverpool and Barcelona have been the second-best teams in their groups — at best.

So, it’s time for a minor reset of our expectations. City are even bigger favorites than when this thing started. And Liverpool and Barcelona — along with Paris Saint-Germain (+700) and Bayern Munich (+750), who both pummeled recent Champions League finalists in their opening pair of games — are now part of the chasing pack. — Ryan O’Hanlon