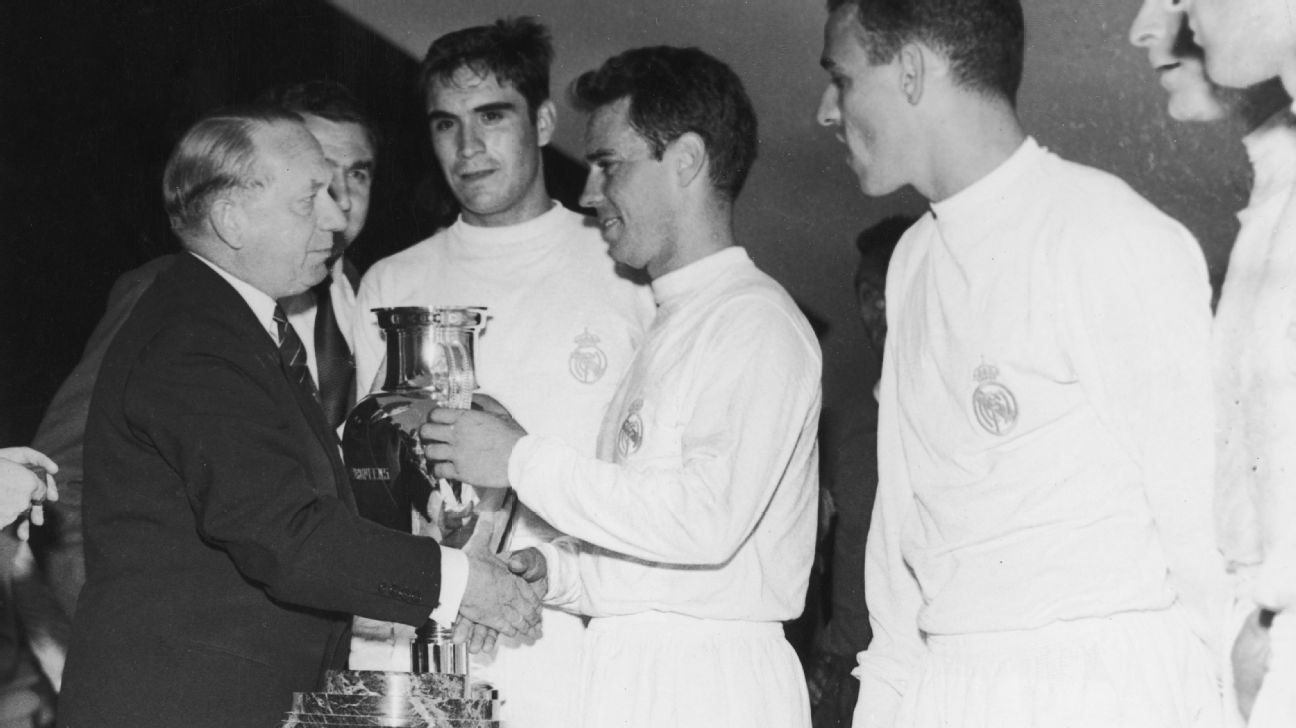 Real Madrid and Liverpool have been involved in 17 European Cup/Champions League finals over the years. But which is the best?

Of Real’s glorious run in the first five years of the European Cup, this was probably the most uninspiring final. Having beaten Atletico in the semis, Real were without the injured Ferenc Puskas, signed earlier that season, but they still had Enrique Mateos and Di Stefano, who respectively scored goals early in each half to kill the final off.

Were Atletico cheated out of the 2016 final? Real took the lead in the early stages through Sergio Ramos, but replays suggested the defender was very slightly offside: would things have panned out differently? Yannick Carrasco equalised, taking the game to penalties: the first seven were scored, but Juanfran missed giving Cristiano Ronaldo the chance to win it… a chance he took.

Before 2017 nobody had defended the trophy in the Champions League era, but if any team was going to do it, it would be Real. They claimed their 12th win in the competition in relatively routine style, despite Mario Mandzukic’s incredible overhead kick making things a little spicy in the first-half. Ronaldo got two, Casemiro and Marco Asensio the others.

The last time these two met was the last time Real lost a final in this competition. Like the previous few, this wasn’t a classic final, a stodgy affair decided by a single goal, scored by Alan Kennedy eight minutes from the end. When they returned to Liverpool, captain Phil Thompson was told he had to take care of the trophy: which he did, by taking it to his local pub and putting it behind the bar.

Vicente del Bosque was only meant to be a temporary Real Madrid manager when he took over in November 1999, but by May he was leading his side to the Champions League. The first time that two clubs from the same country had met in the final, goals from Steve McManaman, Raul and Fernando Morientes beat Hector Cuper’s Valencia 3-0.

By 1966 most of the great Real team had gone, winger Gento aside. Real were actually surprise finalists, having beaten Inter — who were going for their third straight win in the competition — in the semifinals. A young Real team took a while to get into the game, but after Partizan took the lead they came back with goals from Amancio and Fernando Serena.

A curious urban myth surrounds this game, that a 21-year-old Warren Beatty presented the trophy: there is a picture of a young man who could be Beatty, but equally it could be Prince Alexander of Belgium. Which as the final was in Brussels, makes more sense. Anyway, extra-time was required for the first time, Real beating their Italian opponents with a clincher from Gento.

The occasion was special, Liverpool winning their second European Cup at “Anfield South” — or, to everyone else, “Wembley” — but the game wasn’t quite as thrilling. Kenny Dalglish scored the only goal, lifting the ball over Brugge’s keeper and then leaping joyfully over the advertising hoardings. A legend was born.

Defending the European Cup in their own stadium, with Real fan General Franco watching on… let’s just say the fates leant in Real’s favour. Their first goal remains controversial to this day: referee Leo Horn ignored a linesman’s offside flag to award Real a penalty, that looked outside the area. Still, Alfredo Di Stefano scored it, then Gento added another.

Predrag Mijatovic probably shouldn’t have played in the 1998 Champions League final: he had a calf injury but neglected to tell manager Jupp Heynckes, a plan which worked out quite well. Mijatovic scored the winner after 66 minutes, inching around Juventus keeper Angelo Peruzzi and sealing their first victory in the competition since 1966. “It was possibly the most important game in Real Madrid’s history,” captain Manolo Sanchis said later.

Other things happened in the 2002 Champions League final, but they were all insignificant compared to Zinedine Zidane’s goal. “I tried to score the same way again later, even during shooting an advertisement,” Zidane said, years later. “But it never happened again. Never. I tried in training, but it never happened. It was perfect the day it happened.”

Simply written down, it might look like Real Madrid battered their city rivals, but in reality they were seconds from losing the game. Diego Godin gave Atletico the lead in the 36th minute, and they held out until the 93rd. Then Sergio Ramos equalised. And in the second half of extra-time Real ran in three more, breaking their rivals’ hearts.

The European Cup has been decided 11 times by a penalty shootout, but this was the first. Goals from Phil Neal and Roberto Pruzzo left the sides deadlocked after 120 minutes, but when penalties rolled around goalkeeper Bruce Grobbelaar had a plan. His attempts to put the Roma players off, in their home stadium, with his wobbly legs worked as Bruno Conti and Francesco Graziani missed.

The start of an extraordinary few years of English dominance, this was Liverpool’s first European Cup, won at the Stadio Olimpico in Rome. They took the lead in the first-half through Terry McDermott, only for Allan Simonsen to equalise for the Germans. But Tommy Smith put Liverpool back ahead, and a Phil Neal penalty sealed things. “Rome will never fade from my memory,” said McDermott, years later. “I’ll always remember it until the day I die.”

Some teams and countries took a while to figure out the European Cup, but Real were on board from day one. But their remarkable run of winning the first five tournaments nearly faltered in the first, French side Stade de Reims going 2-0 up after ten minutes then 3-2 ahead after an hour. But goals from Hector Rial and Marquitos won it.

How to make sense of the most extraordinary comeback in the history of the competition? In the history of football, perhaps. The odd thing was that Milan basically dominated this game for 114 minutes, but the six in which Liverpool went from 3-0 down to 3-3 were the crucial ones. From there, it was down to Jerzy Dudek to repeat Grobbelaar’s antics in 1984, Liverpool winning on penalties to seal this most incredible story.

The drama of Istanbul nearly took top spot, but this match was such an extraordinary exhibition of football that it has to be No. 1. A young Sir Alex Ferguson was among the 134,000 in attendance at Hampden Park to see this great Real team perform their masterpiece, hammering Eintracht Frankfurt after the West Germans took an early lead. Di Stefano got a hat trick, Puskas scored four; everyone was dazzled and amazed.

England job starting to wear on Southgate. Is he thinking about a fresh start after 2022 World Cup?
Who’s out, who could step up?
Diaz 7/10, Odegaard 6/10 as depleted Madrid draw at Villarreal
Barcelona’s Pique, Roberto face lengthy spells on sidelines as injury crisis worsens
Could Paul Pogba leave Manchester United as a free agent in 18 months’ time?