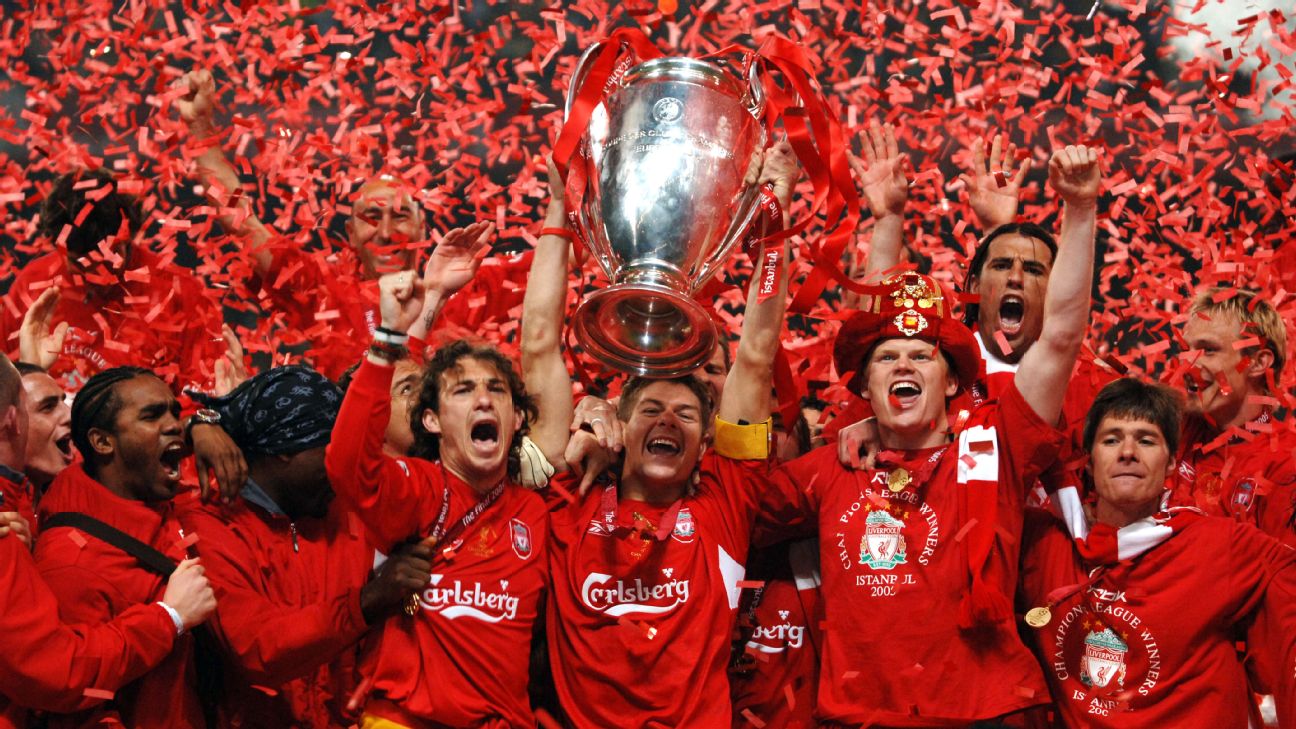 
They are the two most dramatic Champions League finals of the modern era: Manchester United’s stoppage-time victory against Bayern Munich to seal the Treble in 1999 and the so-called “Miracle of Istanbul,” when Liverpool overturned a 3-0 half-time deficit against AC Milan to win their fifth European Cup in 2005. One was achieved by a team — United — that recorded their club’s finest hour; the other was a story of a team — Liverpool — defying the odds to beat one of the great club sides of the time.

With the anniversaries of the two games just 24 hours apart this week — and the 2020 final previously set to be played on May 30 before it was postponed — ESPN looks back at two of the most epic comebacks in sporting history and assesses which one was the greatest.

What was the story of their respective roads to the final?

Man United started out their 1998-99 campaign with a 2-0 aggregate qualifying-round victory against Polish champions LKS Lodz before being drawn into a daunting group alongside Bayern, Barcelona and Brondby. After just two wins and four draws, United finished second to Bayern and only sneaked into the knockout stages as the second of the two best runners-up. From there, they sealed a 3-1 aggregate quarterfinal win against Inter Milan before eliminating Juventus in the semi-final — after fighting back from 2-0 down in the second leg in Turin to win 3-2, and 4-3 on aggregate.

In 2004-05, Rafael Benitez’s Liverpool needed to beat Olympiakos in their final group game at Anfield to qualify for the knock-out stage and, despite falling behind in the first half, secured the required 3-1 win. A routine round-of-16 win against Bayer Leverkusen followed, but then came two momentous clashes against Juventus in the quarterfinal and Chelsea in the semi before Liverpool booked their place in the final.

The 1-0 Anfield win against Chelsea, which proved decisive, was famously sealed by Luis Garcia’s “ghost goal,” with debate still raging 15 years later as to whether the ball crossed the line.

So they got to the final. Were they both favourites to win?

Having played out two draws against Bayern in the group stage, United traveled to Barcelona for the final in the Nou Camp with neither side regarded clear favourites. The Final was United’s third game in 10 days, with the Premier League title being sealed in the first and an FA Cup final win against Newcastle in the second.

Sir Alex Ferguson’s team were unbeaten in 32 games in all competitions — a run stretching back to December 1998 — but Bayern were also on form, having just clinched the Bundesliga title.

In 2005, Liverpool were heavy outsiders against a Milan team containing the likes of Paolo Maldini, Andrea Pirlo, Kaka and Andriy Shevchenko. Liverpool had just finished fifth in the Premier League, behind Everton and level on points with Bolton Wanderers. Benitez’s team lost 14 league games all season and needed to win the final to qualify for next season’s Champions League.

How strong were their teams?

United faced Bayern without captain Roy Keane and Paul Scholes, who were both suspended as a result of yellow cards received in a semi-final against Juventus. Nicky Butt and Jesper Blomqvist were subsequently handed starting roles, but the pair had played 85 games between them that season, making key contributions to a successful campaign. It was a strong team, including the likes of Peter Schmeichel, Jaap Stam, David Beckham and Ryan Giggs and, in attack, Ferguson selected Andy Cole and Dwight Yorke, whose partnership delivered 53 goals all season.

In Istanbul, Liverpool had captain Steven Gerrard in the heart of midfield, but the left side of the team is a concern, with full-back Djimi Traore proving inconsistent in a red shirt. Benitez make a surprise selection by picking winger Harry Kewell ahead of midfielder Dietmar Hamann. Benitez’s tactics have made Liverpool tough to beat, but in terms of personnel, this is not a great Liverpool side.

So what happened during the game? Did they both start badly?

United fell behind after six minutes when Mario Basler put Bayern ahead with a free-kick that wrong-footed Schmeichel in the United goal. From that point on, United struggled to impose themselves on the game, with Ferguson’s team missing the drive of Keane and Scholes’ ball-retention skills. Bayern went close again through Stefan Effenberg and Mehmet Scholl before Carsten Jancker hit the crossbar late in the game.

In Istanbul, Liverpool endured a nightmare start, as Maldini put Milan ahead inside the first minute after a Traore mistake gave the Italians a dangerous free-kick. Kewell then limped off with an Achilles injury after 23 minutes, replaced by Vladimir Smicer, and things continued to go badly for Liverpool. By half-time, Milan were 3-0 ahead after Hernan Crespo scored on 39 and 44 minutes. Liverpool faced humiliation.

OK, so they both fought back to win. How did Man United do it?

There were more than 50,000 United supporters in the Nou Camp, but they were largely silent as Ferguson’s team began to run out of ideas. On 67 minutes, Ferguson replaced the ineffective Blomqvist with Teddy Sheringham, and Ole Gunnar Solskjaer was thrown on in place of Cole on 81 minutes.

Time was running out for United. Bayern coach Ottmar Hitzfeld substituted ageing defender Lothar Matthaus in an attempt to close the game out. At 90 minutes, United were still trailing as the fourth official announced there would be three minutes of stoppage time. Man United had 180 seconds to keep the game alive and score a goal to take it into extra-time … and they won a corner.

With time running out, goalkeeper Schmeichel raced up to the Bayern penalty area in desperation. Beckham swung a corner in from the left, Schmeichel jumped for a header and the ball dropped to Giggs, who hit it back toward goal with his shin. The ball was going wide until Sheringham connected, diverting it into the bottom corner to make it 1-1, 36 seconds into stoppage time.

The game restarted, and within a minute, United had another corner. This time, Schmeichel stayed back to safeguard against a Bayern counter-attack. Beckham swung it in from the left again, Sheringham headed it on at the near post, and, lurking at the far post, Solskjaer stuck out his right foot and sent the ball into the roof of the net.

That was all very dramatic! So what happened in Istanbul?

Liverpool still had 45 minutes to fight back, but it was a Champions League final against a team as mighty as AC Milan. At half-time, the only conversation was about how many Milan would score rather than how Liverpool could find a way back into the game, but Benitez is a cold-headed tactician, and he knew the game is not lost. He replaced right-back Steve Finnan with Hamann, who takes the job of shutting down Kaka and releasing Gerrard into a more advanced role.

The switch paid dividends quickly, with Gerrard breaking forward to score on 54 minutes. He raced to retrieve the ball from the Milan net to ensure that Liverpool did not lose momentum. Two minutes later, substitute Smicer made it 3-2 with a strike into the bottom corner from outside the penalty area.

From being down and out, Liverpool were back in the game and Milan looked stunned. On 60 minutes, just six minutes after Gerrard’s goal, Liverpool made it 3-3 when Xabi Alonso scored from the rebound after his penalty was saved by Dida. Milan did regained their composure and came close to making it 4-3 in normal time, but Kaka and Shevchenko both missed good chances.

Extra-time saw players from both sides go down with cramp as penalties loomed, but in the 117th minute, Shevchenko had a golden chance inside the six-yard box to win it for Milan. Liverpool keeper Jerzy Dudek made a stunning double save from the Ukrainian, though, and the game went to a penalty shoot-out. When Dudek made another save from Shevchenko in the shoot-out, it sealed a 3-2 win for Liverpool on penalties.

Two pretty unforgettable fight-backs, then! So which was the best?

Football is all about drama, and the excitement of teams and players achieving the unexpected. In 1999 and 2005, United and Liverpool not only did that, they also achieved what had begun to seem impossible against formidable opponents.

United had a great team in 1999, arguably the greatest in the club’s illustrious history, so it was more than capable of pulling off such an incredible comeback. Liverpool, meanwhile, went into the 2005 final on the back of a disappointing league campaign with a squad that had clear weaknesses. That said, they did have Steven Gerrard at his peak, and they also had 45 minutes to retrieve what looked like an impossible situation. United, on the other hand, went from losing to winning in the space of three stoppage-time minutes.

Time is both the biggest ally and enemy of football teams, and Liverpool had more time than United. And time is the decisive factor, which is why United’s win in 1999 eclipses — only just — Liverpool’s night of glory in 2005.