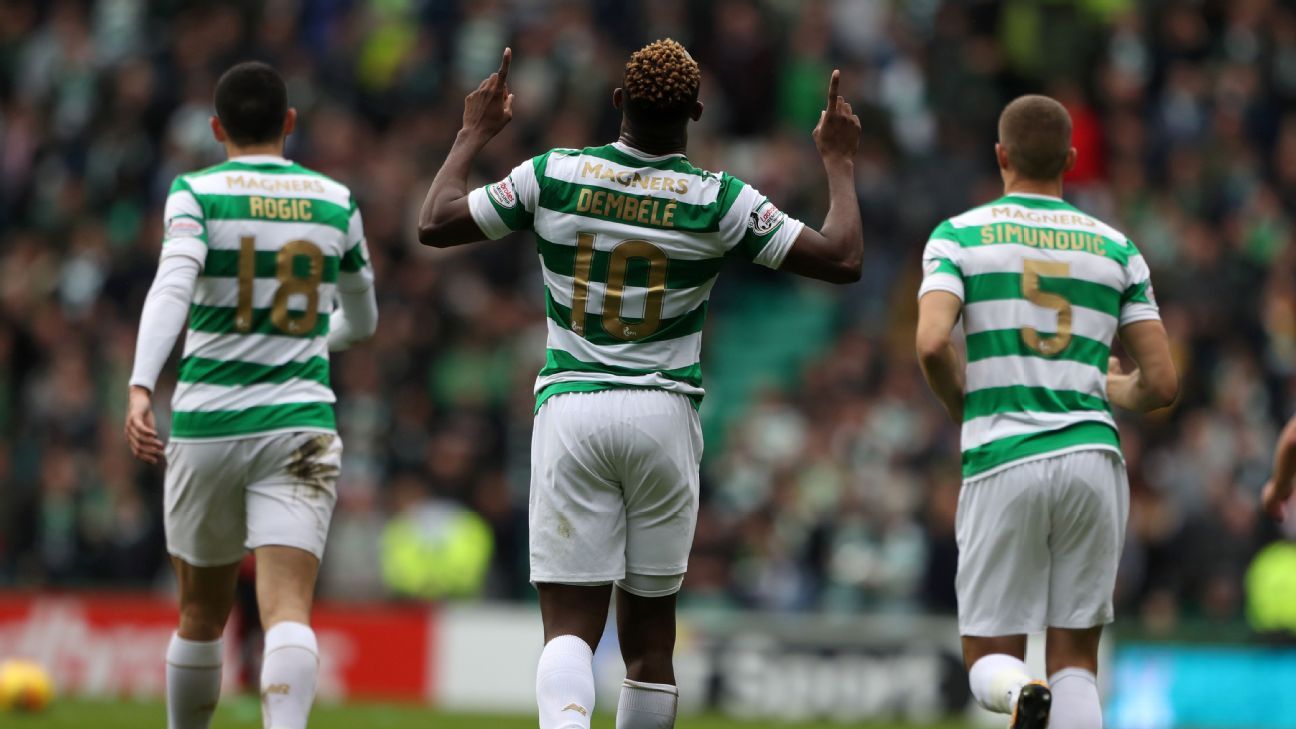 The returning Moussa Dembele scored his first goal of the season as Celtic reaffirmed their domestic dominance with a crushing 4-0 win over Ross County.

Brendan Rodgers’ side were beaten 5-0 at home by PSG in their Champions League opener on Tuesday night but they were more at ease in this Ladbrokes Premiership encounter, with Australia midfielder Tom Rogic driving them ahead in the 13th minute.

Three minutes from the break the 21-year-old French striker, back for the first time since July after recovering from a hamstring injury, fired in the Hoops’ second before winger James Forrest added two more in the second half to extend the treble winners’ unbeaten domestic run to 55 games.

In doing that, Celtic moved two points clear of second-placed Aberdeen and five points clear of traditional rivals Rangers ahead of the Old Firm clash at Ibrox next week, although they first have a Betfred Cup tie against Dundee at Dens Park on Wednesday.

Rodgers was always likely to reshuffle his side in the midst of a heavy schedule with Nir Bitton, Forrest, Rogic and Jonny Hayes also coming in along with Dembele in a bold 3-1-4-2 formation which helped give the home side a stranglehold.

The almost inevitable opener came when Forrest took possession on the right before slipping the ball to Rogic, who drifted inside on to his left foot and from 20 yards fired past County keeper Aaron McCarey.

There were chances for both sides before the treble-winners doubled their lead.

In the 25th minute Stuart Armstrong’s deflected drive from 25 yards was saved by McCarey, Forrest missed the target from 12 yards after taking a Leigh Griffiths pass and County striker Alex Schalk drove straight at Celtic keeper Craig Gordon from 10 yards.

Five minutes from the break, Hoops right-back Anthony Ralston moved forward and crashed a right-footed drive from 25 yards off the post.

The second goal came moments later when Dembele took a Griffiths pass and from just inside the box curled a right-footed drive past McCarey and into the far corner for his first goal since March, albeit mostly due to injury and the close season.

County boss Jim McIntyre replaced Sean Kelly and Ross Draper with Tim Chow and Craig Curran for the start of the second half and five minutes after the restart the latter was played in by Marcus Fraser only to see his drive blocked by Gordon.

The ball fell kindly to Davis Keillor-Dunn but he too failed to beat the Scotland keeper with a powerful drive and within moments of that crucial double save the champions had scored a third.

As Celtic swarmed around the Staggies penalty area again, Rogic’s drive was parried by McCarey but only to Forrest, who knocked the ball into the goal from six yards.

Just before the hour mark Dembele was replaced by Odsonne Edouard, with Callum McGregor on for Armstrong as the home side continued to push forward.

In the 73rd minute, moments after Griffiths had stung the hands of McCarey with a ferocious 20-yard strike, Forrest curled a shot from just inside the box into the far corner to confirm Celtic’s superiority in Scotland.

In the latter stages McCarey made two fine saves from substitute Scott Sinclair, on for Griffiths, but by that time the Highlanders had suffered enough and Celtic’s pride had been restored.